78 years of moving New York, gone with a blast in five seconds

After constructing the first phase of New York City's new Kosciuszko Bridge – providing a safer and smoother crossing – it was time to carefully demolish the original. Here's how we executed the explosive finale.

At midnight on October 1, Pat Tamburri arrived at the old Kosciuszko Bridge. He had worked until about 2 p.m. the previous day but couldn't sleep a wink before starting one of the most exciting experiences of his Skanska career.

No one had ever used explosives to demolish a bridge in the middle of New York City. The removal of the remaining parts of the 78-year-old span crossing between Brooklyn and Queens would come down with 125 kilograms (275 pounds) of explosives at 8 a.m. that day. Pat, a Skanska Vice President, was helping lead the demolition effort.

The "energetic felling" of the old bridge would culminate a three-year process to replace it with a lower and wider link of Interstate 278, providing a safer and smoother crossing . The implosion that Sunday morning required deft coordination of many moving parts and painstaking planning. Everything needed to be done safely and with care not to disturb the natural environment and surrounding structures, especially the new Kosciuszko Bridge just meters away.

The old Kosciuszko Bridge, which opened in 1939, was frequently jammed bumper to bumper with cars and trucks. Also, it was showing signs of decay. In 2014, the New York State Department of Transportation awarded Skanska the contract to design and build the first of two structures comprising the new Kosciuszko Bridge, and to demolish the original bridge.

Once the new cable-stayed bridge opened to traffic last April 27, our focus shifted to removing the original. 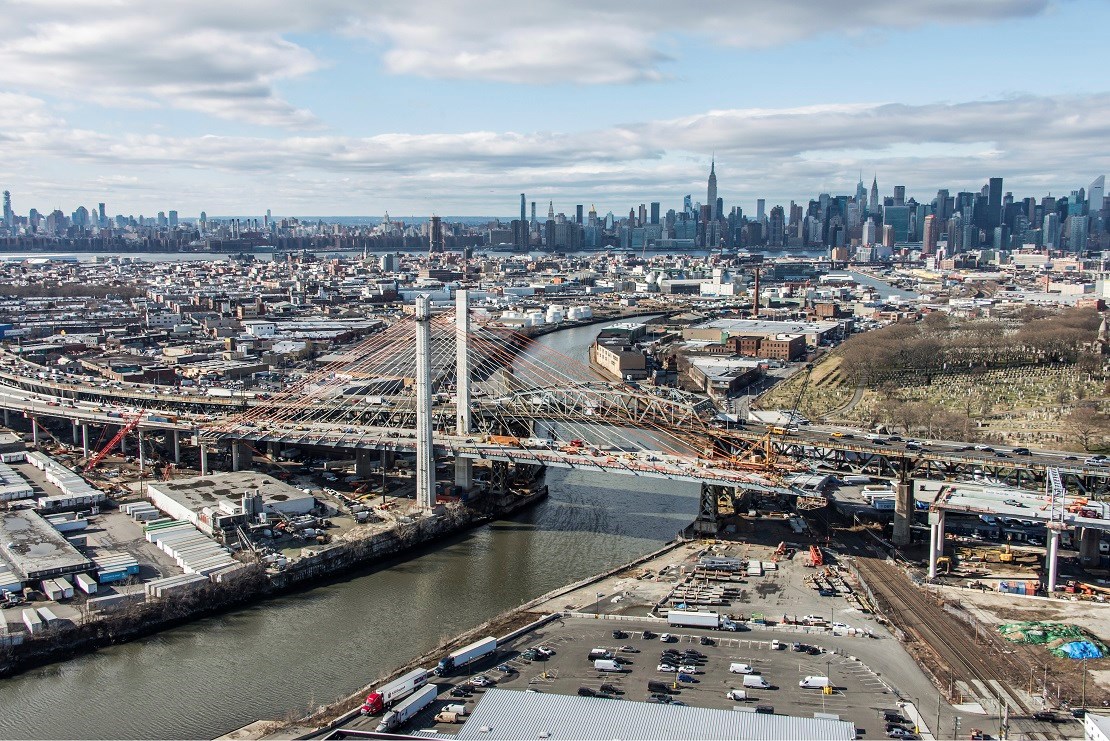 The Kosciuszko Bridge connects Brooklyn and Queens in New York City. The new span, constructed next to the now-demolished old bridge, is the first cable-stayed bridge in the city. Manhattan's skyline is in the background.

For this dramatic phase of the deconstruction, Pat and our team were coordinating with at least 10 city, state and federal agencies, multiple subcontractors and other Skanska colleagues. They had to limit vibration and noise impacts from dropping 22.7 million kilograms (25,000 tons) of steel and concrete to the ground. They had to avoid damage to what ran underneath the bridge, including utilities, a railroad track and two fuel lines. And the blasts had to be over quickly, so as not to impede the relentless momentum of New York City traffic.

To remove the major sections of the old Kosciuszko Bridge, the traditional option was to have workers spend days up in aerial lifts, using torches to slowly cut the steel into pieces. A safer and quicker solution was developed: explosives, which would do the cutting in mere seconds. Giant bridge sections would fall to the ground in a carefully planned way.

“Gravity would do all the work,” says Jessica Miller, a Skanska Project Manager. “It would eliminate so much risk.” 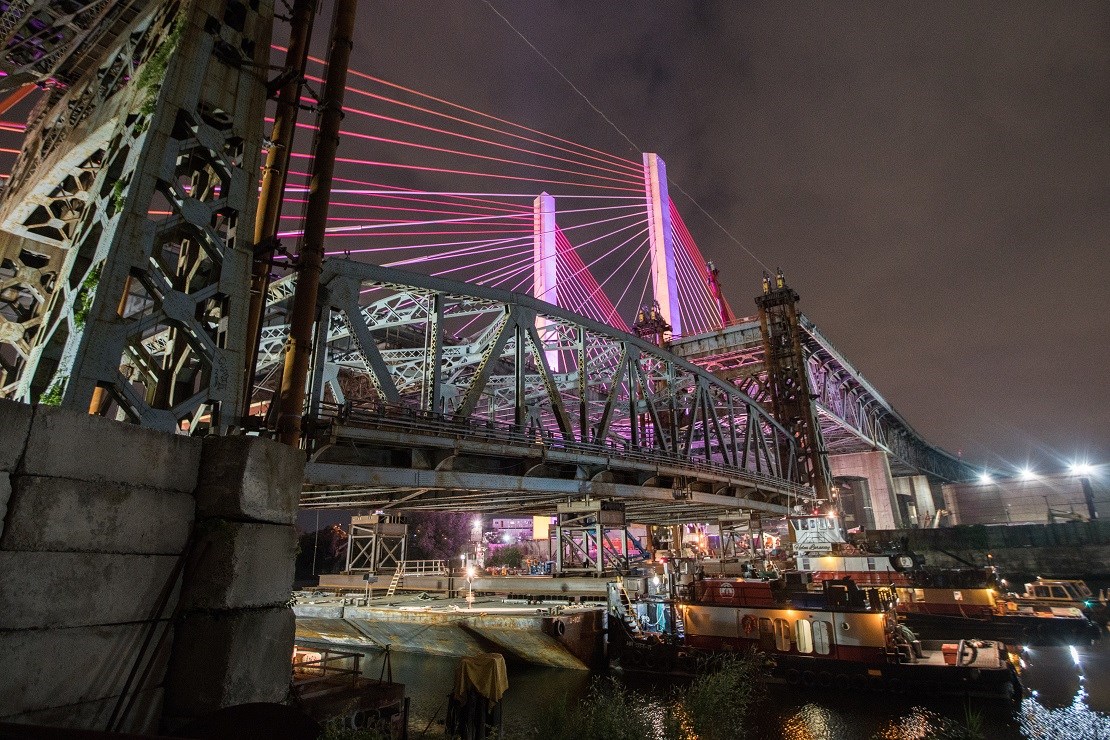 Readying for the big boom

Removing the bridge required extensive preparations. There were many meetings with key stakeholders potentially affected by the process. Some parts of the bridge, such as the blacktop driving surface, were removed so less weight would fall.

On the ground, Skanska added piles of dirt 6 meters (20 feet) high to absorb vibration and the impact from the falling spans. We had to make sure vibration from the dropped spans stayed within a strict limit to avoid damaging nearby structures.

“We went above and beyond to make sure we didn’t have any unexpected consequences,” Jessica says.

Nine hundred forty-four charges, explosive powder wrapped in copper tubes about 46 cm (18 inches) long, were attached at the corners of each steel bridge section. Detonation cords strung the charges together, so they'd ignite one after another in quick succession, like dominoes. The explosives would slice through the steel in a straight line.

“It's like a giant samurai sword came through the bridge and cut it,” Jessica says.

In April, New Yorkers celebrated the opening of the first span of the new Kosciuszko Bridge.

On the day of the implosion, the police set up an “exclusion zone” to keep everyone back a safe distance from the bridge. Preparations were made to halt traffic on the adjacent new Kosciuszko Bridge, which was just about 5 meters (15 feet) from the old bridge in some spots, in the minutes before the final countdown.

Just outside the exclusion zone, Pat stood in one of the operation's command centers. He and others monitored those about to press the buttons to light the explosives.

“My heart was in my throat,” he says.

Gone in less than five seconds

A countdown began. The months of planning and preparation reached their culmination.

Within milliseconds of one another, the series of charges exploded, and the bridge sections quickly descended. The old Kosciuszko Bridge was reduced to scrap in less than five seconds.

“The blast went off, and it was so dramatic that it just took my breath away,” says Larry Gillman, a Skanska Vice President and Kosciuszko Bridge Project Director. “The noise was shocking.”

The vibration measurements came in under the limit. National Grid checked its gas lines and found no leaks.

Skanska released a cleanup crew onto the new bridge to clear debris – mostly copper casings and netting that flew from the charges. Within about 25 minutes, vehicles began moving again.

“I couldn’t be prouder”

Crews will continue to chop up the bridge pieces through December, sending them to scrap yards that will recycle them for new uses, Pat says. He and Jessica continue to wrap up the project from the site office underneath the new Kosciuszko Bridge.

“When I look outside now, the old bridge is down and the new bridge is a dramatic part of the skyline,” Jessica says. “I couldn't be prouder.”

Move the cursor to view the explosive finale of the old Kosciuszko Bridge in New York City. Five strategically-positioned 360-degree cameras allow you to walk around the scene.

Learn all about the Kosciuszko Bridge in New York City.

Bridges around the world

Our expertise in bridges connects communities and society.