A bold and innovative addition to Boston

Shaping our latest tower in Boston as an ellipse has produced the city’s newest icon, with benefits that go far beyond aesthetics. It’s only part of our innovative approach to this project, which continues our work transforming the neighborhood.

It’s a building impossible to miss. In a boxy city, 121 Seaport stands out as a 17-story ellipse in the fast-growing Seaport District of Boston, USA.

But the bold, curved look of this iconic office tower provides benefits far beyond aesthetics.

121 Seaport is targeting top-level LEED Platinum eco-certification. Further helping this ambition is a system to collect and reuse rainwater to flush toilets, which will reduce water use by about 30 percent, and a highly efficient “chilled beam” heating and cooling system.

The office floors are nearly free of columns to provide maximum flexibility and abundant natural light, and a condensed building core – elevators, toilets and such – means more space to be truly used. This all provides greater value to the companies soon to occupy 121 Seaport, along with more grand views of Boston Harbor and downtown. 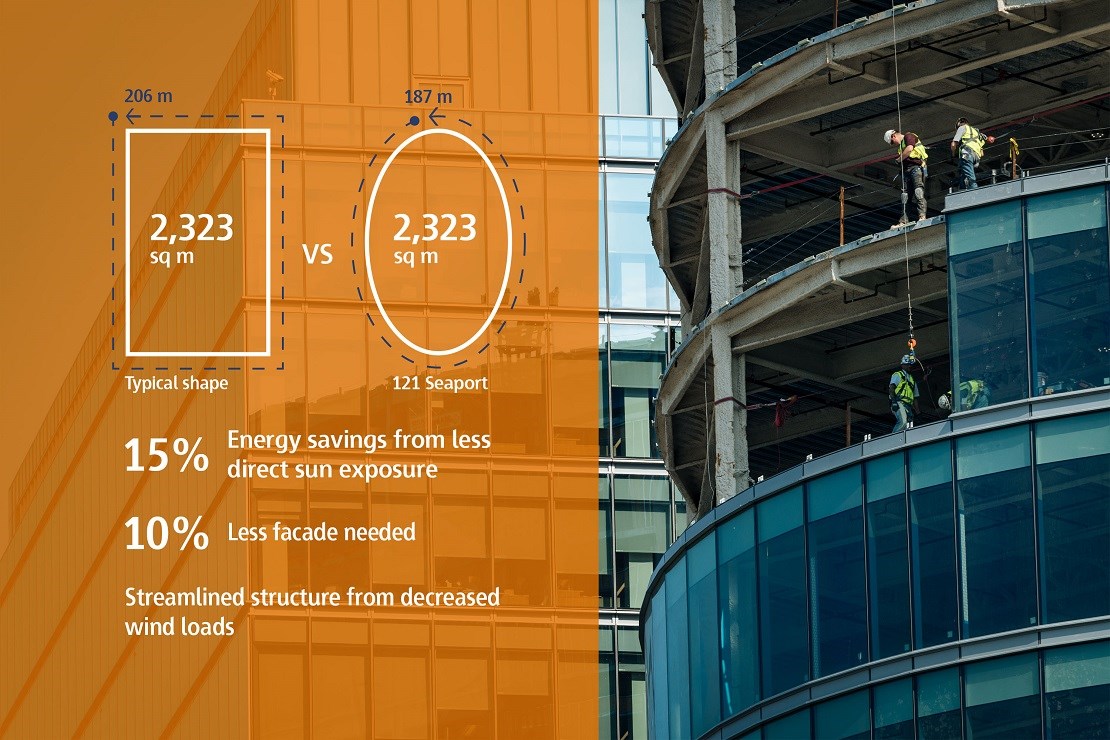 Key benefits of the elliptical shape of the 17-story 121 Seaport office tower.

To speed 121 Seaport’s construction, we used an uncommon approach called up-down construction. With this, we simultaneously excavated the below-ground levels and created the foundation as we erected the steel superstructure. Normally, buildings advance only in one direction – skyward.

This dual-direction approach required careful choreography and planning. For example, the steel work couldn’t progress ahead of the foundation available to support the growing – and increasingly heavy – structure.

Key to this precise work was using an advanced digital model, which was also essential for planning a smart approach for another challenge: building adjacent to a subterranean transit tunnel.

From parking lots to thriving destination

We are soon completing 121 Seaport, with the entire 42,000 sq m (450,000 sq ft) structure already fully leased. It adjoins two other commercial developments delivered by Skanska since 2015: the 17-story 101 Seaport office building and Watermark Seaport, with 346 apartments.

This row of buildings forms a central spine in the bustling Seaport District. Just a few decades ago, this neighborhood was a decrepit industrial area, and even in 2013 when we began constructing our first Seaport project it was still mostly parking lots. Now it is a thriving destination, filled with offices, condominiums, stores and restaurants.

A space for all

Skanska has been a central part of this transformation. A final contribution will be a public park, a 21 meter (70 feet) wide pedestrian destination between our two office developments. It will be an interactive walking museum telling the history of the neighborhood, which from the late 1800s to the mid-1900s had been a busy port. That history surfaced during 121 Seaport’s construction, when we uncovered the remains of a roughly 200-year-old wooden ship. Learn more on Skanska USA's website about the shipwreck discovery at the Seaport project site.

“It makes me proud that we helped bring the vision of the Seaport District to reality,” Carolyn says.

With 346 apartments, the LEED Gold-certified Watermark Seaport is bringing a new level of stylish living to Boston.