After the storm, rescuing this highway

One of southern California’s strongest storms in years washed away part of a critical highway, even causing a fire truck to fall off the roadway. Here is how we worked around the clock to get people’s journeys – and lives – back to normal.

It was the strongest storm in years to hit southern California.

Arriving on a Friday during the evening rush, up to nearly 10 inches of rain would fall over the next 48 hours. Highways flooded, forcing their closure and leaving some drivers with no choice but to abandon their cars. Other vehicles had less luck: falling into sinkholes that suddenly opened up in the middle of roads. Intense winds toppled thick trees and knocked down power lines, leaving nearly 80,000 people without electricity.

And in an especially surreal scene, a fire truck with its engine running and orange and red emergency lights flashing tumbled off the edge of a highway. Floodwaters carrying boulders had washed away the supporting ground, but at least the crew escaped unharmed before the fall.

The next morning, Steve Downs was at home watching news of the devastating storm on his TV. He saw video of the fire engine falling, which occurred on Interstate 15 at an area called Cajon Pass.

“I thought, ‘Oh my gosh, that is a mess,’” says Steve, a Skanska superintendent. “That is going to take a while to clean up.”

Soon after, his phone rang. It was Steve’s boss: he was needed on I-15 where the fire truck had fallen. Skanska had a roadway to rebuild – that mess was now his to fix. There was no time to waste. 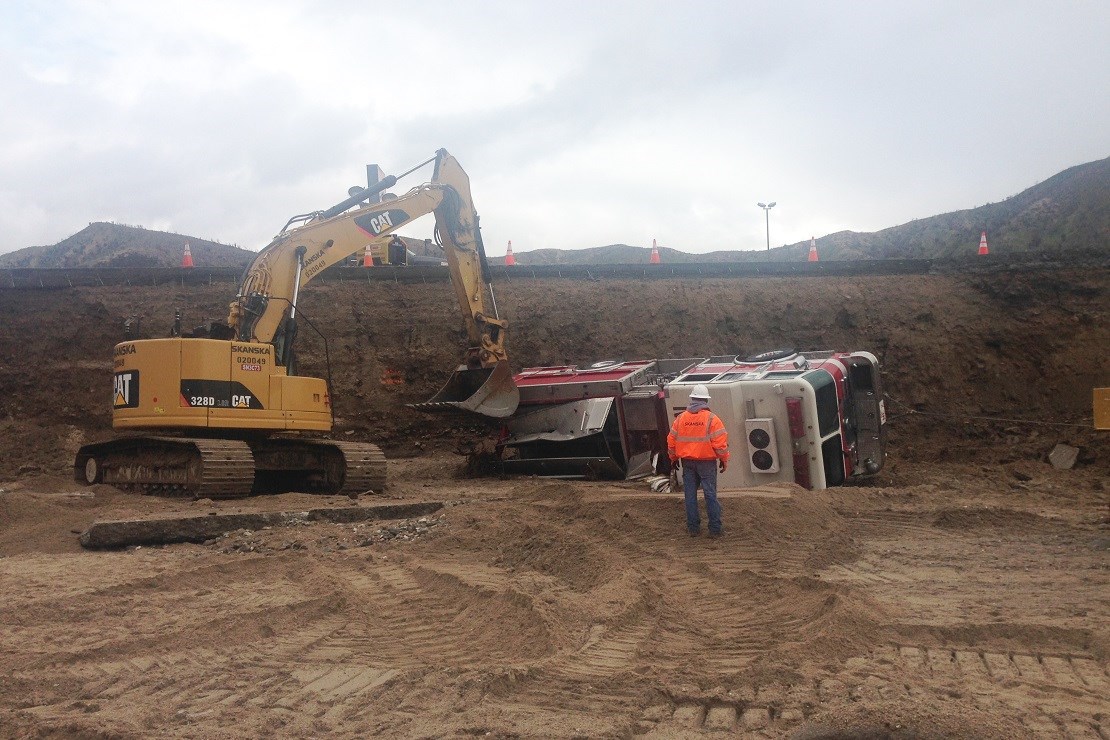 "It was quite clear how much work we had to do, and how quickly we had to do it,” says Project Executive John Matich. “And so our attitude became, ‘Let’s make it happen.’”

Interstate 15 has four lanes in each direction as it climbs through the rugged San Gabriel Mountains to link Los Angeles to Las Vegas and beyond. It carries tens of thousands of vehicles a day, serving as a linchpin in the region’s economy.

And now it was hobbled, as three of the southbound lanes were closed. That’s because there was a gash in the roadway measuring 400 feet long, 75 feet wide and 15 feet deep. The highway’s outer shoulder and an adjacent on-ramp and lane for traffic had washed away, and more lanes were closed because of safety concerns. Traffic was stuck in hours long backups, as the only detours were hundreds of miles long.

Steve and his supervisor, Project Executive John Matich, were at the broken stretch of highway within an hour after the California Department of Transportation (Caltrans) reached out to Skanska to handle this repair. Skanska has worked with Caltrans in that area for many years, and have secured a position on their list of “on-call” contractors for emergencies like this.

Upon arriving on the site, Steve and John stood with a Caltrans construction manager near the edge of the broken roadway to assess the situation. They gazed down on the brown, washed-out expanse. At the bottom was the fire truck, laying on its side in the mud.

"It was quite clear how much work we had to do, and how quickly we had to do it," John says. "And so our attitude became, 'Let's make it happen.'" 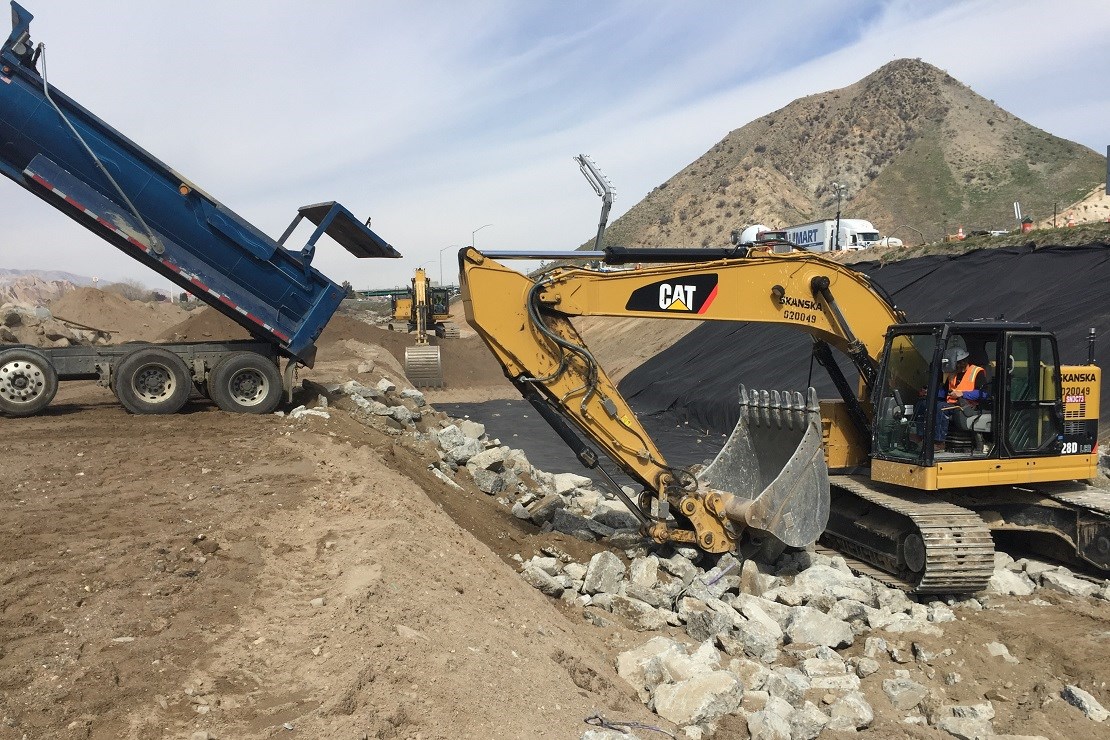 It was critical to line up the workers, equipment, materials and subcontractors so work could start within hours of Skanska being notified of the washed-out highway. Every person we contacted committed to help. “Nobody thought twice,” says Project Executive John Matich.

An approach built on trust

Normally, what is to be constructed is planned and designed well in advance. Needs for materials, workers and subcontractors are analyzed and organized in structured ways. Emergency projects compress those schedules dramatically. Yet the work still must be executed with skill, and still be done while ensuring the safety of workers and the traveling public.

For this project, Skanska and Caltrans agreed to a very general scope of work: rebuild what was washed away, and don't spend more than a set amount to do so. "That was the extent of plans for the job," John says. And it was initially a verbal agreement, an oddity in today’s world.

It was enough to start work. A written contract for USD 3 million wasn’t finalized until several days later. “Caltrans completely trusted us to follow the concept of what we needed to do,” he adds. 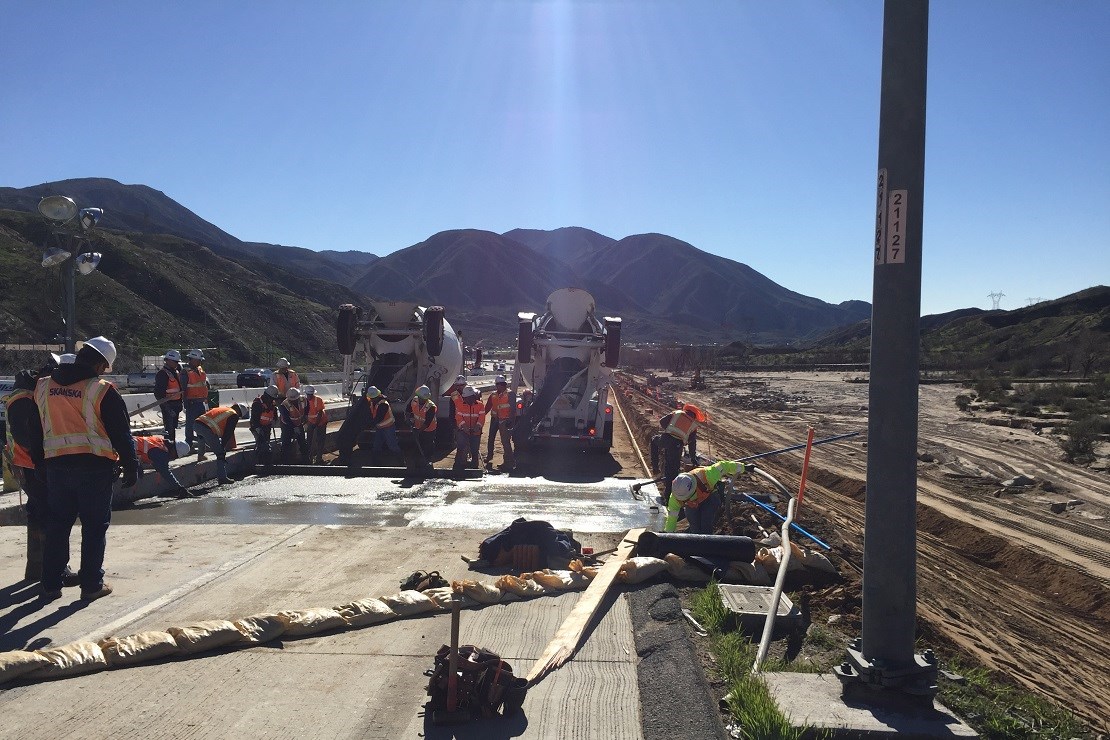 Despite pressure to complete the work quickly, our team was committed to keeping everyone safe. “We worked in a manner that we were going to get as much done as quickly as we could, but safety was first,” says Superintendent Steve Downs.

“Everyone showed up to help”

Critical to the repair was lining up the workers, equipment, materials and subcontractors so work could start within hours. John, Steve and others began reaching out throughout Skanska and beyond.

The needs were substantial, given the short timeframe. Enough people had to be secured to manage and work two shifts, 24 hours a day, until the road was restored. (Eventually, some 40 Skanska people were working on the site.) Excavators, bulldozers and other heavy equipment had to be delivered from other Skanska locations. About 25 trucks were needed for hauling dirt. And to create the 12-inch-thick replacement road deck, a special concrete mix was needed, one that could handle traffic within 24 hours, 14 days earlier than a standard recipe.

The calls for assistance started going out on a Saturday morning. People had started their weekends. Still, the responses to those calls were the same. Many people asked to work live not far from the site of the washout, and wanted to be part of restoring their community – it was their families and neighbors who would be stuck in the traffic.

When one Skanska equipment operator took the call from Steve, he was with his fiancé as they drove their RV to the beach. He told his fiancé they needed to turn around.

“Nobody thought twice,” John says. “Everyone had plans that day, and everyone showed up to help.” 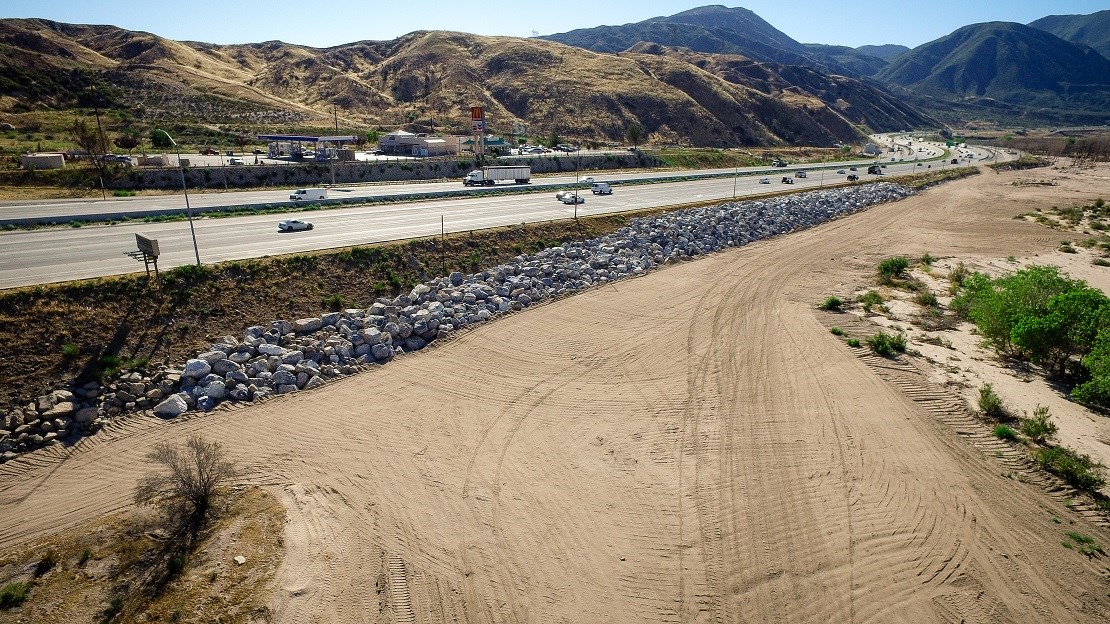 Perhaps the best indicator of the project’s success is this: “People driving there today don’t even realize that anything happened,” says Project Executive John Matich.

Work began that Saturday afternoon and didn’t stop for 12 days.

An early task was using one of our hydraulic excavators to help the fire department remove their fallen rescue unit. By evening of the first day, our team was setting up waist-high concrete walls to safely separate traffic from the work area. By 4 a.m. the next day, Sunday, all four lanes of southbound traffic were again moving, just slower than normal: we had temporarily restriped the lanes, making them narrower to fit into the remaining width of roadway. By Sunday evening, 15 long trucks were delivering dirt to the site every hour to fill the collapsed road section.

Despite some pressure to complete the work quickly, our team was committed to keeping everyone safe. Before starting work every shift and before each new activity, Skanska’s normal planning was done that considers how to avoid or mitigate any risks. Daily meetings enabled everyone to understand what was happening each day to help them work safely.

“I didn’t want people to take shortcuts,” says Steve, one of two superintendents managing the work. “We worked in a manner that we were going to get as much done as quickly as we could, but safety was first.”

The following Saturday, a week from when work began, the first section of 12-inch-thick concrete road pavement was poured. Then on the 12th day after work began, the I-15 section was ready to reopen to cars and trucks.

Our team had developed a plan and then executed it in a smooth manner. “Everything came together perfectly,” John says.

But perhaps the best indicator of the project’s success is this: “People driving there today don’t even realize that anything happened,” he adds.

Committed to our customers

One of our values is helping our customers be successful.

Improving society through our projects

We develop and build for a sustainable future, with the ultimate goal of improving our society and people's lives.