Breaking through to speed millions of journeys

After 21 months of tunneling through Norwegian rock, success was just 1.5 meters away, through a final rock face. On August 29, our Ulriken Tunnel team crossed that final distance and became stars, if just for a day. Join them as they complete this major effort to eliminate a bottleneck on a busy rail line to the country’s capital.

After coaxing along a rock-chewing behemoth named Ulrikke, as long as 1.5 international football fields and one of the largest of her kind. After carving out enough of Norway's hardest rock to fill 50,000 trucks. And after this high-performing team developed out of about 170 workers representing 12 nations. After all this, they had reached the end of their journey.

Reaching this point in the western Norway city of Bergen had been this team's focus since they began this operation on December 4, 2015. They were boring a new railroad tunnel through the base of Mount Ulriken. The existing tunnel is well over capacity with some 130 passenger and freight trains using it every day – it is known as Northern Europe's busiest single track railroad line. This new tunnel, parallel to the first, will undo this bottleneck, speeding the journeys of millions of people for decades to come.

This Skanska and Strabag team had tunneled 7.7 kilometers, but they had a final 1.5 meters to go. On this day, August 29, they would cross that remaining distance. They would break through the last section of rock, see the sunlight and hear the cheers from the roughly 1,000 people awaiting them.

This would be a day unlike any other on this assignment. The preceding months were focused on prodding Ulrikke to grind away just a bit more granite and gneiss rock. It was work done out of sight, and out of the spotlight. But on this day, the team and Ulrikke were stars. With such a crowd and so much media attention – including live broadcasts on Norwegian TV – this last bit of tunnel boring needed to go exactly as planned.

The 14 crew members operating Ulrikke arrived at their normal time of 08:00. Out of all the crews operating Ulrikke nearly around the clock, seven days a week, these were the lucky ones who would get to feel the extra pride of taking down the final rock section. They made sure Ulrikke was ready. Fired up her engines. Tested the operation of her cutterhead, her rotating front section with 62 "cutting discs" across the 9.3 meter surface. Examined the conveyor system that hauled all the rock away, and the hydraulics and "grippers" that pushed her forward. She – and they – were ready to go. 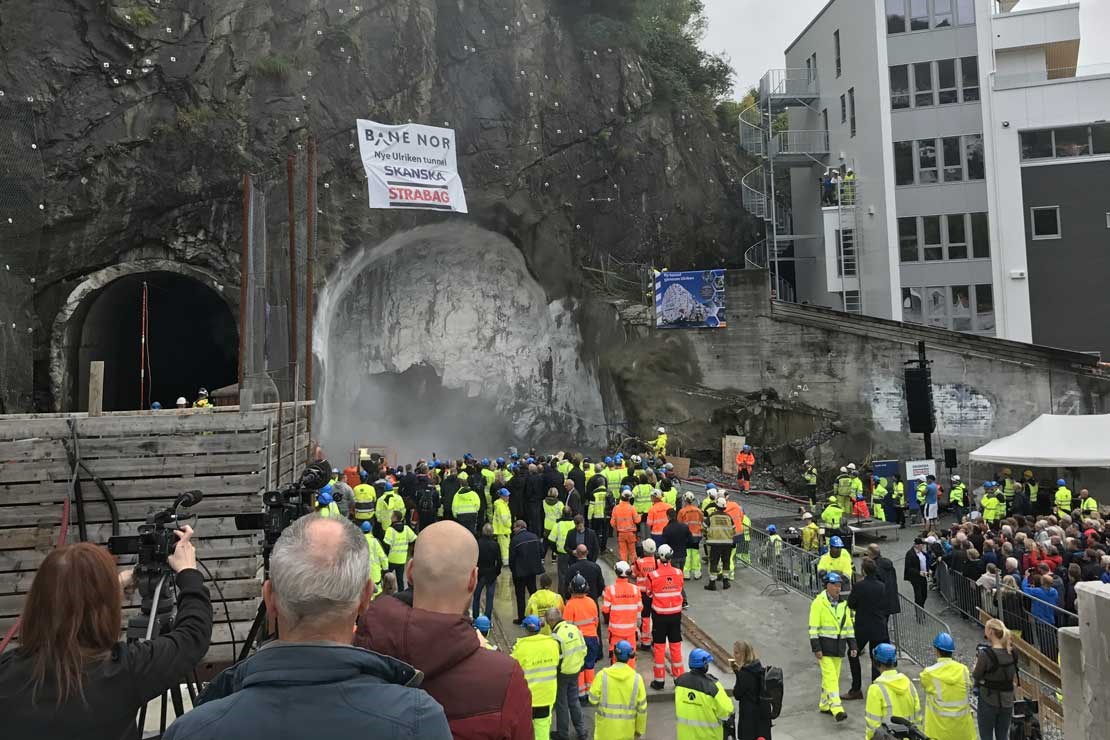 Ulrikke the tunnel-boring machine breaking through precisely where she needed to be. Homes are above and on the right, and a train line is on the left.

Waiting for the go-ahead

Then it was time to wait. The crew needed the go-ahead from the project manager on the other side of the rock face. He would signal when the speeches were over and the crowd was ready for the main attraction. In the meantime, the crew drank coffee. They prepared the flags from their countries that they would wave once outside. Some even watched the ceremonial festivities not far away on Ulrikke's monitors via a live stream.

At 10:30, the call came. "We are waiting for you outside here," said Project Manager Torbjørn Tveit Bakketun. "Please fire up your engines." The crew restarted Ulrikke, and she began pressing ahead.

The normal Bergen rain held off as school children, politicians, curious residents and others waited in a secure area. They could hear a boring sound from behind the rock face, and feel a gentle vibration from the ground. To build excitement, speakers blared the hit song, "The Final Countdown."

Soon, small rocks began falling from the vertical section. An hour after Ulrikke began her day's work, a section of rock gave away, revealing her slowly spinning, metallic cutterhead. More and more, sections broke away. After 30 more minutes, the gigantic Ulrikke was fully revealed. Her work was done.

Soon, an access panel in the cutterhead opened and Ulrikke's crew began climbing out through the narrow opening. They came headfirst in their yellow work uniforms, and seemed small when standing in front of the giant they had just been operating. They waved their flags – from such countries as Sweden, Norway, Austria, Poland and Germany – and pumped their arms in the air. Another song was playing now: "We Are the Champions."

Tobias Andersson, one of the managers responsible for operating Ulrikke, reflected on the moment.

"This is what we have been looking forward to the whole 21 months of tunneling," he said. "We have done what we set out to do." 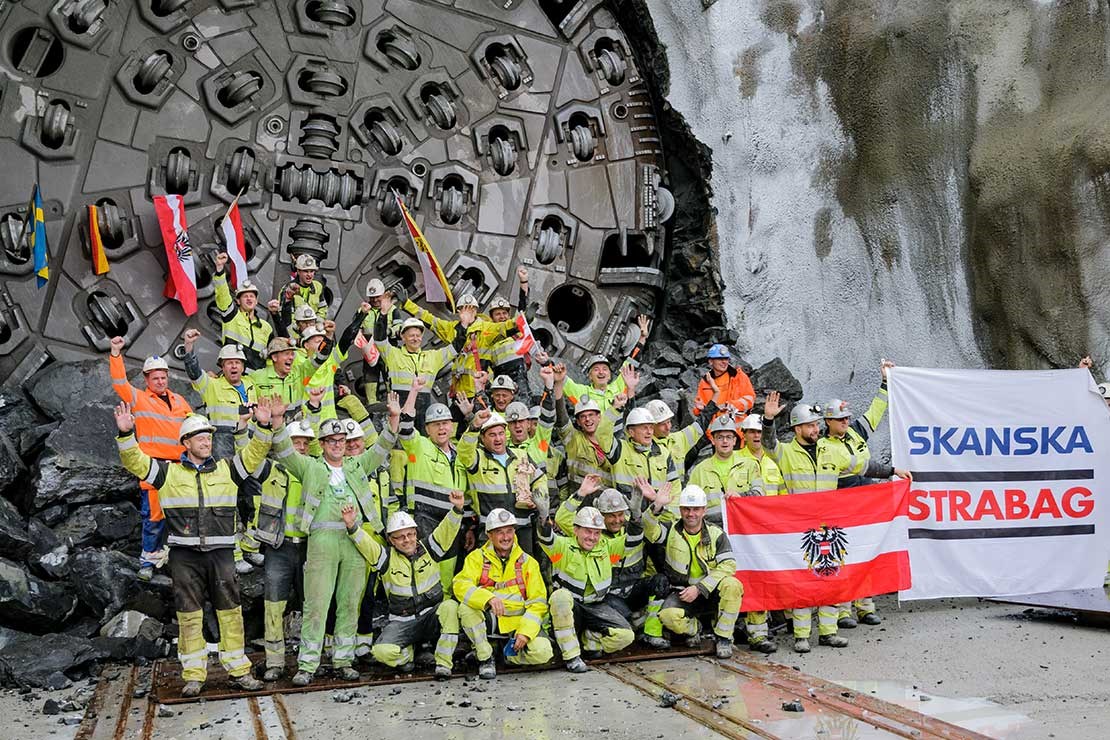 Tunneling around the world

Our expertise in tunneling is helping communities worldwide.

Skanska is delivering some of Norway’s most significant building and civil infrastructure projects.