The World Trade Center Transportation Hub's Oculus has a simple elegance, with steel columns that gracefully rise from the ground to become wings that hover up to 205 feet in the air. Behind that simplicity was an incredibly complicated construction effort. 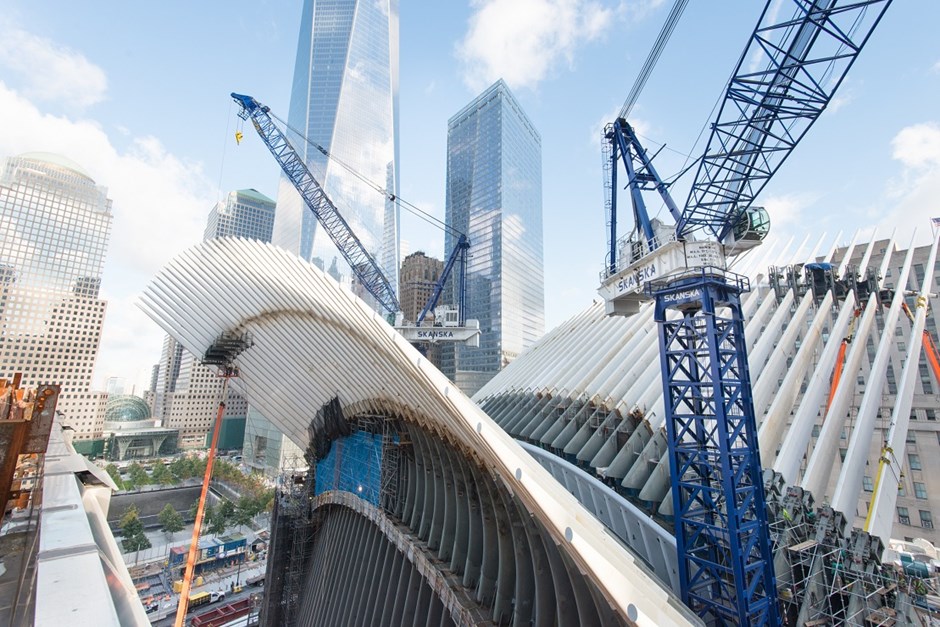 1 / 3 –Skanska used two of the largest-capacity tower cranes ever deployed in New York City to erect the Oculus entrance to the World Trade Center Transportation Hub. 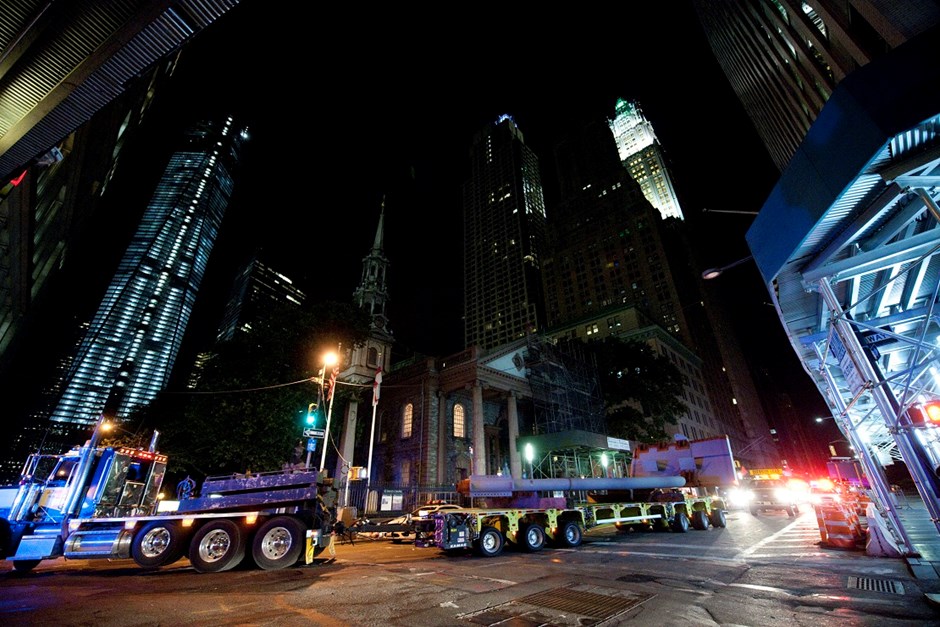 2 / 3 –Moving the Oculus' large steel pieces from Italy and then through New York City's streets involved complicated logistics. "Getting the steel to the site was almost as complicated as putting it up," said Project Executive Pat Tamburri. 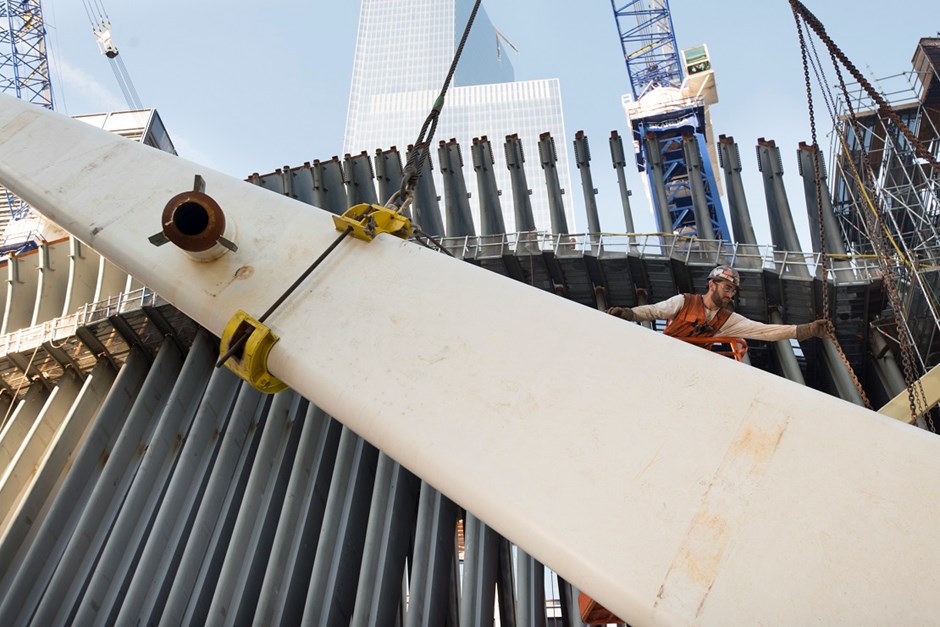 To erect this project's structure, Skanska had to master such challenges as navigating 100-foot-long steel pieces through New York City's streets, and solving the intricate geometry that made it possible for the Oculus to convey the intended look of a bird in flight. And for our ongoing work constructing the rest of the World Trade Center Transportation Hub, the complexities we faced included building the PATH commuter train station under, over and around the No. 1 subway line, which remained in service.

With the Oculus set to partially open to the public today, here’s a look at what it took to safely overcome some of the biggest construction challenges.

Nearly all of the Oculus' 11,500 tons of structural steel – enough to build 270 subway cars – was fabricated in Italy, and from there it was shipped via ocean-going freighter to a Brooklyn port. It was just seven miles from that dock to the Lower Manhattan project site, but that distance seemed to be much longer.

The trucks hauling these monster steel segments would depart the port terminal at 11 p.m., often escorted by the flashing lights of police cars. Every delivery needed to be successful: turning back really wasn't an option with oversize steel pieces up to 23 feet wide. So twice a day – once during the daytime and once just ahead of the delivery convoy – we would drive the route, looking for whatever might impede that night's shipment, especially vehicles. After all, with New York's fast pace, things move all the time. If a vehicle was blocking the route and we couldn't find the owner after some door knocks and phone calls, a tow truck that was part of the delivery convoy would move it out of the way.

In the end, all 588 steel components successfully reached the World Trade Center site, one or two pieces per night.

"Getting the steel to the site was almost as complicated as putting it up," said Project Executive Pat Tamburri.

Assembling the Oculus required brains as well as brawn. Our in-house structural engineers worked with outside consultants to develop an erection approach that balanced what was needed geometrically with what was most feasible for construction.

We believed our erection approach – in which the Oculus supported itself as it was built, with few temporary supports – would result in the best finished structure. It went like this: as every new steel component was added, the additional tons would cause the structure to deflect ever so slightly. So with every component, we surveyed and analyzed the structure, using that information to guide our plan to place each subsequent piece.

Gusting winds and the steel's normal expansion and contraction in the hot and cold also caused tiny movements, further challenging the erection process.

Putting the Oculus together was like a game of chess, said Survey Manager Larry Guli. "We played this game every day amid constantly changing conditions," he said.

"For pieces this big and heavy, that was unheard of," Tamburri said.

Even more, 70 percent of the connections would be welded, taking away the room for adjustment that bolted connections provide. (Some of the Oculus' welds are four-inches thick, requiring a month for each to be completed.) Our use of 3-D building information models (BIM) to help us visualize the structure ahead of construction was key to ensuring accuracy.

Much of the Oculus' erection took place over two shifts working six days a week, with 140 ironworkers at the project's peak. We wanted everyone to go home safely each day, so caring for life was our focus from initial project planning through to everyday steel erection. Safety was especially critical as so much work was done from great heights, including from some of the tallest aerial lifts made.

Guiding Skanska's safety performance is OHSAS 18001, an international standard for health and safety management under which nearly all of Skanska worldwide is certified.

As Skanska erected the Oculus' steel above ground, below ground we continued to build the main part of the Transportation Hub, the PATH Hall with its four platforms for commuter trains to New Jersey.  (Our PATH Hall work continues today.)

This project included helping construct what was essentially a 1,000-foot-long bridge to support the active No. 1 subway line 70 feet in the air as it crossed the site. We worked nonstop from midnight on Fridays until 5 a.m. on Mondays, which was the only period that portion of the subway was taken out of service. By using an innovative top-down construction approach, we shortened that activity's schedule by several months.

Building new amidst the old

On the congested World Trade Center site, building the new PATH Hall has meant accommodating the more than 100,000 people a day using a temporary PATH station in the same location. That's required a sophisticated series of phasing that's also been aided by BIM.

And we overcame the wrath of Hurricane Sandy, which in October 2012 deposited more than 200 million gallons of water on the World Trade Center site. Flood waters reached 40 feet high inside the PATH Hall.

"Skanska builds a lot of exciting projects, but when you say you work at the World Trade Center, everybody knows why you are there," said Vice President John Cubala. "That makes us proud."