Coaching construction to a digital future

Imagine being able to help transform an industry. Construction is going digital in how projects are delivered, and our digital coaches are guiding the way. Linn, a digital coach in Stockholm, explains what it’s like to spearhead this exciting change.

Imagine being able to help transform an industry. That's what Linn Areno and her fellow "digital coaches" in Skanska’s construction unit in Sweden get to do every day. They help colleagues use technology to create hospitals, schools, offices and buildings of all types in more effective and efficient ways.

There's much to be done. Construction is among the least digitized industries, due to traditionally conservative approaches and fragmented ways of working. But as the world goes increasingly digital, construction has begun to catch up. Now, delivering projects increasingly relies on smartphones and digital models that preview what will be built, sometimes through virtual reality.

Digital coaches are the guides to integrating this digital and mobile realm with a culture more familiar with concrete and steel.

"A lot of the site workers are site workers because they want to work with their hands, and not do a lot of digital stuff," says Linn. "But once they start seeing the iPad as a tool, just like a hammer is a tool, then it's quite nice. They see they can do a lot more with it."

Skanska Sweden's six digital coaches are hands-on interfaces between project teams, software suppliers and the IT department. They encourage, support and further develop the digitalization of work methods throughout all project phases, from procurement and design through construction and handover to the customer. Through digitalization, we want to make work more efficient, safe and inclusive – and even more fun.

"What really makes my days worthwhile is helping make life easier for people," says Linn. "They should be able focus more on their areas of expertise, and not have to do so many boring tasks – like data entry – over and over."

Linn leads an academy for digital point persons on Stockholm projects. Skanska Sweden is taking a broad, basic approach to digitalization that aims to get everyone on project sites involved and comfortable with easy-to-use digital work methods.

In the Stockholm region, Linn works with 15 projects ranging in size from a handful of people to hundreds. The digital competence varies, she says. Some project teams are using digital tools at an advanced level, such as gathering designers, builders and other stakeholders in a big room to jointly review detailed 3-D models ahead of construction, proactively addressing issues before they become problems.

Other projects are at more basic levels, such as using mobile devices while on project sites to access design documents. All levels of digitalization are important.

"The right tool is not always the most advanced," Linn says.

One project she's supporting involves the planning of three research and teaching buildings for a new university hub in Stockholm. Every Monday morning, she spends about three hours with our digital point person on that project to discuss recent accomplishments and next steps.

"I'm usually on a major project for three or four years, and during that period I don’t have time to go look at what our other projects are doing," says Anton Matsjons, a Skanska work leader on that university project. "But through Linn, I'm able to learn from Skanska projects all over Stockholm and Sweden. We can incorporate the best pieces from those projects on this project."

"Aiming for something better"

Linn has been a digital coach since Skanska Sweden began this initiative in early 2017. With her interests in driving change processes and staying up-to-date on new technological developments, it's a role that suits her well.

"The best part of my work is seeing colleagues use technology to help them succeed, especially those who didn’t think they would like it," says Linn. "The second best thing is being part of a group working for and aiming for something better."

The biggest barrier to digital adoption is often experience, Linn says. People get quite secure in their ways of working and become hesitant to change. In such situations, Linn has found it's best to identify a person on that team who enjoys digital and can influence others. 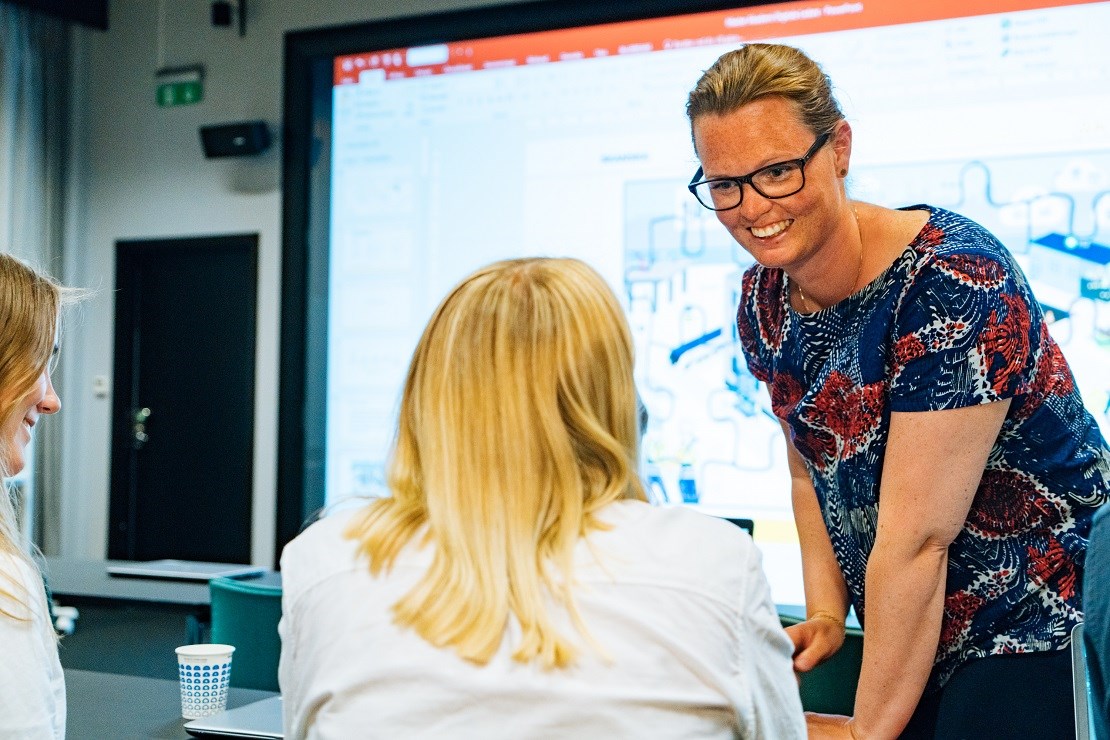 “The best part of my work is seeing colleagues use technology to help them succeed, especially those who didn’t think they would like it,” says Linn. “The second best thing is being part of a group working for and aiming for something better.”

Skanska Sweden is taking a broad, basic approach to digitalization that aims to get everyone on project sites involved and comfortable with easy-to-use digital work methods. Many people each doing just a little more digitally offers huge opportunities for saving time and money.

Key to finding – and creating – the most appropriate digital solutions is engaging with partners.

Skanska Sweden recently hosted a two-day "Think Tank" session to brainstorm potential solutions with some 30 representatives of key tech suppliers, including Autodesk, Bluebeam, Microsoft and Samsung. It’s part of a long-term collaboration that is expected to lead to some pilot projects being launched this fall.

"Partnerships create something much better than we could do by ourselves," Linn says.

When asked where she sees Skanska Sweden's digital efforts being in five years, Linn pauses to think.

"Technical wise, I have no clue," she says. "If we look back five years, we used CD-ROM disks and now we don’t even have those units on computers and people don’t even know what those disks were for."

She adds: "But organizationally, I don’t expect that the digital coach role will exist in five years. It won’t be needed – digital will be a core part of our company."