Creating a planet-smart way to flush

Why use drinking water to flush toilets? With water forecasted to be less consistently available and more expensive in many places, in the Czech Republic we are pioneering a water re-use system that makes each flush more environmentally responsible.

It was a summer visit to his small cottage in the Czech Republic's highest mountains that caused Petr Dušta to rethink one of the biggest – and most wasteful – uses of drinking water in homes around the world: flushing toilets.

His cottage sits beside a small stream that supplies it with water, clean mountain water that's pure enough to drink just as it is. But in the warm, dry months that stream nearly disappears, and from the trickle that’s left it can take about an hour for the toilet tank to refill after each flush. Each six liter fill up of that tank means that much less water available for drinking and other uses.

Surely, Petr thought, there must be a more responsible way of flushing toilets, especially as water is increasingly scarce in the Czech Republic and other lands. By 2025, half of the world’s population will live in "water stressed" areas, according to the World Health Organization. And with more and more urbanization, adapting buildings to use water in smarter ways is a big opportunity to be ready for a future in which fresh water is likely both less consistently available and more expensive.

Petr was the perfect person to explore new solutions. A senior project manager with Skanska, he was leading the development of two adjacent apartment houses in Prague, 163 living units in total. As the planning of this project, called Botanica K, was in its early stages, new ideas could be explored. Petr envisioned reusing water within each apartment building. The water flowing down the drains of showers, bathtubs and bathroom sinks – water only slightly dirty – could receive basic water treatments, such as filtration and disinfection. Then this treated "grey water" could be piped back into bathrooms to use to flush toilets, rather than drinking water. 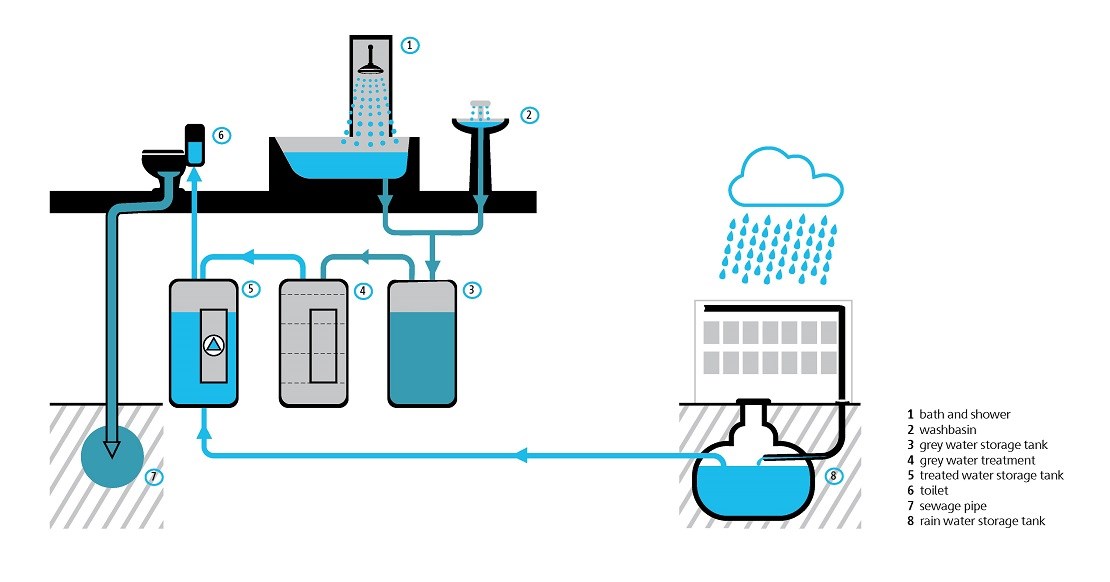 This system to re-use water from bathroom sinks and showers is designed to be simple and durable.

Such a reuse of water was a concept new to multi-unit residential buildings in the Czech Republic, and a few years later it's still not common across the world. Yet it offers significant potential for conserving drinking water, as toilet flushing is the second biggest use of drinking water in homes, after bathing and personal hygiene activities. Implementing this water recycling solution in Botanica K would save nearly as much water annually as required to fill one Olympic-sized swimming pool. Residents would gain from the added benefit of lower water bills, while helping reduce the need for energy-intensive municipal water treatments.

"It's better to try things than to spend a long time talking about them," says Petr, who has been with Skanska for his entire 30-year career. "It's best to have an example."

But how to make this concept a reality? One part of the solution was technical. For Botanica K, this would involve a series of tanks and pumps in the basement of each building. Critical to the system's success is being able to handle peak demands in the morning and evening, when people are getting ready for their day and then coming home. To ensure enough water, a backup system was installed to collect rainwater from the roofs to supplement the grey water system as needed.

Perhaps more challenging was overcoming regulatory hurdles. As in many nations, Czech building codes are based on the common practice of using drinking water to flush toilets, owing to the simpler plumbing systems required and the often low price of water. Petr started an extensive conversation with officials from the local municipality, explaining how grey water can be a hygienic solution too. Eventually, our water recycling system was approved, with the requirement that we submit data on the "grey water" to the municipality every month for a year. 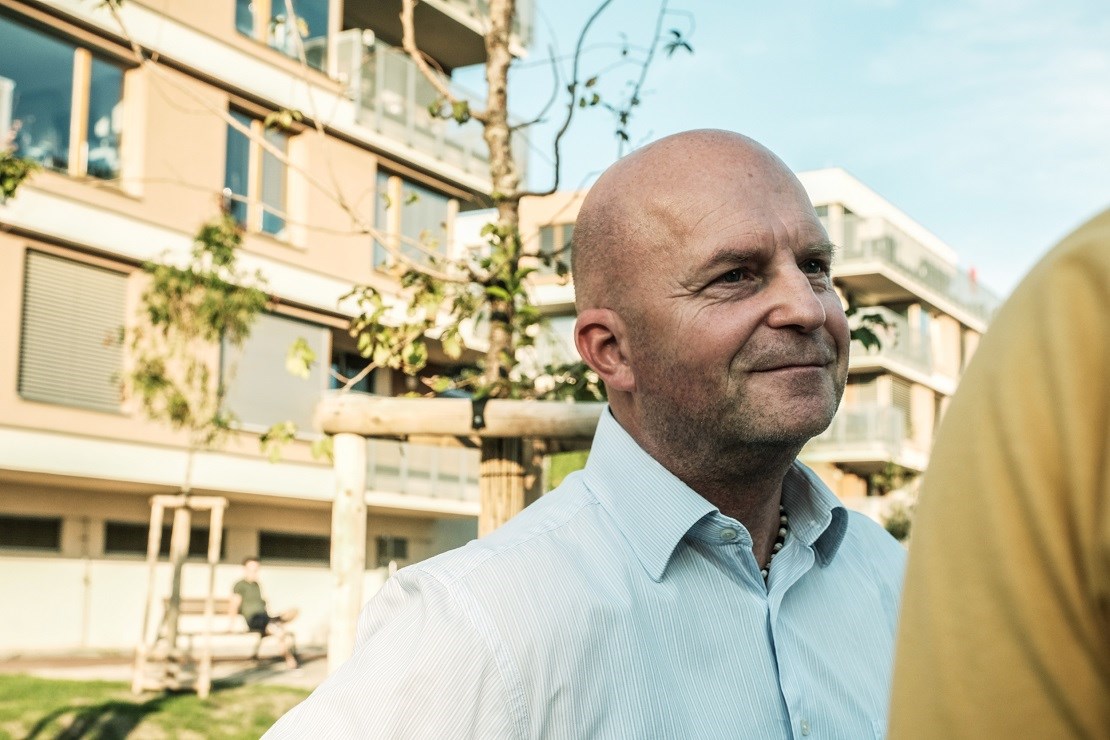 “You can compare this to your car – you have to use it in the proper way,” Skanska’s Petr Dušta says of the water recycling system he created. “If you have a car designed for the city and you drive it off road, it’s not going to perform well and it could get damaged.”

And then there was the educational aspect. For the system to work properly, residents need to follow a few recommendations. For example, they can use whatever shampoos, soaps and toothpastes that they want, but it's best to replace some common household cleaners with water biodegradable alternatives. And if someone dyes their hair in the bathroom sink, the water in the toilet might eventually take on a similar hue. We produced a special instruction manual for Botanica K that covers this and all green aspects of the buildings.

"You can compare this to your car – you have to use it in the proper way," Petr says. "If you have a car designed for the city and you drive it off road, it's not going to perform well and it could get damaged. We tried to make this grey water system as simple and as durable as possible to avoid those type of situations."

Turning on the system

We turned on the grey water system at the beginning of 2018, after enough residents had moved in to support the system's stable operation. We've been fine tuning the grey water system ever since, working in partnership with the University of Chemistry and Technology. The result is water flowing into toilet tanks that is clear, odorless and nearly as clean as drinking water – you would never know the difference.

This past summer we assessed the system’s environmental and financial impacts. Over the system's first six months, about 550 cubic meters of drinking water was conserved, producing a savings of CZK 50,000 (about SEK 20,100) on residents' water bills. Now later in the year, even more drinking water is being reused, about 25 percent on an average daily basis. We expect the system will pay for itself in 15 years, considering current energy and water costs.

“From a user perspective… it does not limit us in any way,” one resident says about the water recycling system. “We also like the savings and the partial independence of the building.”

Together with other water saving features – namely water sipping faucets and showerheads, as well as collecting and reusing rainwater for irrigation – about 40 percent of the drinking water consumed daily in households is being conserved. This savings is important to Botanica K’s targeted achievement of the second-highest level in the international BREEAM green building certification. It would be the first residential building in the Czech Republic to carry the BREEAM label.

As part of this assessment we surveyed residents. Eighty-six percent of respondents say their experiences with the toilet flushing system are satisfactory to very positive. Ninety-six percent perceive the use of grey water in their home as a positive.

"From a user perspective, we don't actually observe anything in our daily life, meaning that it does not limit us in any way," says one resident. "We are happy that the water is not colored. We also like the savings and the partial independence of the building."

Skanska plans to incorporate grey water recycling in other residential buildings that we develop in the Czech Republic, and we are increasingly using grey water and rain water to flush toilets in commercial office buildings in Central Europe and the US. We've even created one US building that transforms rain water into drinking water, and that features composting toilets that use no water at all.

"We’re helping to change the market to help the Earth," says Petr.