In December 1997, King Carl XVI Gustaf inaugurated Sweden’s High Coast Bridge – an early holiday gift to his country. This magnificent span provides a safer and more direct alignment of the E4 highway, and it remains one of the world’s longest suspension bridges.

Sweden’s High Coast is rugged, highly scenic terrain marked by distinctly red granite cliffs. A mecca for hikers and nature lovers, the area is so exceptional that UNESCO has designated it a World Heritage site.

Dramatically and gracefully crossing through this landscape is the High Coast Bridge, which carries the E4 highway over the Ångermanälven River. The bridge enables a shorter journey of 8 kilometers for motorists and 38 kilometers for heavy vehicles, the latter of particular importance with so much industry along Sweden’s northeastern coast. To compensate for intruding into nature, the High Coast Bridge was designed with a significant focus on aesthetics. It was once voted one of Sweden’s most beautiful “buildings” and has become another reason to visit the High Coast.

Before some 20,000 people walked across the bridge on its opening day, the King of Sweden said: “Bridges are not only technical and architectural masterpieces. Bridge construction also symbolizes how people are more closely connected. This is especially important in parts of our country where people live far apart.”

Skanska spent four years building much of the structure. Our work includes the casting the 180-meter-tall pylons, which at the time were the tallest structures in Sweden. We were also part of the consortium that assembled the suspension system and superstructure over the Ångermanälven river. Ensuring people’s safety and protecting the environment were essential in everything we did. 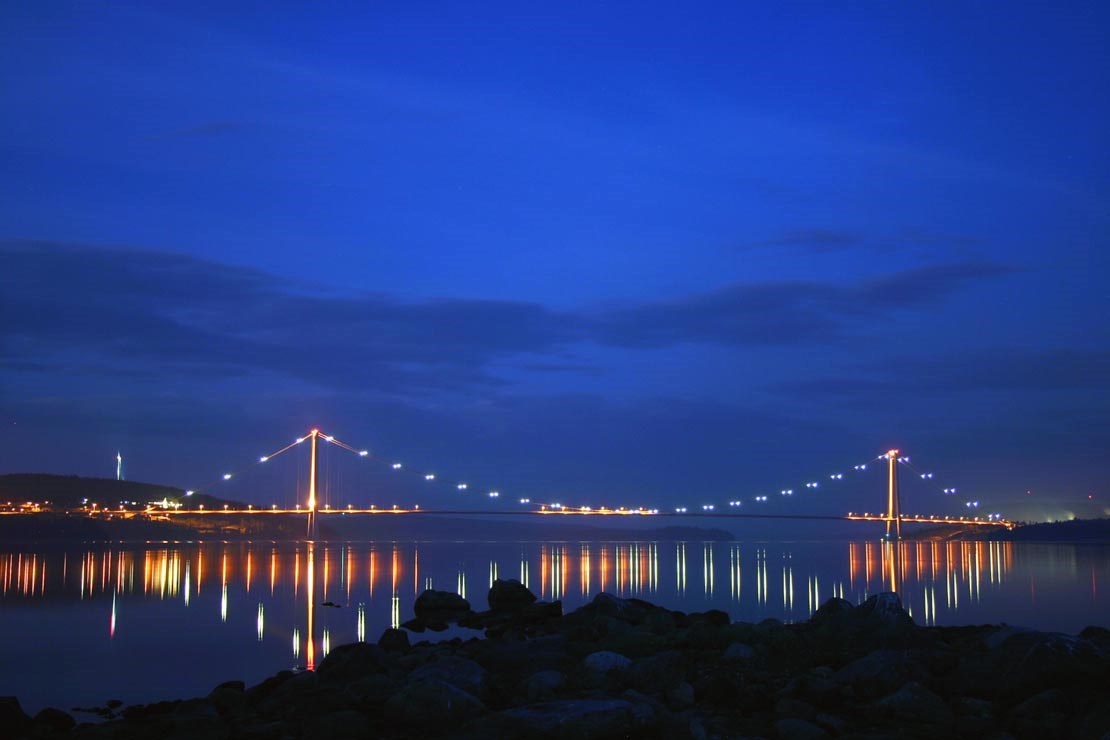 The bridge’s great length and location in the cold north of Sweden necessitated innovation during design and construction.

Innovating through the cold

The bridge’s great length – 1,210 meters between the towers – and location in the cold north of Sweden necessitated innovation during design and construction.

For example, the cumulative effect of just a few inches of snow falling and being plowed into the bridge’s railings would – together with the wind – affect the stability of the slender span. Engineers did much testing in a wind tunnel and on a nearby bridge to create a highly stable structure.

Also, to help accelerate construction to minimize work during the harsh winters, our consortium constructed the road deck not piece by piece but by assembling giant modules. These 48 steel sections, each 40 meters long and 21 meters wide, were manufactured in Finland and then barged to the project site, where an enormous floating crane lifted them into place. Side span sections near the shore were slid into position via an intricate platform. Complex geometric calculations were essential to this phase of work.

As our consortium assembled the deck, we also began erecting the two main suspension cables, each comprised of 11,300 wires. These cables bound the bridge together, for the first time providing a fixed connection between both shores at this location.

Not everyone initially thought it was technically possible to build the High Coast Bridge. But it proudly stands today, connecting people and places in all seasons.

We hope that since the inauguration, the King has returned to appreciate all that this bridge means to Sweden.