In a changing Arctic, adapting buildings and ways of life

At the top of the world, Svalbard is warming and increasingly wetter. Becoming more resilient to this changing climate means adjusting how, and where, to build.

Halfway between the top of Norway and the North Pole, well within the Arctic Circle, lies Svalbard, a glacier-covered archipelago. Home to the world’s northernmost settlement, this is a place where polar bears roam, and where during the winter the sun is replaced by the dancing Northern Lights.

This barren, isolated land might seem timeless, yet it is transforming in ways large and small from rising temperatures and increasing precipitation. The Arctic is warming faster than any other region on Earth. People, and nature, are trying to cope.

Svalbard’s fjords no longer freeze over during the winter, the glaciers are thinning and the permafrost is thawing. Birds, fish and even whales that once found Svalbard too cold are now moving in, while some highly specialized arctic species are struggling. Also, the risk of avalanches is increasing, sometimes with severe consequences: a 2015 avalanche killed two people and destroyed 11 homes in Svalbard’s main town of Longyearbyen, while a 2017 avalanche destroyed six homes.

“Everything is changing,” says Kim Holmén, a Svalbard resident and International Director with the Norwegian Polar Institute. “Wherever I look, there are clear, visible differences.”

As to what is behind all this, the only reasonable and compelling explanation is increased greenhouse gases, he says.

Becoming more resilient to this changing climate means adjusting how, and where, to build. Longyearbyen is located in a mountain valley, and about 10 percent of its population of approximately 2,000 is regularly forced to evacuate because of increased threat of avalanches. The government has made it a priority to demolish homes in high-risk areas and replace them in safer zones. It estimates some 250 homes will need to be torn down.

Already underway is the first major home relocation project, creating 60 new apartments for those who lost homes in the recent avalanches and for employees of the local university and hospital. Statsbygg, the Norwegian government agency responsible for construction and properties, is behind this NOK 220 million project (about SEK 237 million), with Skanska as a key partner. 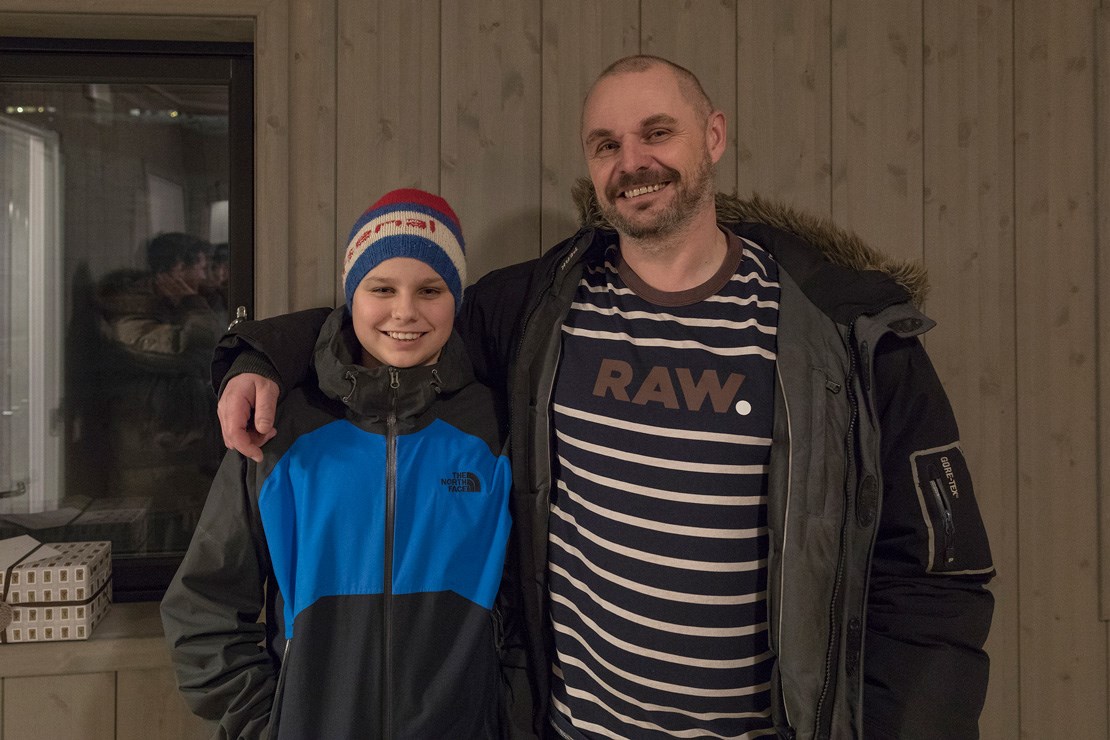 “It is very good to get a permanent home again, a house that is safe,” says Nils Lorentsen, with son Niklas. Their previous home on Svalbard was damaged by a 2017 avalanche.

To safely and efficiently speed construction in Svalbard’s challenging conditions, the houses are assembled out of truck-sized modules that we manufacture on mainland Norway. They leave our factory nearly complete inside and out – with kitchen cabinets, windows and bathrooms already installed – ready to be shipped by sea to Longyearbyen. The first modules arrived in early September and were lifted into position. They create some of the Arctic’s most environmentally responsible buildings, which are to last 60 years in the harsh climate.

People began moving into the initial 30 apartments just before Christmas, excited to celebrate the holiday in their new homes.

“It is very good to get a permanent home again, a house that is safe,” says Nils Lorentsen, whose previous home was damaged by the 2017 avalanche. “We are all very happy about that.”

These homes are different from others on Svalbard. Buildings have traditionally sat on wood piles anchored in the permafrost. But with the ground temperature increasing, it’s more likely that the wood will rot and become unstable. So the new homes are mounted on steel pilings driven 10 to 15 meters through the permafrost to the bedrock beneath. Sensors keep close track of the ground’s temperature and moisture.

Another adjustment is that the buildings are lifted higher above the ground than normal on Svalbard. This is to further separate the warmth of the living areas from the permafrost, with the bonus of providing convenient, sheltered areas for parking. 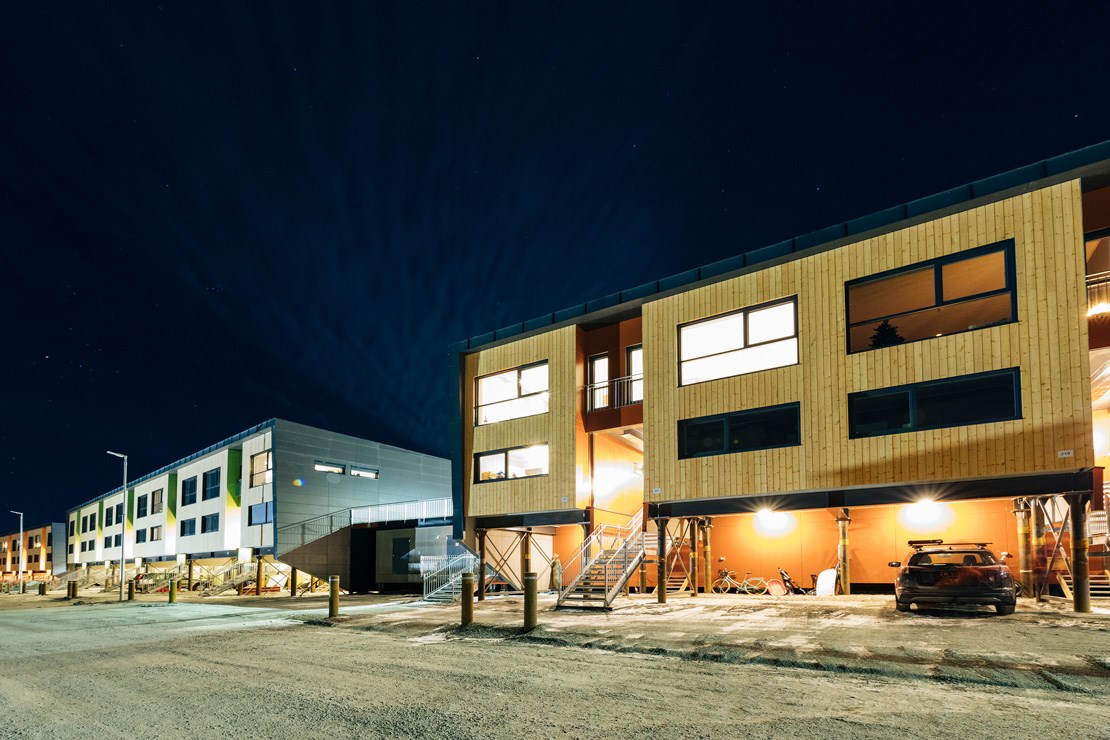 These new homes are different from others on Svalbard, with steel foundations and being raised higher than normal above the permafrost. The added height conveniently provides covered parking.

Even the Svalbard Global Seed Vault has been affected by warming. A safe deposit box for millions of crop varieties in case of global crises, the vault was located within a mountain outside Longyearbyen to take advantage of the natural freezing. However, following construction the permafrost did not fully re-establish itself, enabling water to over time leak into the entrance tunnel.

This spring, Statsbygg is completing a project to waterproof that tunnel and add drainage ditches to carry away meltwater. The need for these features was never anticipated when the vault was designed and built more than 10 years ago. 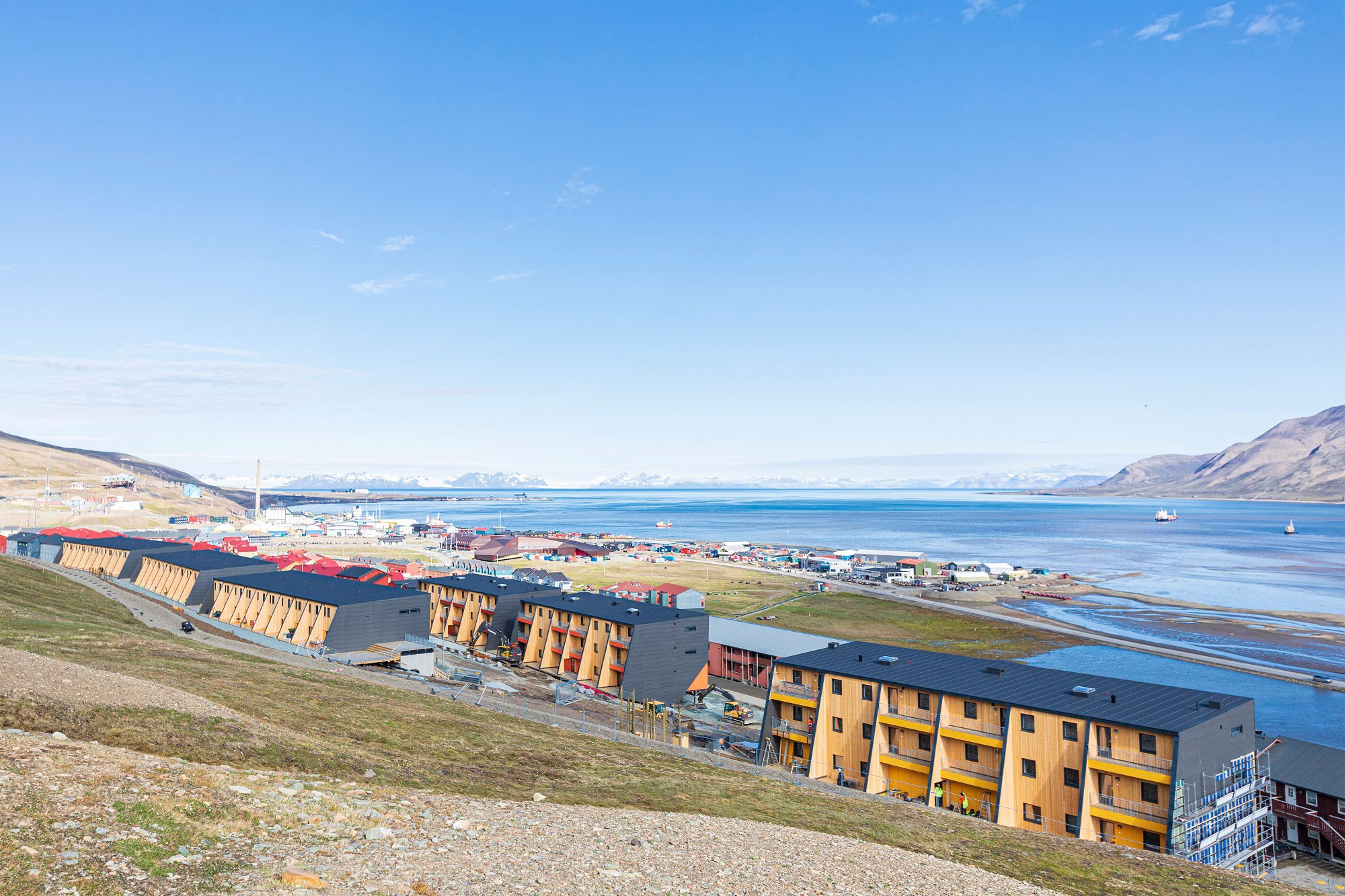 Looking ahead into future, scientists expect Svalbard to be even warmer and wetter in climate.

“There is no alternative”

Looking ahead, scientists expect Svalbard to be even warmer and wetter. By 2100, Longyearbyen’s annual average temperature may increase from minus 5.9 degrees Celsius (21 degrees Fahrenheit) to 3.3 degrees Celsius (38 degrees Fahrenheit), with 40 percent more precipitation and much less snow, according to the Norwegian Meteorological Institute. Svalbard will be a different place.

As to whether he is hopeful regarding the future, Holmén replies: “I’m an optimist because there is no alternative.”

Skanska is one of the leading construction and project development companies in Norway.