Deep Green Cooling makes it easy to be cool, comfy and climate smart while saving on energy bills.

Cooling an office building with one-tenth of the electricity of traditional methods? Yes, it's rock science! And it's simple, if you have a building in a region with cold winters, the ability to drill deep into the Earth and the will to rethink what you know about cooling.

The solution lies deep in the bedrock – further than most geothermal systems go – where the temperature is always around 10 to 15 degrees Celsius. Transferring that cool into buildings without using much energy is at the heart of Skanska's Deep Green Cooling system.

Still, it delivers a pleasant indoor climate of 22 to 24 degrees Celsius – even on hot summer days. In fact, it is even better on warmer days, as the robust system with few moving parts does not risk going down from overheating, and does not cause condensation like traditional systems. 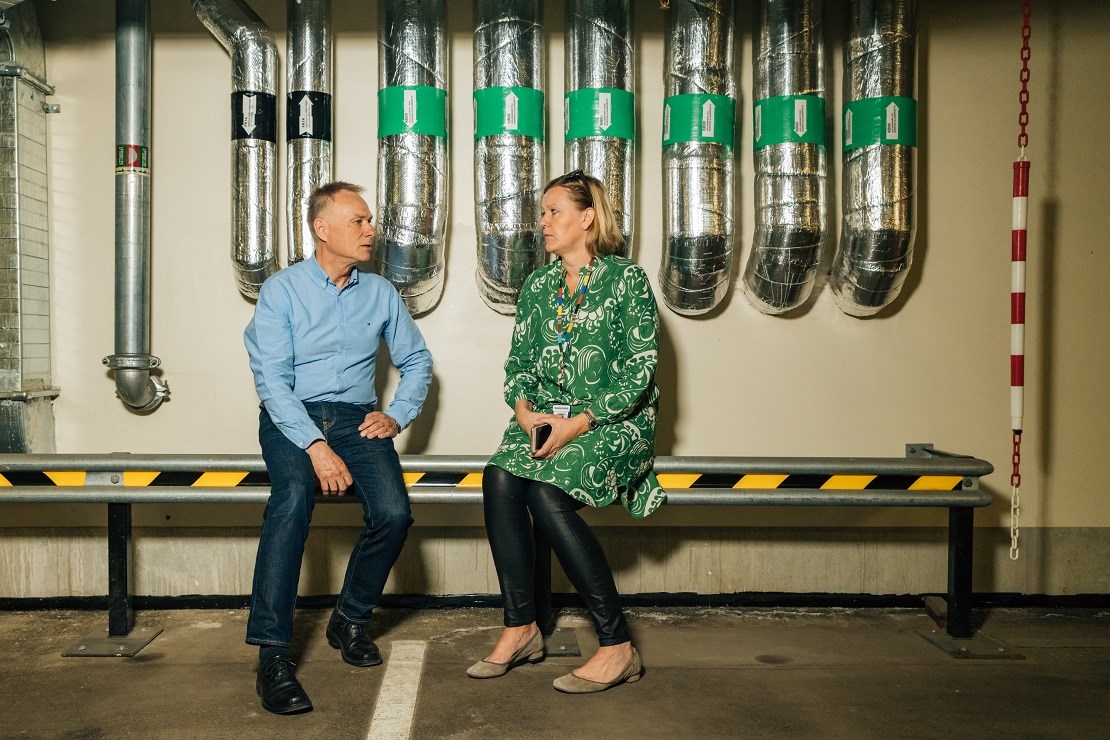 Here's what Deep Green Cooling involves. Step one is to capture the chill. For a typical multistory office building, we drill 40 holes that are about 12 centimeters (5 inches) wide and about 250 meters (820 feet) into the bedrock. Roughly, one well is needed for every 300 to 500 square meters of office space, depending on cooling needs and geological conditions.

Step two is using a heat exchanger to transfer the ground chill – carried by water, not refrigerants – to the systems that will further distribute it within the building. This water is piped through radiator-like "chilled beams" that directly cool rooms, and it is also used to lower the temperature of outdoor air being drawn into the building for ventilation. 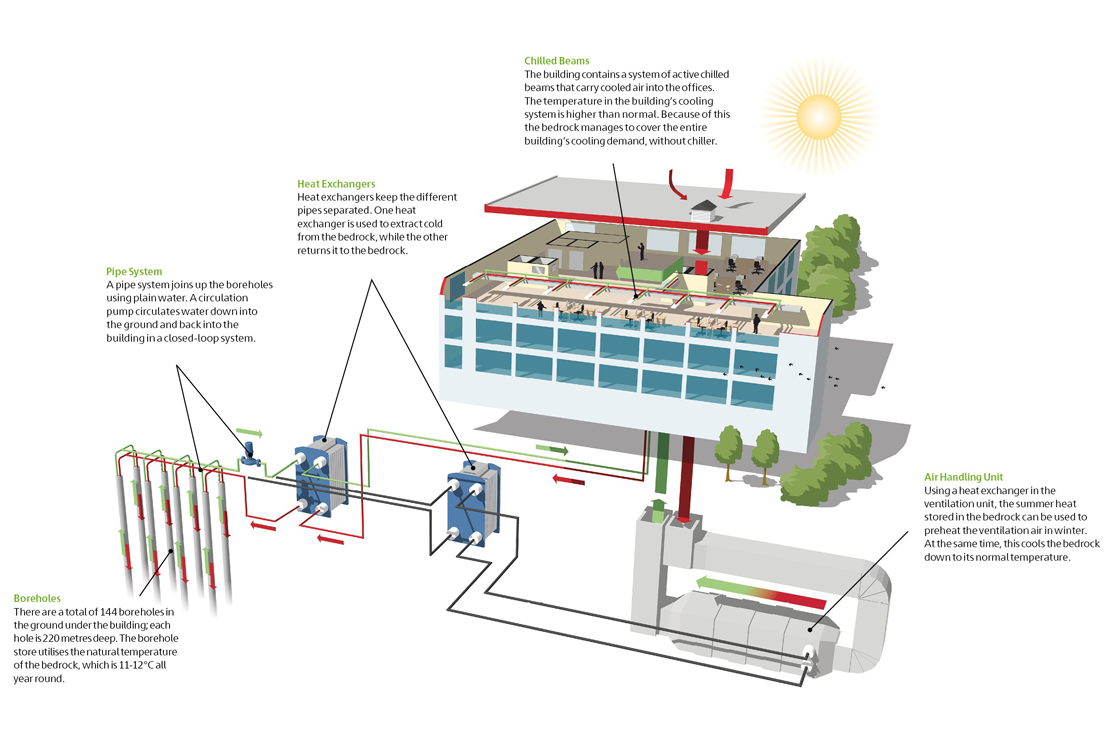 The illustration shows how Deep Green Cooling is used at our headquarters, Entré Lindhagen, in Stockholm.

The magic of Deep Green Cooling is that every step saves energy. Through its straightforward but highly effective cooling process, Deep Green Cooling works without such energy gulping equipment as compressors, evaporators and condensers commonly found in other cooling systems. This ensures low and predictable costs for energy and future service needs, while minimizing environmental impacts.

Also, it provides benefits in all seasons. Instead of just being released outside, summertime surplus heat is piped back into the bedrock, which captures the heat. When cold weather arrives a few months later, the system operates with the reverse effect of summertime: it now warms the building.

With so many advantages, the only downside is a higher initial investment. But the payback is realized during building operations.

Find it in Sweden, Norway and Poland

Deep Green Cooling works best in regions with cold winters. An average ground temperature under circa 15 Celsius is enough to deliver cooling even during summer.

"Deep Green Cooling is a bonus"

Our Klipporna development in Malmö is one of the offices benefiting from Deep Green Cooling. The property, which achieved the top LEED Platinum green certification, was acquired by Ikano Bostad. The firm's Real Estate Director, Olle Ingman, is happy with the asset.

"It's a very good building that offers a modern, efficient and healthy work environment," says Olle. "Energy performance, of course, is equally important to us. Deep Green Cooling is a bonus that adds value to the asset while reducing costs for energy and operation."

Deep Green Cooling is an important way we can improve the energy efficiency of our commercial developments. Learn more about some of these smartly cooled office buildings.