There are few immersed-tube tunnels in the world, and Wade Watson is at the helm of constructing one of them as part of Virginia’s Elizabeth River Tunnels public-private partnership (PPP). Overcoming this project’s technical challenges has been an incredible feat, but Wade is most proud of the way this project is investing in the two cities it connects.

"We're really known in the community as running a very efficient project and a very socially conscious project,” says Wade, the director of the Skanska-led design-build joint venture. “Our people like working for a company that really serves those around us."

Leveraging this mega project to invest in the local cities of Norfolk and Portsmouth has taken many forms, including:

"We have to be good neighbors, we have to know what the community thinks, and we have to do our work, day in and day out, in a conscious way that minimizes the short-term impacts of the construction activity as we communicate the long-term benefits of the project," Wade says.

Being a good neighbor

The importance of being a good neighbor is a lesson Wade learned throughout his 37-year Skanska career. For instance, when he was directing construction of the iconic Ravenel Bridge in Charleston, South Carolina, his team took extra steps to ensure that this span reflected the community. For instance, they held meetings to let community members have a say on bridge girder colors, handrail styles and concrete finishes – all key aspects of the bridge's appearance.

"When you provide a community with the opportunity to take part in a project, they take ownership of it," Wade says.

"No doubt about it, people love it," he says. 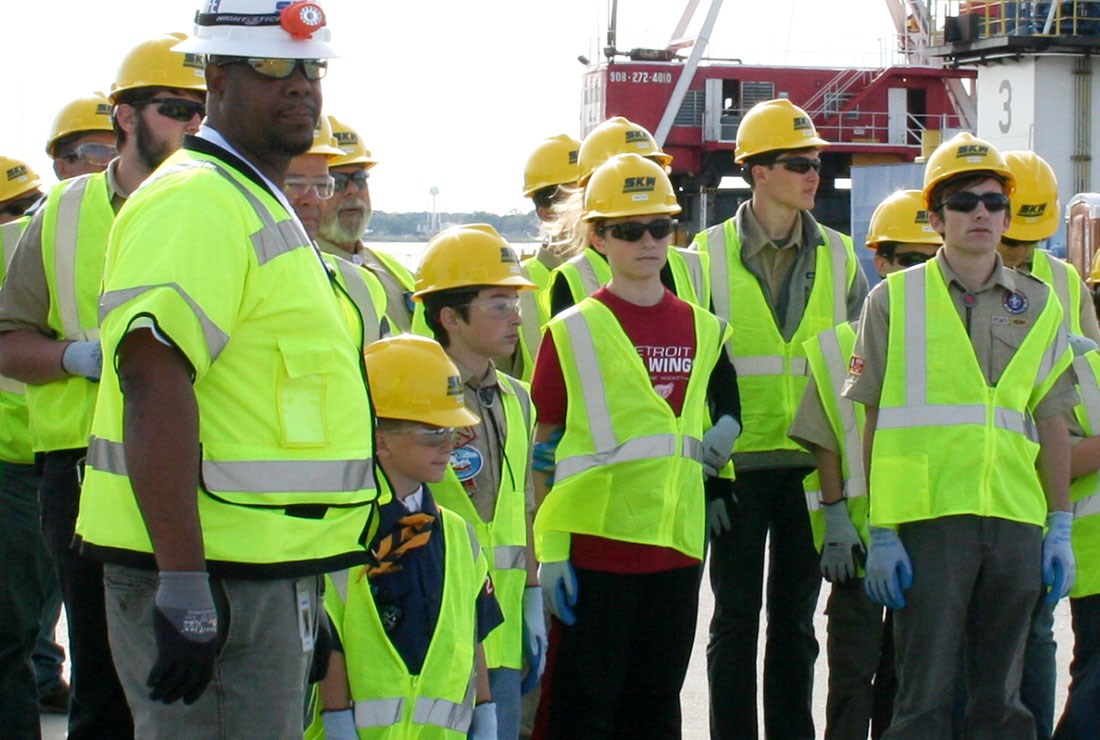 The Scouting the Midtown Tunnel event brought more than 100 local Cub and Boy Scouts to the tunnel to introduce them to civil engineering and construction management, and to help them earn their engineering merit badge. "We have to be good neighbors," Wade says.

Along with building communities, Wade also uses projects to enhance the capabilities and careers of project team members. Key to that is rotating people to different project roles so they gain new knowledge and perspectives.

"There is a little pain in making those changes because of the learning curves, but I’d rather change people on the same project than lose them to another company," Wade says.

Wade brings to his teams a deep sense of integrity and fairness, along with significant business and technical smarts. Those around him become loyal to him, and see him as a role model.

"Wade is highly respected both inside and outside the company," says Skanska Vice President Tom Fulton. 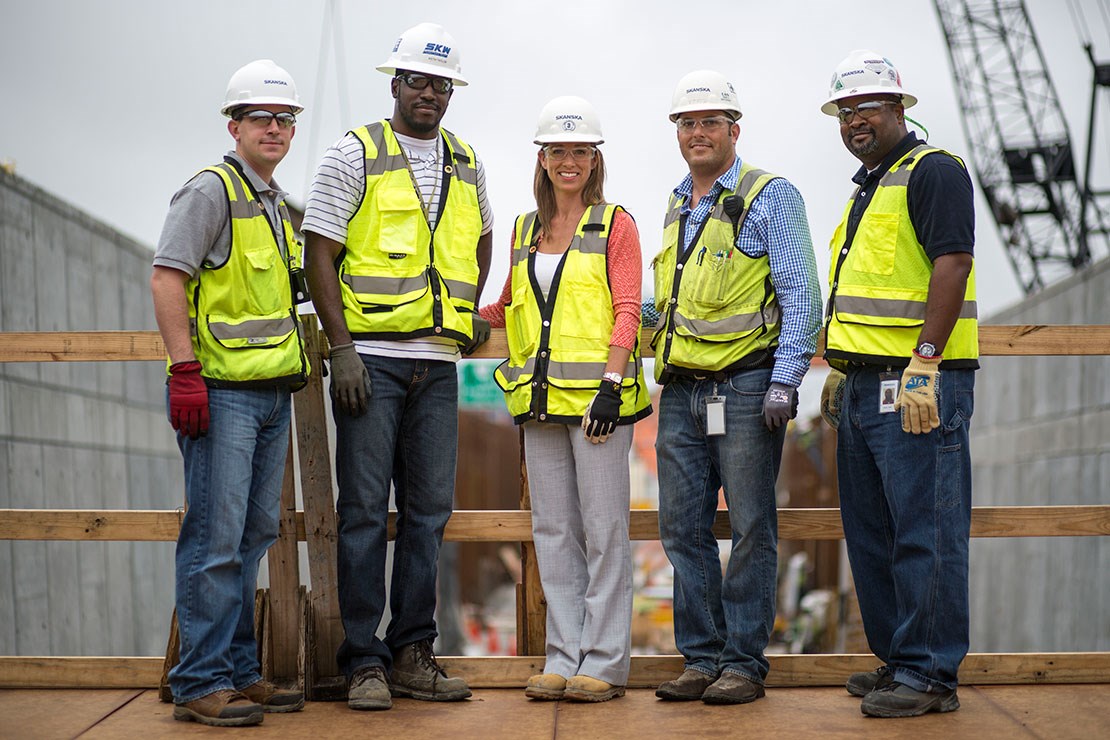 Wade leverages projects to enhance the capabilities and careers of team members, like these Elizabeth River Tunnels colleagues.

Having plentiful opportunities to solve new challenges is why Wade has stayed with Skanska for his entire career. Part of that is because Skanska undertakes large and complex projects that few other companies can handle – such as PPPs in which Skanska’s responsibilities span design, construction, financing, operation and maintenance.

"I've never had a slow day in my 37 years, and I like that," he says. "I believe that when you're really challenged you grow a lot quicker, and I think that’s gotten me to where I am today."

He adds: "Skanska allows you to move up and take on the responsibility that you're willing and capable of taking on at any point in your career. That’s what has kept me here all my life."

"For people who are invigorated by working hard, taking on new challenges and moving up based on their merits, the sky is the limit at Skanska." 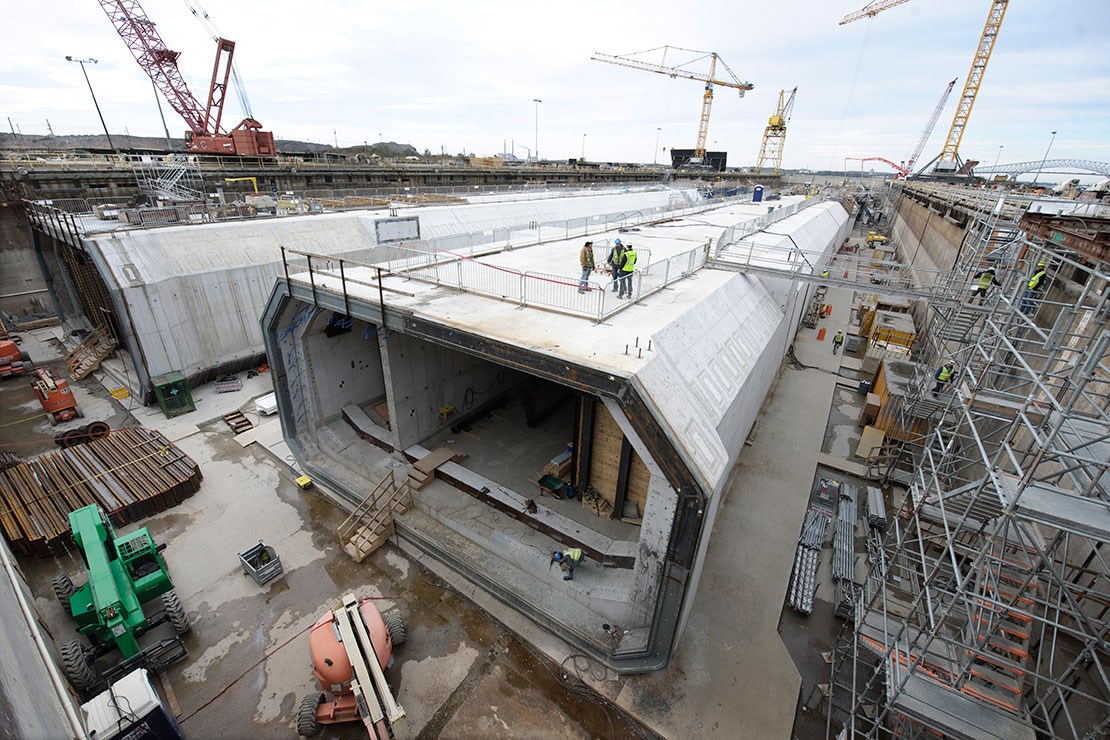 The project’s centerpiece involved assembling an underwater vehicle tunnel made of 11 16,000 ton (14.5 million kg) hollow concrete segments – this was a highly complex effort with many technical challenges.

Learn more about CCI, which is part of how Skanska defines sustainability.

Meet other people working for Skanska in different roles and locations.