Recognized for environmental and community approaches in UK and Sweden

A Skanska rail bridge project in London and a tramway upgrade in Stockholm were recognized as the "best of the best" under CEEQUAL, the international system that rates the environmental and social performance of infrastructure projects. The inclusive and value-based approaches jointly provided by Skanska, our customers and our partners support building for a better society.

The Borough Viaduct project involved building a 322-meter-long bridge to increase trains into London Bridge station in London, improving the traveling experience for many people.

Held every three years, the CEEQUAL Outstanding Achievement Awards recognizes best-in-class performance in any of the environmental and social areas evaluated by the CEEQUAL system.

In London, the Borough Viaduct project received honors in two categories: Effects on Neighbors and Historic Environment. In Stockholm, the Spårväg City Line 7 Accessibility Upgrade Part 1 was "highly commended" in the Project Management category. Both of these projects had previously achieved another major accomplishment: earning CEEQUAL's top rating of "excellent."

Building over a major tourist destination

The Borough Viaduct project involved building a 322-meter-long bridge to double the capacity of one of London's busiest rail lines. This enabled the increased flow of trains into London Bridge station, improving the traveling experience for many people. The judging panel noted the complexity of this project with its congested, high-profile site: the new viaduct passes over the Borough Market, a major tourist destination and landmark that operates nearly 24 hours a day. (It can be seen in such films as Bridget Jones's Diary and the Harry Potter films.) The panel noted the effectiveness of the team's plan to engage the community, mitigate disruption and enhance the site for the long term.

A Victorian-era roof and Roman ruins

The project included replacing the Borough Market's cast iron roof, which was in poor shape. The team carefully dismantled the existing roof structure, refurbished cast iron components that could be reused, and then rebuilt it, taking great care to retain historic features while ensuring that it met modern standards. Another historic preservation aspect to the project was the discovery of Roman ruins. To preserve the ruins on site, the team redesigned the foundations being constructed. 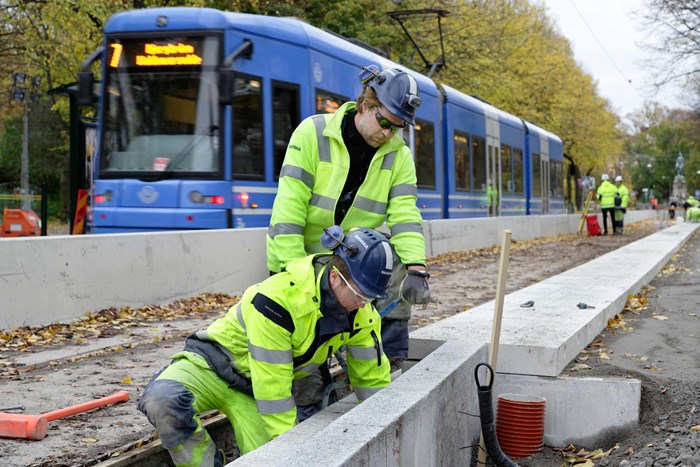 Close collaboration between Skanska and our customer were essential to success with the Spårväg City Line 7 tramway project in Stockholm.

For the Spårväg City Line 7 tramway project in Stockholm, close collaboration between Skanska and our customer were essential to this project's success. Together, the joint team focused on collectively achieving Sustainability targets, including with Green and Safety. An example of the innovative thinking that resulted was collecting rainwater for dust control, instead of using drinking water. Also, Skanska built temporary tracks to maintain tram service during construction, avoiding the cost and additional emissions that would have resulted if replacement bus services were needed.

As this project's goal was to ensure that all passengers – including those with disabilities – have full access to busses and trams, disability organizations were engaged to provide feedback.

CEEQUAL has published case studies on both of these projects on its website: read more on the Borough Viaduct and the Spårväg City Line 7 tramway.

Skanska focuses on the sustainability areas in which we can make the most significant positive contributions.