Ride – or run – through this tunnel six months early

The new Midtown Tunnel in Virginia, U.S., recently opened to traffic six months ahead of schedule, thanks to superb design-build delivery on a project made possible by a public-private partnership (PPP). Explore how we created this tunnel – the first of its type in the U.S. – to solve a key need of the local society.

How we delivered the 3,800-foot-long (1,158 meters) Midtown Tunnel so early is a story of collaboratively working to overcome great technical challenges, while also supporting Skanska’s values and sustainability priorities – including ensuring safety and investing in local communities.

At a maximum depth of 95 feet (29 meters) below the Elizabeth River, the new Midtown Tunnel carries two lanes of traffic from the city of Norfolk to Portsmouth. It is the centerpiece of the Elizabeth River Tunnels PPP, a group of related road and tunnel projects that will have as its legacy reduced commuting times, and travels that are safer and more reliable. The project's benefits also include developing the capabilities of many small, local businesses, training 86 people for new careers in construction, and environmental clean-up work that resulted in a healthier riverbed.

Here's how this tunnel came to be.

Some tunnels are made of steel. Others are made of concrete. Some are bored below the surface. Others are lowered into place from above. What would be the right choice for the new Midtown Tunnel?

This decision involved much analysis: We needed the most cost-efficient solution that would last the required 120 years. This means being able to withstand the weight of a sunken aircraft carrier, should an incident happen with the world's largest naval base nearby. It also means withstanding a sea level rise of up to two feet (0.6 meters).

Ultimately, an immersed tube design was selected. With this, 11 hollow tunnel segments – each about 350 feet long (107 meters) – would be cast off site, floated to above their final position, and then lowered via a special barge to that final position on the river bottom. The tunnel would be made entirely of reinforced concrete, rather than a steel structure encased in concrete: this is a very efficient design made possible due to advances in concrete technology.

The PPP model was key to developing the optimal solution as it enabled close collaboration between our consortium’s developers, designers and builders, and those on our team who are operating and maintaining this infrastructure until 2074. (Skanska is an equal equity investor and the lead of the design-build joint venture.) This group focused on creating a tunnel that was the right solution not only when it opened, but through its entire life. 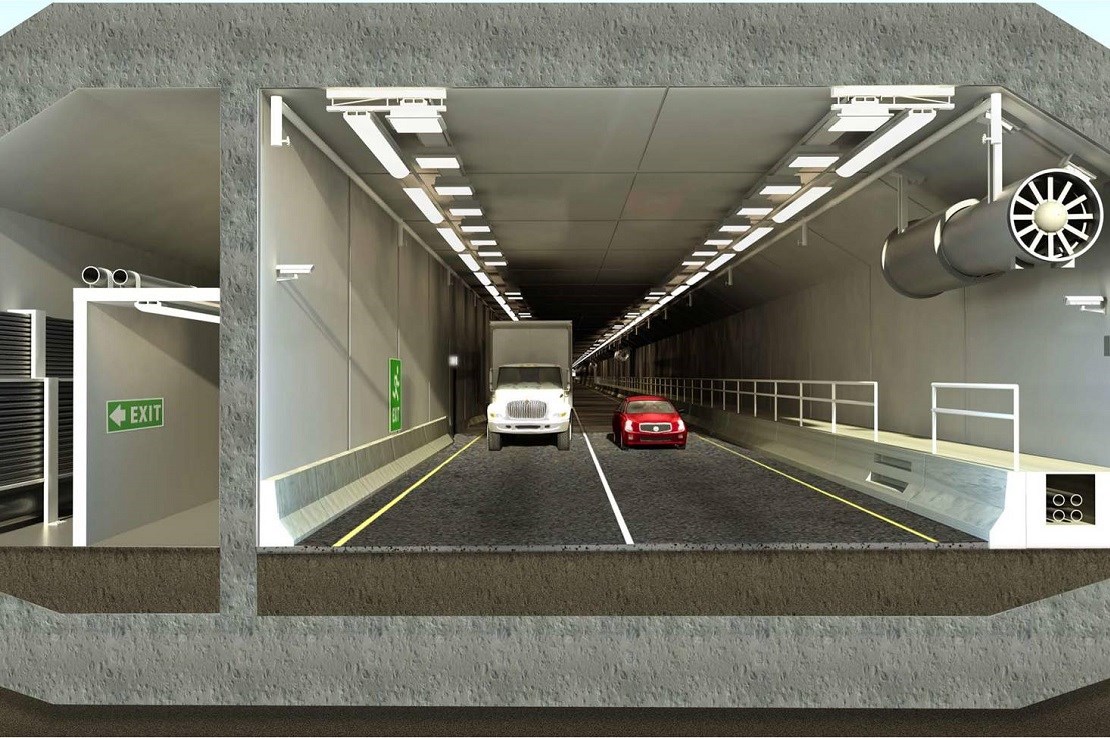 A profile view of the new Midtown Tunnel, with the innovative emergency egress corridor on the left. This is the first deepwater all-reinforced concrete tunnel in the U.S.

The best available place to make those 11 tunnel segments was 220 miles (354 km) up the Chesapeake Bay in Baltimore. There, we would have access to a large graving dock, a basin originally used for shipbuilding. Deep water connects Baltimore with the project site.

We cast these behemoths in two "litters," or groups of elements. This involved setting up formwork the height of a three-story building to support the concrete, and then pouring concrete supplied by two on-site batching plants. To avoid joints, which could leak, we poured the concrete in long continuous pours lasting up to about 10 hours. That required much precise planning and execution.

Concrete creates heat as it cures (hardens), and with this much concrete – up to four feet thick – the heat could damage the structure. So on warm days we injected the concrete with shots of supercool liquid nitrogen.

We tested 120 concrete mixes before we found the recipe best suited for this tunnel.

Floating to within 1 inch of calculations

It took more than a year to plan and construct the first six elements (seven feet of snow that winter did not help the schedule). Then, the units needed to reach the project site 220 miles away. This required transforming these 14,000-ton (12.7 million kg) tunnel segments into structures that would float. Temporary steel and concrete bulkheads were installed on the ends of the elements to keep out water, and ballast tanks were constructed inside to stabilize the units.

But the work most critical to enabling the elements to float correctly had already been done: carefully monitoring each segment's weight during construction. Adding to that complexity was that each element had a slightly different shape and weight because of the tunnel's curvature.

"Things weren't tracked down to the level of individual nuts and bolts, but it was close to that," says Project Engineer Eric Carter.

Then one day in the early morning darkness, a valve was opened to let water begin flooding the graving dock. Would these first units float as expected? They did! They floated to within 1 inch (2.5 cm) of calculations, a tremendous achievement.

Once the elements were floating, they could begin their trips. One by one, tugboats eased those giants out of the graving dock. "It was strange seeing how easily the elements slipped out of there," says Jackie Naumann, project controls manager. "But, of course, that was the plan. The project team planned float-out down to the minute, and that hard work resulted in a successful activity."

Each element's trip down the Chesapeake Bay – a major inland waterway – took about two days. All the way, the elements were under careful scrutiny. Sensor systems tracked such metrics as location and tilt – tilt being an indication of water pouring in – and the data was transmitted to a technician on land. The operator was able to remotely start on-board generators and pumps.

Thankfully, each element had a smooth passage to the Portsmouth project site.

Critical to the Midtown’s early opening was the time we invested in planning ahead of construction. This included having project leaders travel to major tunnels either under construction or recently completed around the world to speak with key stakeholders about what worked and what did not. Leveraging Skanska’s global knowledge base was a key part of that: Our Midtown Tunnel team made several trips to the Bjørvika Tunnel in Oslo, Norway – a concrete immersed tube tunnel that Skanska was building while Midtown planning was underway.

Here’s what it looked like to be in the tugboat pulling one of the tunnel elements 220 miles (354 km) from the casting site to the tunnel location.

Creating the tunnel sections was just one part of making the tunnel. While that work was ongoing, another team within our design-build joint venture was constructing the approach ramp structures through which vehicles would enter and exit the tunnel.

Yet another team was dredging a slot into the river bed to contain the tunnel elements. (About 1.2 million cubic yards of material – enough to fill about 85,000 dump trucks – was removed by barge, mostly for disposal in an approved ocean area.) And later, once the tunnel elements were in place on the river bottom, a final team would install the lights, roadway surface and other systems and finishes.

Healthy competition between those teams was important in shortening the new tunnel's schedule by six months. For every activity they did, they sought ways to do it better the next time.

Our teams building separate but interconnected parts of the new tunnel – such as this approach ramp – helped inspire each other to stay ahead of the schedule.

The elements needed to be buoyant to float to Portsmouth, but immersing them required counteracting that buoyancy. Getting them to "sink" was harder than getting them to float.

We submersed the elements by making them heavier, taking each from about 14,000 tons to about 16,000 tons. This was done by pumping in two feet of concrete to coat the inside floor, stacking a layer of four-foot-thick concrete blocks on top and adding 325,000 gallons of river water to the ballast tanks.

A special catamaran-like barge was used to lower the elements to the river bottom, a process that took about 12 hours for each. Once there, a hydraulic arm pulled the section together with an adjacent section to form a watertight seal. Later, some 743,000 tons of aggregate and soil were layered on top of the tunnel to lock it in place.

"The basics of tunnel immersion are fairly simple, but the details are terribly complicated," says Wade.

This animation shows the process of lowering a tunnel element to the river bottom. "The basics of tunnel immersion are fairly simple, but the details are terribly complicated," says Skanska Vice President Wade Watson. (The tunnel immersion process is also illustrated in this graphic.)

As each tunnel element was placed on the river bottom, crews began working inside the expanding structure. First, the bulkheads that enabled the elements to float were knocked down by a hydraulic excavator. Then the joints that connect one element to the next were locked together with concrete. Then came fireproofing on the walls, then electrical conduits, then fire sprinkler pipes and more.

Eventually, it was time to install what drivers now see as they pass through: the lights, other jet fans, message boards and an asphalt concrete driving surface.

"You’ll never know when you’re driving through the tunnel that it is made of separate elements," says Daniel Francis, project manager.

Fresh air is pumped through the large white tube on the right to enable work to safely progress inside the tunnel. Thorough planning and continuous improvements were key elements of project success.

The culmination of all this hard work and smart thinking paid off on June 17. That’s when the first lane of the new tunnel opened to the public – six months ahead of schedule! A white Honda Accord was the first vehicle to travel through.

On August 26 the final lane opened, and the following day the public had a chance to see the tunnel up close, as it was closed to traffic to allow a celebratory 5k run and walk. Some 410 people from the local community took part, running from one end of the tunnel to the other end, and back. As they made their way, the tunnel’s electronic message boards had some encouraging words for them, including "Nice run," "Well hello there" and "I love to run too."

Once past the finish line, runners were happy to share how the new tunnel would help their daily lives.

"This will make the drive back and forth through Portsmouth a lot nicer, and quicker," local resident Robert Hogge says of the new tunnel. "It will speed up our commute time to work."

Participants from the Midtown Tunnel 5k share thoughts on the new tunnel. A public-private partnership (PPP), the Elizabeth River Tunnels project – with the new Midtown Tunnel as its centerpiece – will save the average round-trip user about 30 minutes a day in commuting time.