(Solar) power to the people

BoKlok, the affordable housing concept owned by Skanska and Ikea, is the first residential developer in Sweden to commit to equipping all apartment buildings with photovoltaic solar panels.

Starting next year, many more people across Sweden won’t have to look far to see the worldwide boom in solar energy production – they’ll just have to look up.

Beginning in 2019, BoKlok, the stylish-yet-affordable housing concept owned by Skanska and Ikea, will equip all apartment buildings it builds in Sweden with photovoltaic solar panels on the roofs. That’s about 1,000 homes annually. BoKlok – Swedish for Live Smart – is the first residential developer in Sweden to make such a large-scale commitment to solar power, which will lower residents’ energy costs and reduce carbon emissions.

The electricity from the solar panels will drive the buildings’ ventilation, lighting and parts of the shared heating. Any surplus will be sent directly to the common power grid. As much as possible, the buildings will be oriented to maximize solar energy production.

This advancement combines the green focus held by both Skanska and Ikea with BoKlok’s founding mission from 21 years ago: “To provide better homes for the many people.” BoKlok homes are modern, cozy and set a high standard, while priced for people with regular wallets, thanks to standardized designs and industrialized production.

“We should make it easy for customers to live affordably and sustainably,” says Jonas Spangenberg, BoKlok CEO. 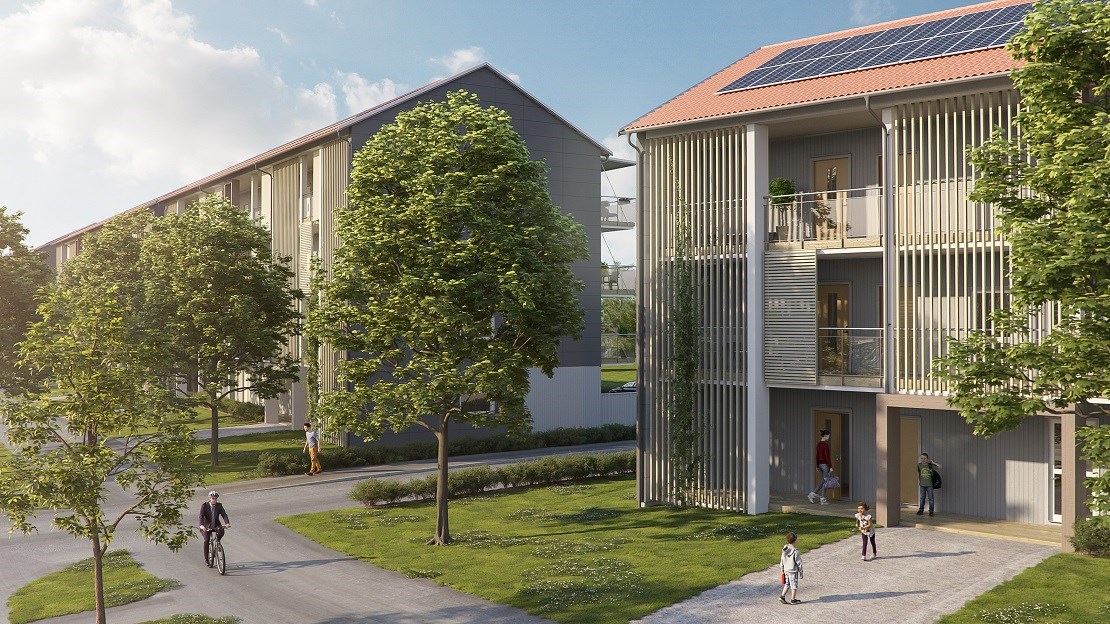 The combined knowledge of BoKlok and Ikea is enabling efficiencies that will make clean energy more affordable for more people. Adding solar panels to roofs will not increase residents’ costs.

Many homebuyers show a preference for environmentally responsible features, but price is often a more significant factor in the purchase process. Through a collaboration between BoKlok and Ikea, this solar system will not increase residents’ costs. Rather, the combined knowledge is enabling efficiencies that will make clean energy more affordable for more people.

Technological advancements and many countries’ tax incentives – often aligned with efforts to curb climate change – are also driving down the costs of solar power and fueling its expansion.

In 2016, new solar system capacity globally grew by 50 percent, rising faster than any other fuel, according to the International Energy Agency. And prices for solar power are increasingly comparable or lower than electricity from traditionally dominant gas and coal plants.

Based on such trends and wanting to do even more to drive sustainability, BoKlok has even grander green plans for its homes. Eventually, it wants homeowners to be able to fully pull the plug, and be self-sufficient with electricity.

Better homes for many people

Available in Sweden, Norway and Finland, BoKlok homes are modern, cozy and set a high standard, while priced for people with regular wallets.

Another first for solar energy

Skanska will be the first developer worldwide to cover office buildings with semi-transparent perovskite solar cells, which are integrated into facades.

We’re on a journey to Deep Green™, a future in which projects have near-zero environmental impacts.