Step inside one of the world’s greenest schools

An ambitious title, and not one that is lightly achieved. Heimdal High School, in Trondheim, Norway, is one of the world's greenest schools.

Just up until last year, students had been learning in a worn and outdated 41-year-old building. However, since August 2018 Heimdal High School students have a new academic home, a facility full of light, rich with common spaces for learning outside the classroom and fused with the latest technology. It was a welcome – and needed – change.

"Our fantastic new school signals to students that education is important, and that they are important," says Principal Elisabeth Tandstad. Skanska built this 1,100-student school and provided the engineering expertise required for it to stand out in another key way: It is one of the world's greenest schools, fulfilling a key customer ambition. 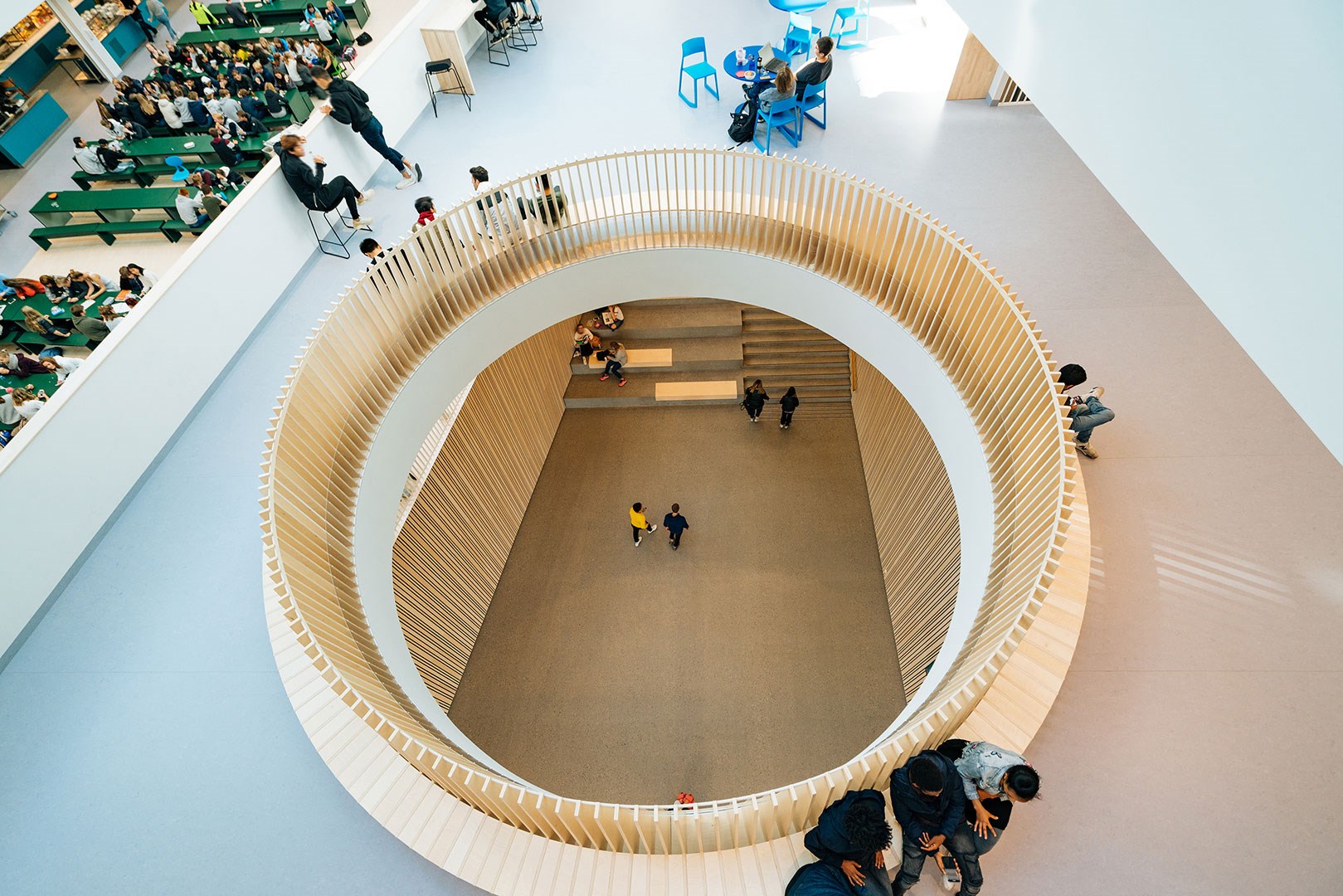 A facility for environmental learning: Students will collect data on the buildings energy consumption, this will be used in science classes.

To solve this great challenge, the school is designed to consume 75 percent less energy than a comparable building, with zero greenhouse gas emissions from its operation. Seventy-one percent of needed energy is produced on-site through a geothermal heat pump, solar cells and a biogas-fueled power station. Any excess heat is used to warm an adjacent swimming pool, and extra power is exported to the grid. Data from these energy sources will be used in science classes, making the school itself part of the lesson. 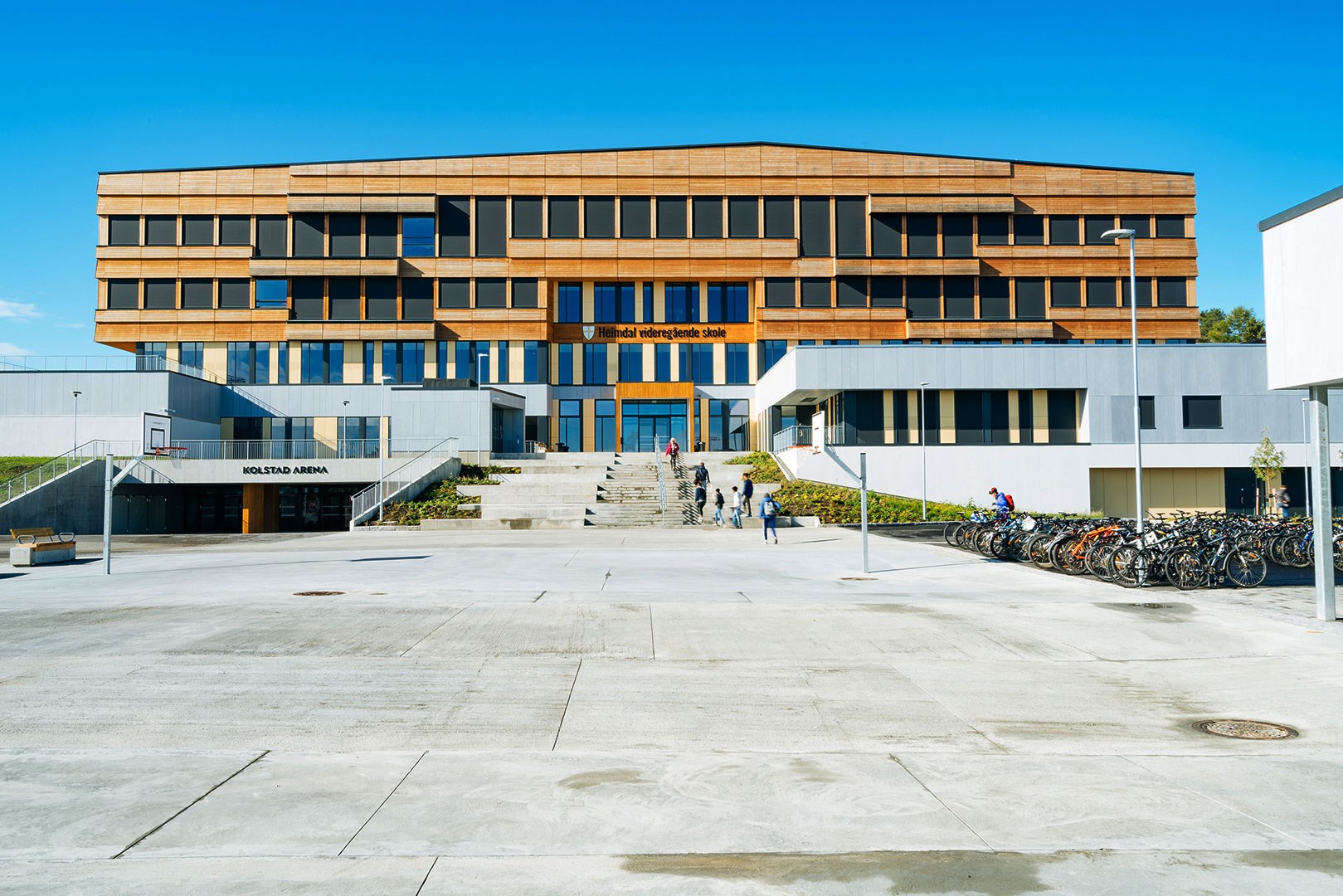 Heimdal High School will set new standards when it comes to energy efficiency, it will in fact produce so much energy that they will meet their own needs throughout the year plus a little more.

Early last year we caught up with Skanska's project manager for Heimdal High School, Jarle Refseth, and Chief Advisor Tore Wigenstad. Although we spoke to Jarle on a grey day, a big smile radiated from his face. 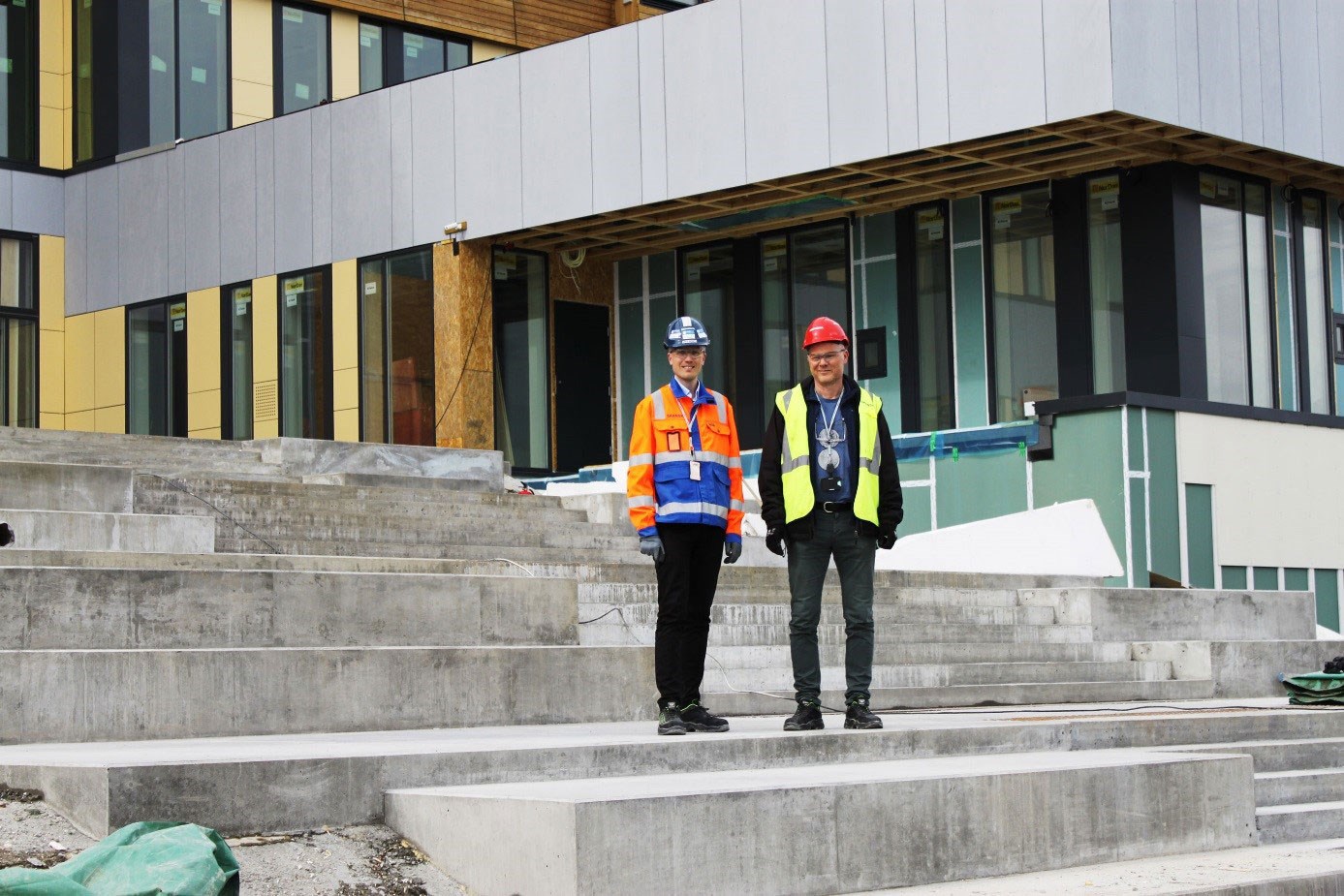 "I feel very lucky to have participated in one of the largest construction projects we have had in Central Norway, if not the biggest. With complicated technical requirements and its architecture, in addition to tight implementation time, it has been both challenging and rewarding" Jarle says.

The school is one of the pilot projects of ZEB (The Research Center on Zero Emission Buildings), and its goal for energy consumption is ZEB - 0. In short, renewable energy production will compensate for the emission of greenhouse gases that come as a result of the operation of the building. The building will in fact produce so much energy that it will meet its own needs throughout the year plus a little more. For example, the new Heimdal High School will distribute its surplus energy to warm an adjacent swimming pool.

"We at Skanska have gradually gained good experience in building with passive housing standards and high environmental requirements. Although the new school is another good example of what we can do when striving for environmental and climate goals, much of the knowledge applied here has been taken from former Skanska projects," says Tore.

Skanska is recognized as one of the leading green project developers and contractors in Norway. As a founding member of the Powerhouse collaboration we have built some of the world's most green and energy efficient buildings. One example is Powerhouse Brattørkaia located in downtown Trondheim just a short drive from Heimdal High School. The office building opened in March and is one of the world's northernmost energy positive buildings. The project was also the city's first fossil free site and is truly a trailblazing project in terms of energy and innovation. In short, Skanska has an impressive green footprint in Norway's third largest city.

Powering one of the world's greenest schools

At the heart of powering the new school is the CHP (combined heat and power) machine, which produces thermal and electrical energy from biogas.

"The biogas is made from waste materials, or biomass, and finished liquid biogas will be delivered here by a tanker. So instead of the harmful methane gas generated from the waste materials being released into the atmosphere, it is stored in tanks and then burned to produce energy," says Tore. 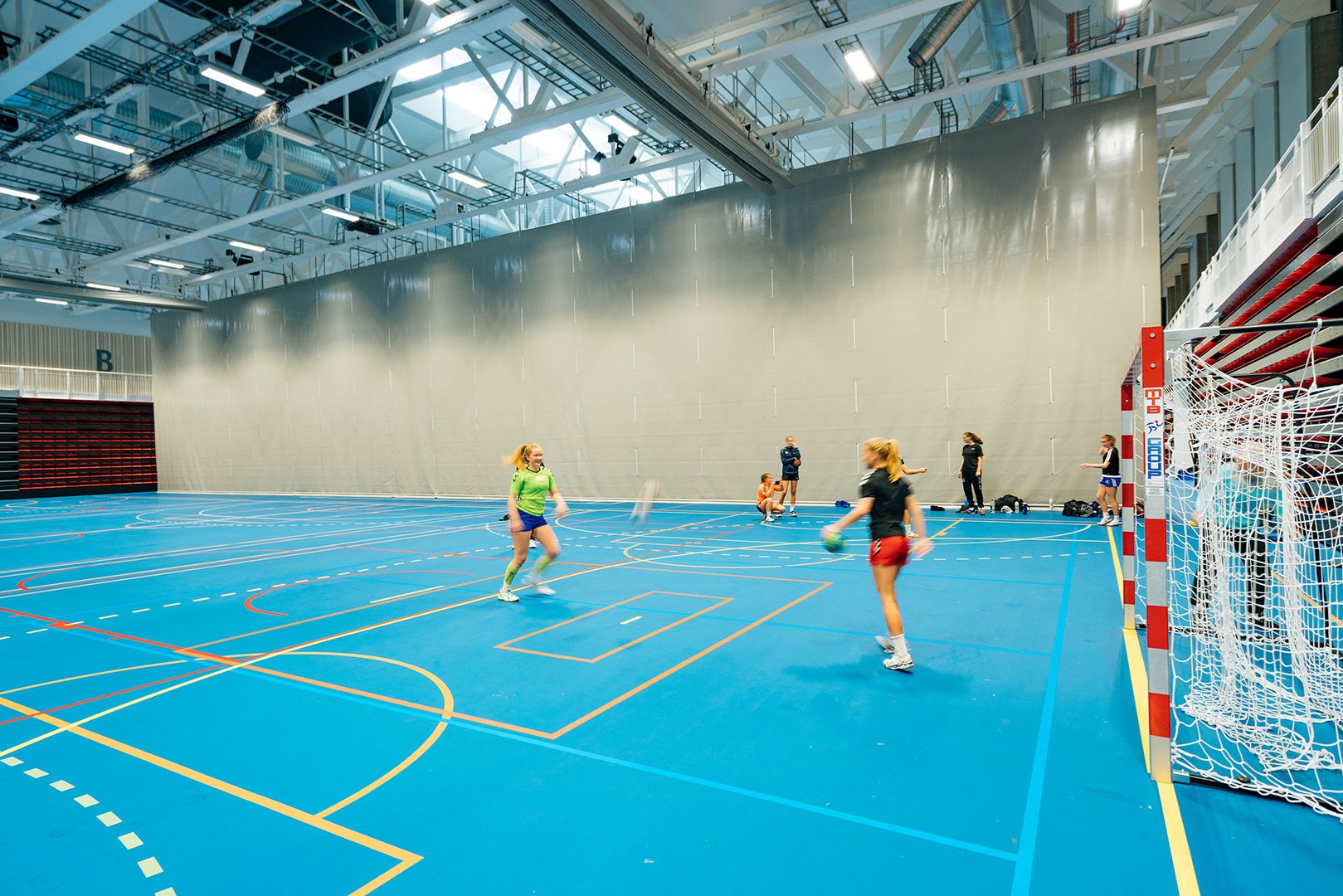 The school’s sports hall is the size of three handball courts, with room for up to 2,500 spectators. The hall will also function as the concert arena - with an audience capacity of 4,000.

In addition, there is a heat pump system that collects heat from the ground under the multipurpose hall. Twenty one wells are dug 250 meters down into the earth.

"These contribute to heating the building and the production of hot water," says Tore.

"We combine these two systems. The heat pump should preferably go all the time. If it fails to supply enough heat, the CHP comes in and delivers both heat and power. All roof spaces will be covered by solar cells. In other words, there will be many different systems that provide energy for the building." 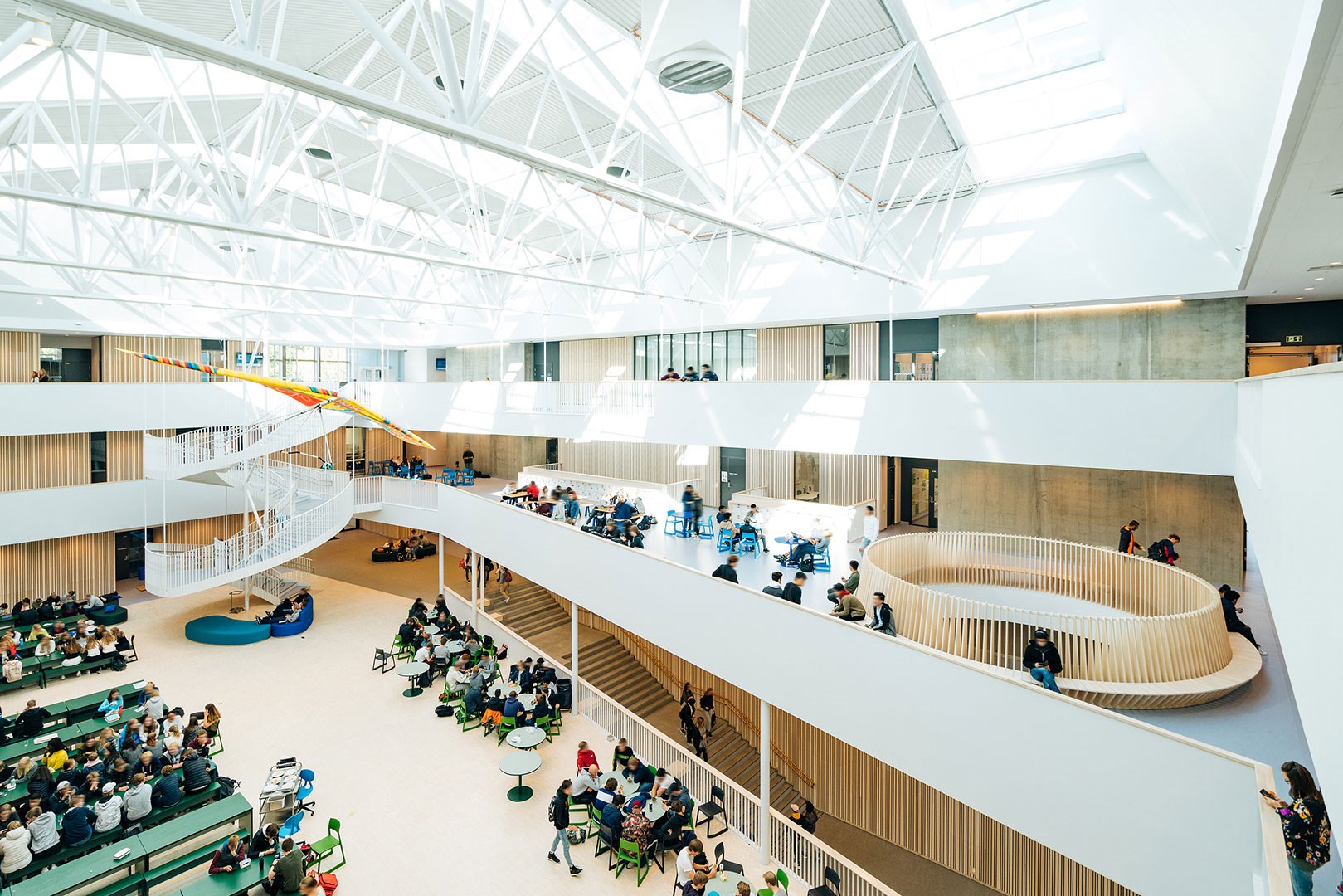 Heimdal High School is a facility full of light, rich with common spaces for learning outside the classroom, and fused with the latest technology.

A cultural and sports boost for the local district

In addition to the tough environmental and climate ambitions, the project is also part of wider initiative to promote the area, says Jarle.

"A political decision was made that this district needed a boost. The school and Trøndelag municipality will use the space most. It will be a multi-purpose building that also functions as a cultural and sports house for the local community here. There will be many facilities for sports, music, dance and theater."
According to Jarle, the sports hall is the size of three handball courts, with room for up to 2,500 spectators. The hall will also function as the concert arena - with and audience capacity of 4,000.

"People from all over the city will come here. This will really be an educational, sports and cultural boost for the district. The project with its strong social community focus, is very much in line with, the type of projects we at Skanska want to work with." 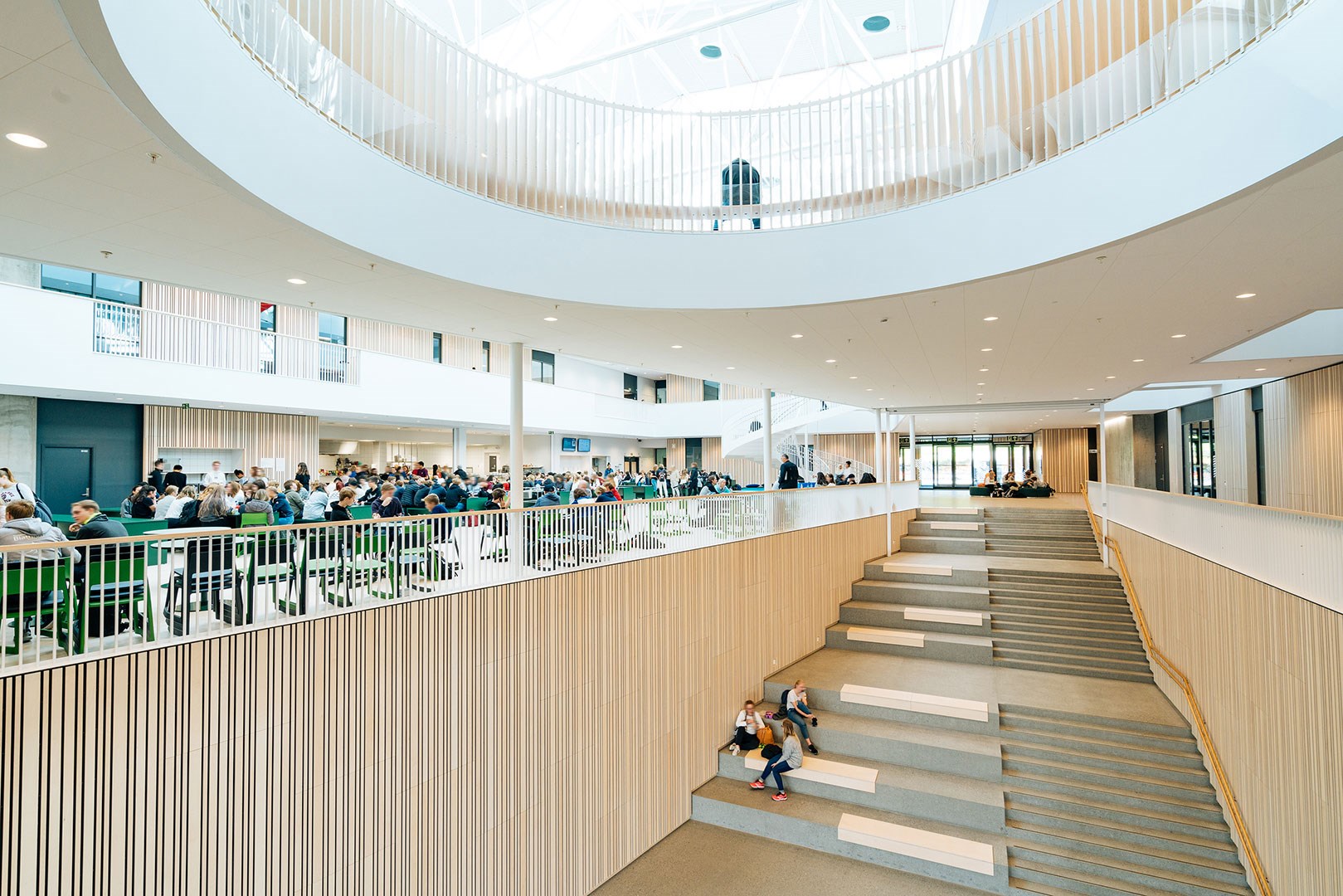 “People from all over the city will come here. This will really be an educational, sports and cultural boost for the district.”

We're on a Journey to Deep Green, creating buildings and civil infrastructure that have near-zero environmental impacts.