Re-using materials is a key step toward saving both money and carbon emissions. Skanska Norway is re-using concrete decks from an old government building in a new accident and emergency center together with a broad collaboration of partners using a particular method that has never been done on such a vast, industrial scale before.

In Oslo, hollow-core concrete decks are being carefully removed from a demolished nine-story government building. Skanska Norway will be reusing these precast decks in the construction of a new accident and emergency center in Oslo, reducing carbon emissions and creating a pathway that will eventually lead to reduced costs. The team isn’t aware of this specific method being done anywhere else in the world.

Implementing such circular approaches are key to achieving environmental and economic benefits, leading the building industry amid increasingly strict climate regulations, and achieving our own target of being a carbon neutral company by 2045.

“We have been looking at how we can reduce the climate footprint for new buildings by reusing materials,” says Henning Fjeldheim, Skanska Norway senior adviser in climate, energy and building physics. “Finally, we saw an opportunity to test it out in practice. After initial inspections, the core decks were considered technically reusable, which was later confirmed by full-scale testing.”

“This is unique, I don’t know that anyone else has used this approach anywhere in the world - at least not on a large industrial scale,” Henning adds.

Concrete decks account for the largest share of greenhouse gas emissions from materials in a new building with around 10%, while a recycled hollow-core deck has greenhouse gas emissions 90% lower than new units. Also, concrete decks make up a significant amount of the total waste in Norway: about a tenth of all the waste generated in Norway each year comes from concrete waste. Considering this, re-using concrete elements can contribute heavily to the achievement of the goals of the Paris Climate Agreement.

Henning also points out that a key driver for this pilot project are the benefits circular approaches can have for the building industry. This includes eventual economic gains from re-using materials.

“Reuse of hollow-core concrete decks is not just about reducing carbon emissions. What is pioneering is that we take the circular economy a step further in the construction industry. Instead of just demolishing the old concrete decks and using them as landfill, we build with them. This pilot project shows that the potential is great. Hollow decks are largely standardized, theoretically removable and there are many of them. This is by no means a low-hanging fruit, but the environmental benefits are high and the impact on how our industry works can be great,” says Henning further. 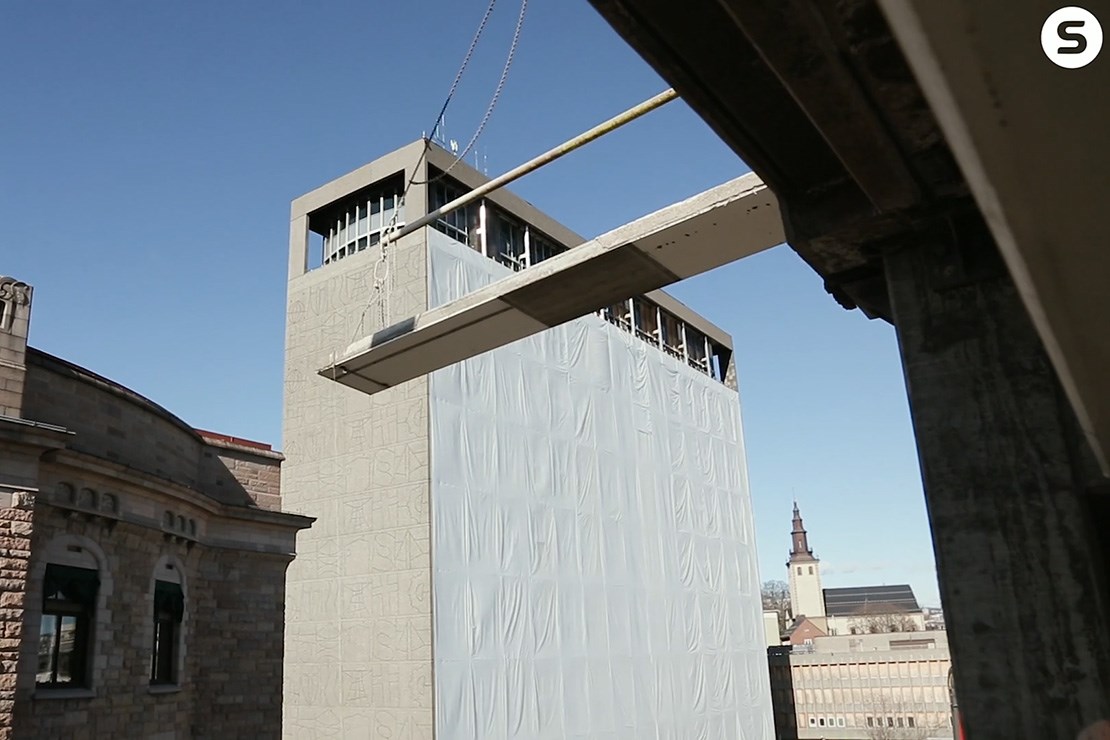 Targets have been set for near-zero emissions from the construction site and an ambition for the building to be certified to BREEAM Excellent.

A broad, inclusive collaboration is needed to realize this approach. Involved on the developer side are the public building units of both Norway and Oslo municipality; contractors Skanska and Veidekke; circular building materials consultant Resirqel; and Contiga, a precast concrete supplier. Also, on the team are the Norwegian University of Science and Technology (NTNU) and building products certifier Kontrollrådet, and this initiative has received funding from Enova, the Norwegian government enterprise that drives energy efficiency.

“One of the reasons why this project is so challenging is that the supply chain is turned on its head,” says Henning. “In this case, Veidekke has become an upstream supplier to Contiga. It is a whole new situation for both and is just one of many examples of how we have had to rethink and take on other roles. We have learned a lot from this pilot project, which we will take with us.”

The precast decks have proven to have maintained their strength. Near the end of this year, the team will start the process of assembling the decks in the major new accident and emergency center we are building. This center has very high environmental ambitions. In addition to re-using the hollow-concrete decks, targets have been set for near-zero emissions from the construction site and an ambition for the building to be certified to BREEAM Excellent. Our customer is highly pleased that we are taking such innovative approaches to help them achieve their own climate targets.