Working on top of the world

Deep inside the Arctic Circle, our team overcame the challenges of location and climate to safely blast a much-needed roadway tunnel through a mountain. Here's what it was like to be part of the team behind this accomplishment.

Oslo, Norway, is among the world's most northerly capital cities. Now imagine that you get into your car in Oslo and drive for about 15 hours further north until you’ve reached the Arctic Circle, the line on the map above which the sun doesn’t rise on the winter solstice. Now keep going north another eight or nine hours or so, deep into the Arctic, and you will eventually reach Sørkjosen, a village of some 850 inhabitants along the wind-swept shores of the Reisa fjord.

Here, just about as far north as you can get in Europe, Skanska has just finished constructing a 4.5 km tunnel on the E6 motorway. It's a project that will make life a lot easier for locals, and for the many truckers hauling fish from the Barents and Norwegian seas. One reason is that when the current stretch of the E6 gets blocked during wintertime, it means a 700 km detour via Finland.

Here, two of our colleagues share some highlights of what it took to make this project a reality in this extreme location.

A matter of pride

Tor Gildestad headed up this project for us. He saw it as an exciting challenge. “We Norwegians are supposed to be the experts when it comes to our local mountains and tunneling through them,” he says. “It became a matter of pride to show the rest of the world that we could do this better than anyone else.”

Developing the next generation

“Tunneling is definitely a team effort,” adds Tor. With a background as a drill and blast expert from the mining industry, he went for a mix of young engineers and more experienced leaders as he built his team of about 18 managers, guiding the work of about 75 tunnelers. “I wanted to give our young and talented engineers a chance to cut their teeth, under the supervision of us older guys. A mentoring program if you like.”

One of those young engineers is Lars Erik Skjolden. Only 23 at the time and fresh from finishing his bachelor’s degree in engineering, he was a HSE (Health, Safety and Environmental) and quality management adviser. In other words, he – under the guidance of a more senior colleague – helped ensure that quality was maintained and that safety was central to the project culture. There were two very important responsibilities, considering that every centimeter of tunnel required drilling and blasting with explosives. 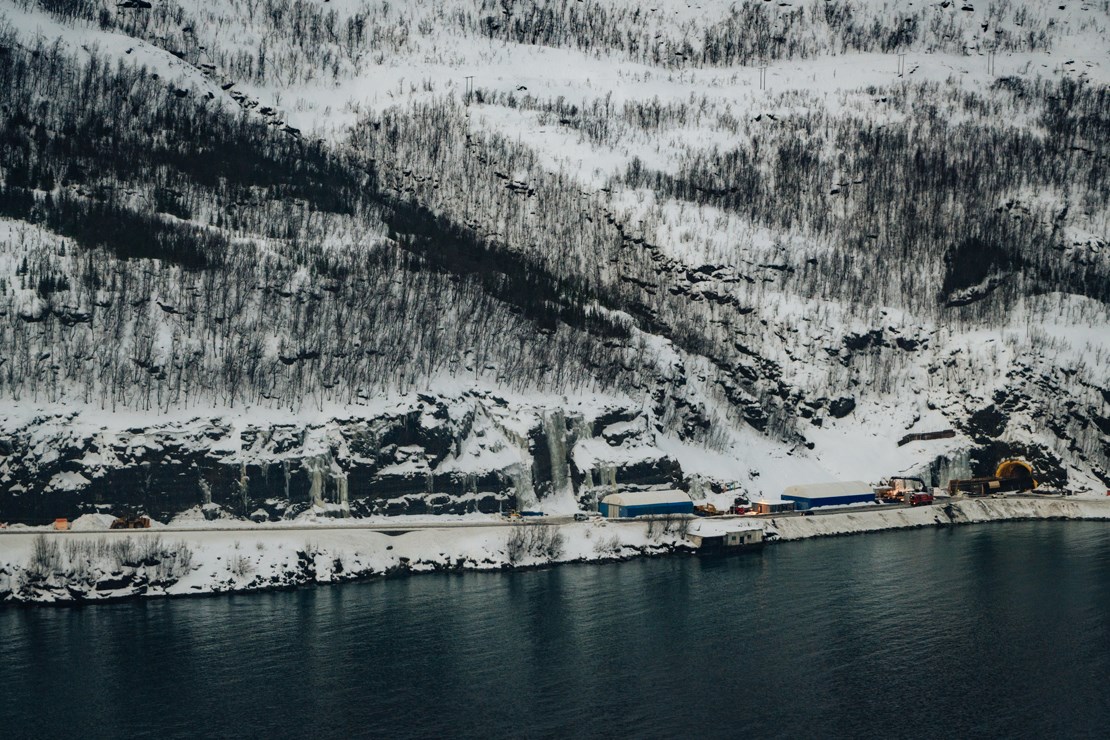 The tunnel reduces the chances of wintertime blockages on the critical route. A detour can stretch for 700 km, even reaching into Finland.

It might be hard to imagine the sheer amount of work it takes to build a tunnel. “It's a constant cycle of drilling, injecting explosives, blasting and clearing the rubble,” says Lars Erik. “After that, our Skanska geologists inspected the tunnel for quality, and then we secured the rock with bolts and fiber reinforced concrete and moved on.”

The crews in the tunnel worked two shifts on a 12-days-on and nine-days-off basis, while managers like Tor and Lars Erik work for four days and then have three days off. The workdays can be long, as schedules have to be met and quality kept up – though the extra day off at weekends helps make up for it.

The Arctic conditions are another challenge. “We use a lot of water when drilling and in wintertime, we need to freeze-proof everything,” says Tor. “The darkness can also be a factor, especially when clearing the heavy rubble from the tunnel. The remote location, along with snowed-over, icy roads, also makes logistics a lot more time consuming.”

It’s no wonder that the work sometimes takes a toll. “Sometimes I think that I should’ve gone for that office job in Oslo instead,” says Lars Erik, laughing. “But deep down I know I would've been bored. The positives of being on this project outweigh the negatives, for sure. The job is very fulfilling. Besides, there's never bad weather – just unsuitable clothing!”

“Not an ordinary job”

Most of the people who work on the project live in a local hotel during their stints in Sørkjosen. They spend their time off in the surrounding mountains, running, hiking and fishing. Hanging out in the TV room is another popular pastime.

And while living and working close together in such a remote location can be challenging, it's an environment that produces lifelong friendships.

“It's not an ordinary job and we’re together for 24 hours a day. So you form strong personal bonds,” says Lars Erik. Does this make his job as safety adviser easier? “Absolutely, a tight-knit crew of friends tends to look out for each other. And since we're all friends, no one hesitates to speak up when it’s needed.” 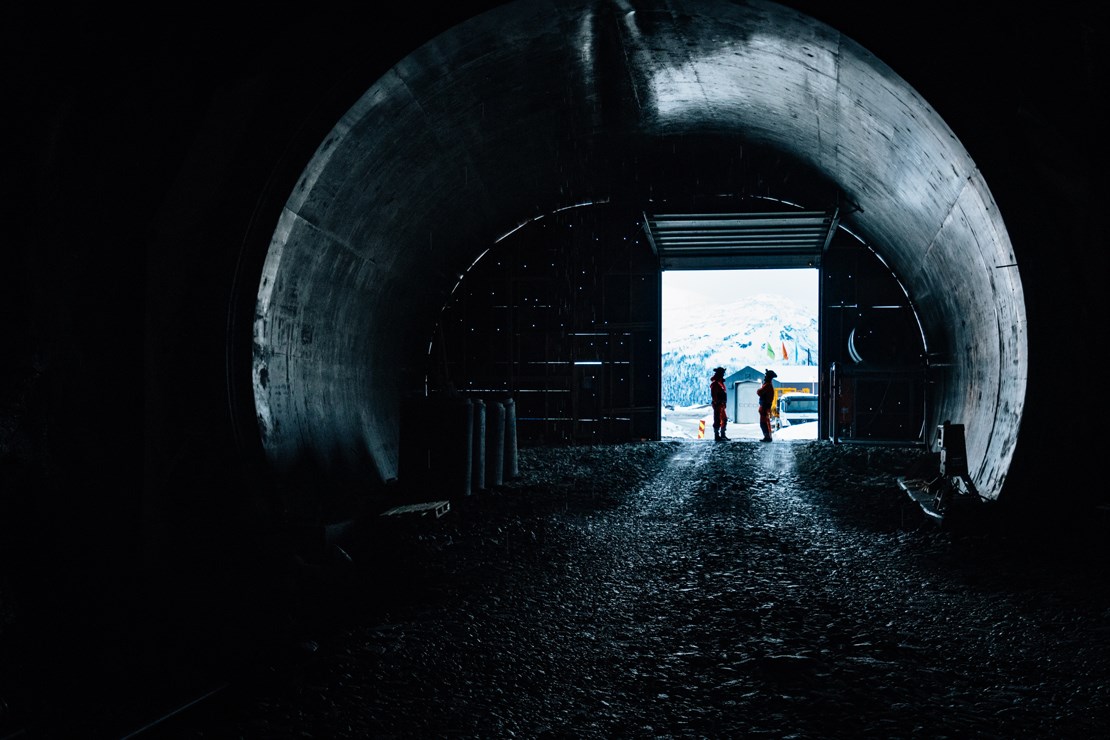 “The tunnel will be here for a long time and there's a sense of accomplishment in being a part of a project like this,” says Lars Erik. “When I look back on my time here, I'll feel a sense of pride.”

When asked about the highlights of the project, Tor and Lars Erik are in total agreement.

“When we fired the last salvo, and the crew tunneling from the east side met up with the crew tunneling from the west – that was special,” says Tor. “We blasted 4.5 km tunnel and the two halves were only off by about 2.5 cm where they met,” far within normal tolerances, says Tor. “We had a big party inside the tunnel that night. The entire crew was there, along with some 70 VIPs and locals.”

Ready for what’s next

So what will they take away with them from this project?

Tor: “The need for an honest and open relationship with the customer. It’s essential for a project like this. We've also had a lot of encouragement from the local population who've really made us feel welcome.”

For Lars Erik, it’s the experience of actually getting to do what he trained for in engineering school. “To be able to do it in real life, not just on paper, has been great. The tunnel will be here for a long time and there’s a sense of accomplishment in being a part of a project like this. When I look back on my time here, I'll feel a sense of pride.”

Safer travel with the new tunnel

In the Projects section you can learn more about the Sørkjosen Mountain Tunnel, which will make it safer and more convenient for drivers.

Tunneling around the world

Our expertise in tunneling is helping communities worldwide.

Skanska is delivering some of Norway’s most significant building and civil infrastructure projects.