When it comes to major sources of carbon emissions, you probably don't think of construction sites – but you should. Digging, lifting and heating requires vast amounts of energy that traditionally has come from fossil fuels, which produce harmful emissions. But there's a transformation underway to cleaner energy sources, with Oslo, Norway, at the forefront.

To build a nine-story office building in Norway, Stein Uwe Hiim is using traditional equipment and methods: muscular excavators to dig out the earth, towering cranes to lift materials, and intense heaters to guard fresh concrete from the frosty weather.

Diesel fuel, with the dirty and climate changing exhaust it produces, normally powers all that. But as much as possible, Stein Uwe and his team are using cleaner alternatives. Mainly they're using biodiesel, made from vegetable oils and animal fats, with a further goal of using as much electric-powered equipment as possible.

His efforts are part of a broader shift underway in Norway to curb local air pollution and carbon emissions from construction sites, a major but often overlooked source. In the capital of Oslo, for example, construction site activities – traditionally requiring lots of diesel, gasoline and other fossil fuels – account for 24 percent of carbon emissions.

Oslo is perhaps the center of this transformation.

By 2030, Oslo aims to reduce greenhouse gas emissions by 95 percent and eliminate fossil fuel emissions. Important to achieving these goals is changing how people and goods move. But Oslo also recognized a significant opportunity in its role as the second-largest public procurer in Norway – it's a major owner of buildings and infrastructure.

The city could be a catalyst toward lowering construction emissions, and that would provide a big boost toward its climate goals.

Through early planning and collaborating with our partners, only small changes were needed to build this Oslo kindergarten using biodiesel and electricity in place of most fossil fuels. (Image courtesy Omsorgsbygg)

To proceed, the city began a dialogue with the construction industry about how and when site emissions could be reduced. The answer surprised them: many practical and meaningful solutions – such as switching to cleaner biodiesel – were already available. But few customers were asking for the solutions, which can cost more, so implementation was limited.

Now Oslo is asking. The city updated its procurement standards to give higher scoring to contractors that will do more to reduce emissions. Other cities and big public agencies in Norway have expressed interest in taking similar steps, expanding the market for low-emission solutions.

Among the strongest tools

"Awarding projects to contractors that contribute to emission reductions is one of our strongest tools for reaching the climate targets," says Kjetil Lund, Oslo's Vice Mayor for Business Development and Public Ownership.

Skanska has completed two buildings in Oslo – one for the city – using biodiesel and electricity in place of most fossil fuels on the sites. We're still calculating the specific impacts, but it’s clear that through early planning and collaborating with our partners, only small changes were needed to adapt to the new energy sources.

Still, construction sites free of any emissions is the ultimate aim. That means doing more with electricity and hydrogen. A big challenge has been the lack of heavy duty equipment using those clean sources to fulfill their huge energy needs. That scarcity is beginning to change.

In January, a Norway-based dealer of Caterpillar construction equipment unveiled a fully electric 25-ton excavator model available for sale. Each battery charge provides five to seven hours of operation, with the same power as the original diesel version. 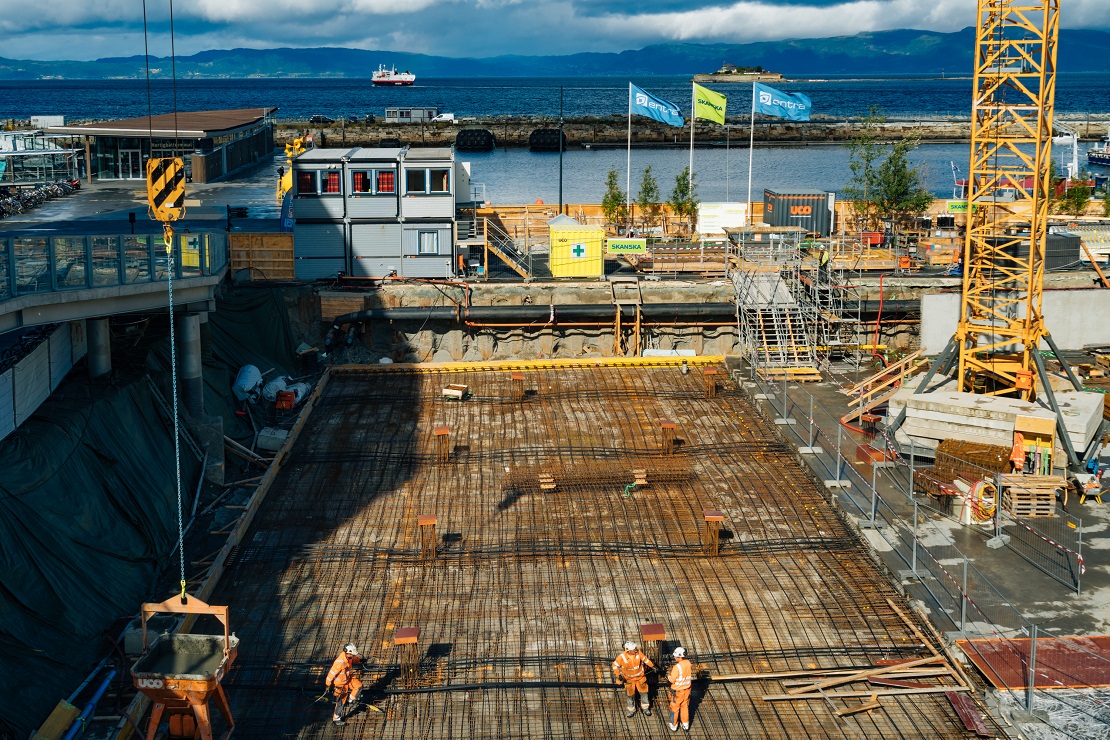 "Next time it will be easier and cost less to have a construction site free of fossil fuels," says Skanska's Stein Uwe Hiim.

To go even further, Skanska, Siemens and other partners are developing a 30-ton excavator to be fueled by batteries, hydrogen fuel cells or a combination, making it mobile on sites. We expect to have it on projects in Norway next year, part of our broader efforts to reduce carbon emissions.

In Sweden, similar efforts include partnering with Volvo Construction Equipment to develop a collection of electric quarry machinery aimed at lowering carbon emissions by up to 95 percent and quarry operating costs by 25 percent.

Another key consideration in reducing site-related emissions is switching to biodiesel and electricity to fuel the multitudes of truck trips transporting materials, tools and people to and from projects. A further point is extending the focus beyond reducing emissions to the more fundamental aspect of lowering energy needs. That involves changing ways of working, such as restructuring deliveries to cut trips.

An even broader perspective incorporates reducing the energy and emissions involved in producing what’s on those delivery trucks.

Much more to come

Expect much more to come as Norway rapidly advances toward emission-free construction sites.

"It's amazing to see what has happened with fossil free sites in the last year," says Randi Lekanger, Skanska Environmental Manager in Norway. "The market in Norway has really stepped up and said, 'This is what we are going for.'"

Skanska aims to have near-zero impacts on energy, carbon, materials and water – the environmental aspects our projects influence the most.

Understand our Journey to Deep Green

We have committed to significantly reduce the Group's carbon emissions footprint by 2030, in line with the Paris international climate agreement.