Creating a royal residence for those with dementia

Meet SilviaBo, a new type of BoKlok home intended to help elderly people with dementia. BoKlok, the stylish yet affordable housing concept owned by Skanska and IKEA, created SilviaBo in partnership with H.M. Queen Silvia of Sweden and her foundation.

Normally with BoKlok, the stylish yet affordable housing concept owned by Skanska and IKEA, each apartment's design and main features are selected for the customer. Kitchen cabinets, appliances, bathroom fixtures and more are the same in each unit – this standardization is key to BoKlok's ability to provide significant value to homebuyers.

But in the planning and design of a recent BoKlok project outside Stockholm, an exception was made to those rules. One person, a customer – but not in the usual way – was very involved in all aspects of creating the project, even down to such details as the color of toilet seats and the configuration of showers.

You might recognize this person's name – H.M. Queen Silvia of Sweden.

"She is truly engaged. This is her baby," says Jonas Spangenberg, BoKlok's CEO.

The "baby" is SilviaBo, a new type of BoKlok home designed for elderly people with dementia, which affects mental abilities. SilviaBo – named after the 73-year-old Queen – is the latest initiative for Silviahemmet, an organization Queen Silvia founded in 1996 to raise the level of dementia knowledge and expertise. Silviahemmet has certified about 800 nurses in dementia care, and has begun training doctors too.

For Silviahemmet's next step, the Queen saw a need for homes that would help people with dementia – especially the elderly – live better lives. Importantly, these homes would have special features to enable more people with dementia to continue living with their partner, with care provided in familiar surroundings. Too often nowadays, elderly couples living in ordinary homes are split apart when the dementia sufferer must go live in a nursing facility – a tragedy for both people. Also, the homes would be reasonably priced.

IKEA founder Ingvar Kamprad provided Silviahemmet with funds for this initiative. This led to the involvement of BoKlok, which was founded 21 years ago on the idea that "everyone should have the same chance to live well." 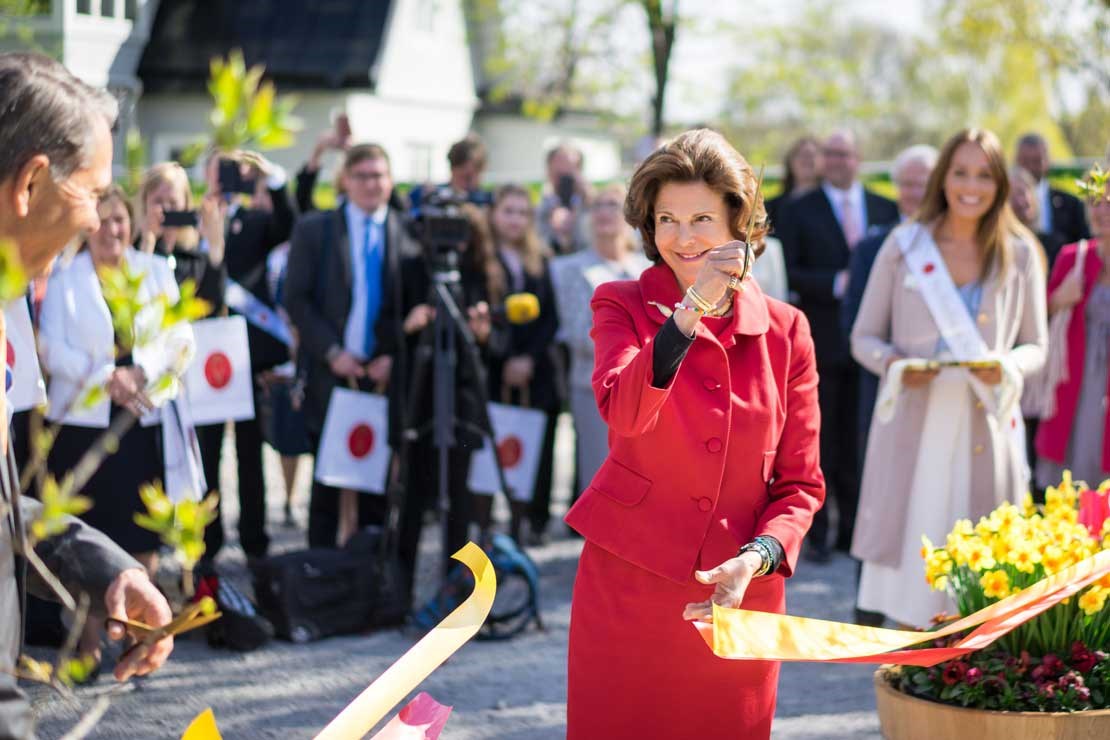 H.M. Queen Silvia of Sweden ceremoniously opening the first SilviaBo homes: These are BoKlok units adapted to help elderly people with dementia. BoKlok is a partnership of Skanska and IKEA.

In December 2015, BoKlok was contacted about adapting a standard home design for what would become SilviaBo – they readily accepted the request. Silviahemmet formed a steering group that met monthly to guide the project, with the Queen attending nearly every meeting. Work progressed on SilviaBo's design, which incorporates many small but important changes to help people with dementia.

Those changes include using bright red shower railings, doors and other components to be easily seen. To avoid confusing people with dementia, there are no mirrors and no dark-colored bathroom floors, and only old-fashioned knobs on kitchen appliances. A SilviaBo home has about 50 slight changes compared to a regular BoKlok unit, changes that help the elderly and those with dementia. (BoKlok plans to offer SilviaBo and a model tailored for seniors without dementia across the Nordics.)

In March 2017, the first two SilviaBo homes began to be assembled – a quick timeframe made possible thanks to the focus and effort of everyone involved. It’s a process of assembly, as also key to the affordability of a BoKlok home is a highly efficient system of industrialized construction in which truck-sized housing modules – complete with finished interiors including flooring and even cabinets – are produced in a factory. They are then hauled to each site and lifted into place to form the houses.

Queen Silvia was there to watch the first SilviaBo module be maneuvered into position.

"You can strongly feel that this is important to her personally," Jonas says. 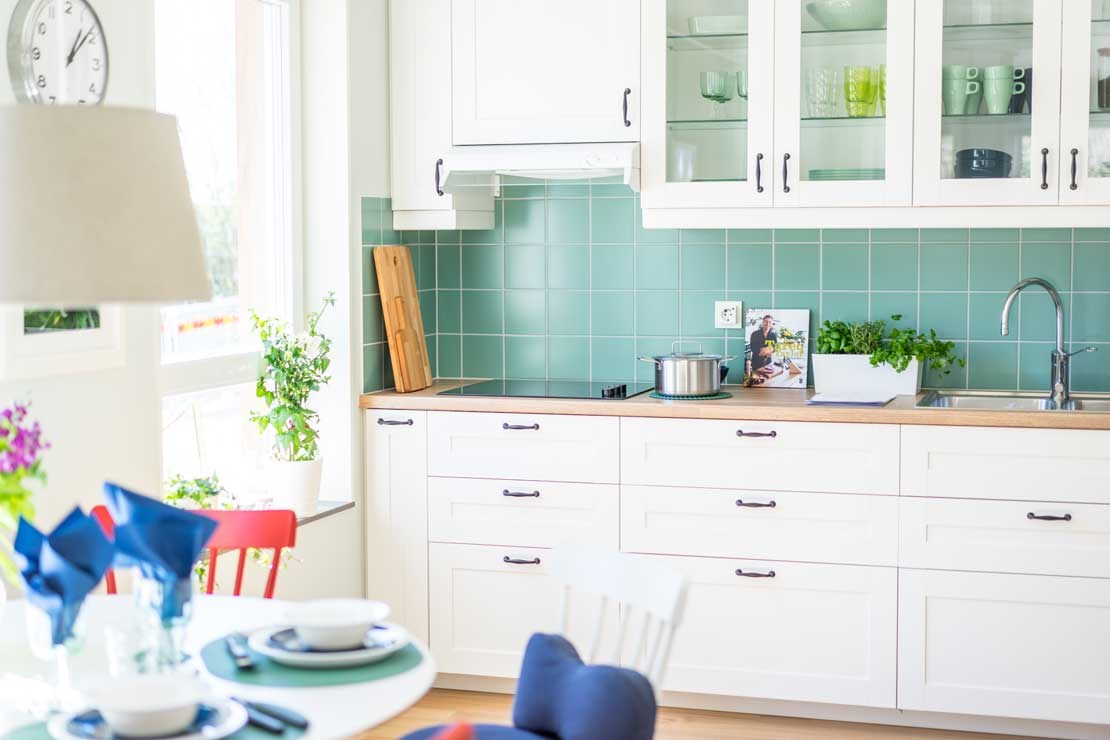 A SilviaBo home has about 50 slight changes compared to a regular BoKlok unit. These include having old-fashioned knobs to make it easier to operate kitchen appliances, and electrical outlets with timers.

On May 13, the first two SilviaBo homes – totaling eight apartments, each 55 square meters with two rooms and a kitchen – were officially inaugurated by King Carl XVI Gustaf of Sweden and Queen Silvia. The ceremony included a trumpet fanfare, and then the King and Queen toured the apartments, which are decorated with IKEA furniture and nature photos taken by the King.

Before those gathered that day, the Queen spoke about what SilviaBo means to her. Her mother, she said, suffered from Alzheimer's, a type of dementia. She helped her mother the best she could.

"I thought a lot about my mother," the Queen said. "Those thoughts were there all the time. How hard was it? What can one do to make it easier for those with dementia?"

With SilviaBo, the Queen has created an answer to her question. 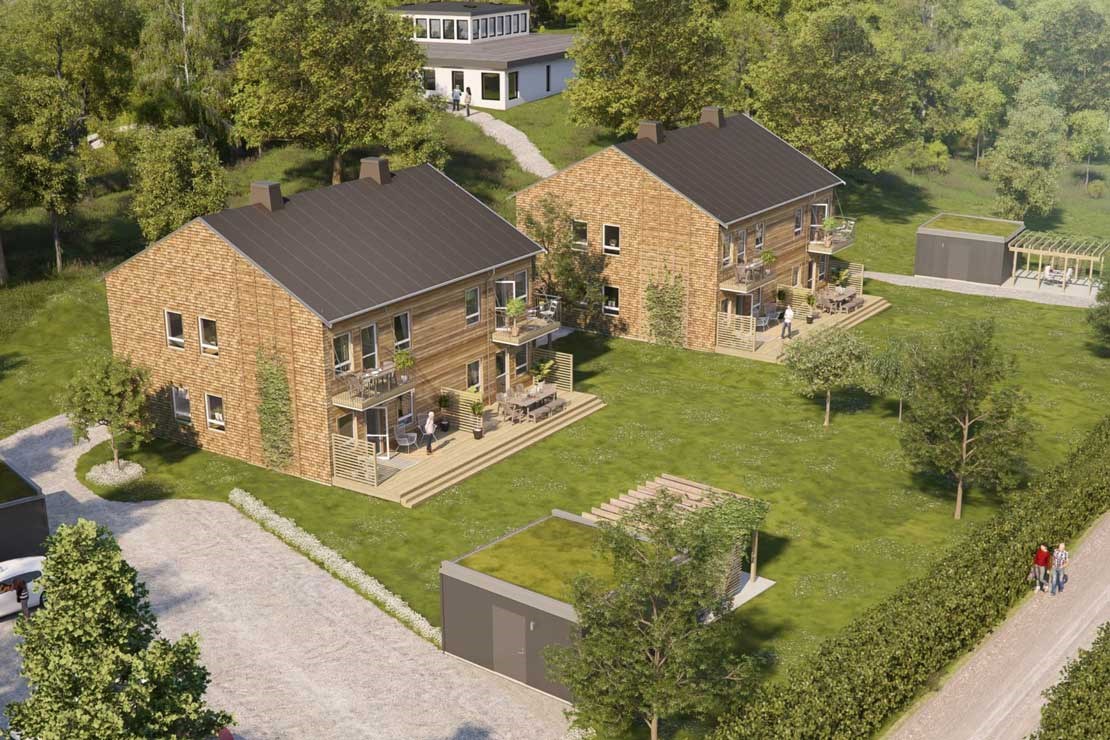 SilviaBo homes will enable more people with dementia to continue living with their partner, with care provided in familiar surroundings. Like all BoKlok homes, these are affordably priced.

Committed to improving care for those with dementia

Silviahemmet was founded by H.M. Queen Silvia of Sweden to raise the level of dementia knowledge and expertise.

BoKlok – a partnership of Skanska and IKEA – produces stylish yet affordable homes in the Nordics.