It's not always easy for foreign-born engineers and Swedish employers to find each other. Aiding in connecting them is our International Leaders Program. Here’s how it transformed Arwa’s life.

Arwa Abbas arrived in Sweden in December 2013 as a refugee trying to escape the war in Syria. She was in a new country, with a new language. She was nine months pregnant. And she was an accomplished engineer in within the construction industry, eager to continue with her profession.

Getting back to the type of work she had been doing – reviewing building plans and developing structural models – would take her about two-and-a-half years. She needed the right governmental approvals, local employers thought her Swedish wasn't good enough, and she had to learn about how the building industry works in Sweden. Still, she had much to offer. She needed a chance.

She found that chance in the International Leaders Program, which works to simultaneously solve two challenges for Swedish society: foreign-born engineers specializing in construction who are seeking jobs in that field, and a great need for those engineers by employers. In July, for example, 1,684 foreign-born construction engineers and architects were seeking jobs, amid 523 such vacancies, according to statistics from the Swedish Public Employment Service.

The International Leaders Program, developed and run by Skanska for six years, has pioneered a higher standard for integrating these professionals into the workforce. It offers a weeklong introduction to Skanska and our values and 11 weeks of training on leadership and construction in Sweden. These are followed by a 17-week internship on a Skanska site. We aim to offer those who complete the program a permanent position, building careers while strengthening our company.

"It's completely perfect," Arwa thought when she heard about the program, which is influencing approaches in other industries.

Determined to be chosen

Each year, about 200 engineers apply for the 15 or so available spots. Being accepted involves making it through a thorough application process involving the public employment agency and an assortment of Skanska managers. Arwa was determined to be among those chosen.

She was used to tackling big obstacles. What attracted her to the construction industry in her native Syria was the challenge of succeeding in a male-dominated industry in a male-focused society. After graduating with her civil engineering degree from Damascus University, she would be the only woman working on construction sites. 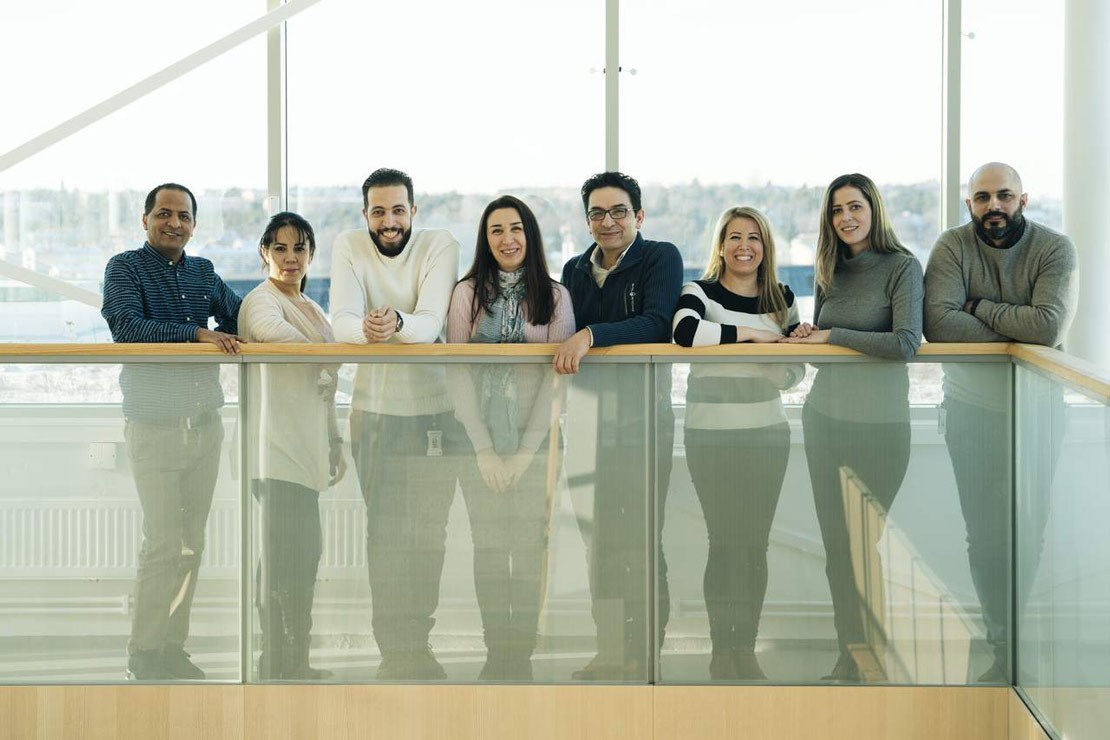 In Syria, she worked as a structural engineer, using computer modeling to determine how strong structures needed to be, considering forces from wind and earthquakes. And simultaneously, she worked as a permit engineer for the city of Damascus, reviewing plans of proposed buildings to ensure they met municipal standards. One of the highlights of this latter role was reviewing the plans for an 18-story Intercontinental Hotel, which would have been among that city's most important buildings.

"It was not normal to leave such a responsibility to a young girl, but I am focused on improving myself and I am a serious and responsible person – that is why they gave this project to me," she says.

Departing Syria meant leaving behind her career and all the success behind it.

With the International Leaders Program, Arwa aced her interviews and was accepted. There was the training, and then for her internship she was assigned to the team building an office development in the university city of Uppsala, just north of Stockholm.

She had always wanted to work for a big construction company, so having a role on a Skanska site was like a dream. Arwa arrived as the foundation works for the project, called Juvelen, were underway. The building would grow, and she would too.

"I became bigger and bigger with Juvelen," she says.

She found that a Swedish project team functions differently than those in Syria. For instance, rather than a site manager doling out orders, all the dozens of workers on the Juvelen site gather each morning to review the day's upcoming activities, a discussion that emphasizes potential risks and keeping everyone safe.

In this new environment, she came to appreciate the strong sense of teamwork. In particular, how her supervisors took the time to clearly explain what she should and shouldn't do, providing her with a very good start.

"First time in my life to cry like that"

But there were tough aspects too. Though she had spent one-and-a-half years studying Swedish, listening to and speaking this language for nine hours a day required intense concentration – this great mental exercise caused headaches. And it was a two-hour train trip each way between her home and the project site. At the end of the workday she would arrive home exhausted, with little energy to play with her baby daughter, under the care of her husband.

During her fourth week on the project, she reached her limit while taking part in a team-building activity. Struggling to understand all that was being said in Swedish in a new environment, she excused herself, went into a lavatory, closed the door and started crying.

"I think it was the first time in my life to cry like that," she says. "I remembered my life in Syria and the successes I had there, all it took to make it to Sweden, the long nights I waited to have a new job, how tired I was from starting from zero and how I felt like a child who hasn't the language to say what he or she wants to say."

She adds: "I thought that once I found a job all my problems will be over. But I was wrong." 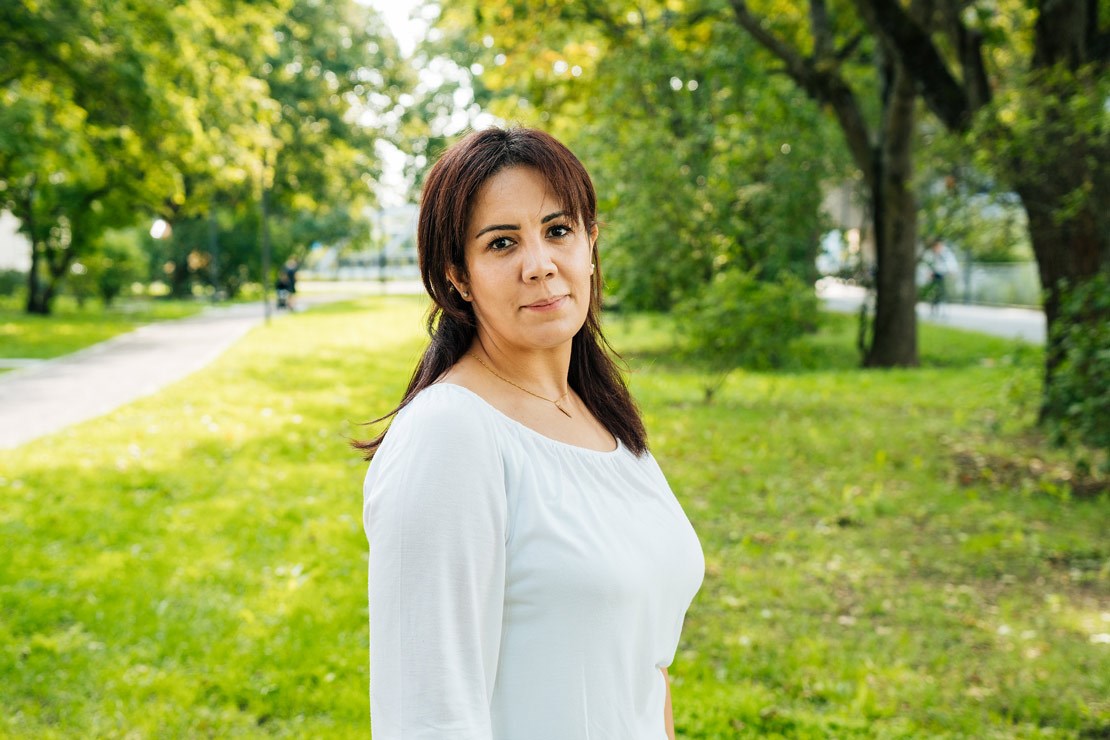 Arwa wants to keep moving ahead: with Skanska, her career and her Swedish language skills. "It is my dream to be myself again," she says.

Supported by her team

She tried to muffle her sobs, but her team heard them. After Arwa reappeared, the head of the project's construction, Gunilla Dahlstedt, gently guided her to a quiet area. "Is there something we don't know about?" Gunilla asked.

"I needed to let go of all the emotions from my long journey," Arwa explained.

Gunilla said she understood. "It's very normal to feel like this when you are starting your life again. We are here and will help you."

Arwa was buoyed by Gunilla's support, which she didn't expect as Swedes tend to be reserved. She went on to complete her internship in a very good way, and we offered her a full-time project engineer role on the same Juvelen project – she accepted. The project, scheduled for completion in spring 2019, has risen to become a gold-colored landmark, with Arwa contributing much to its realization.

Arwa has taken a "huge leap from not that long ago," says her supervisor, Ambjörn Gille. She's now handling much of the project's procurement, and is even writing contracts in Swedish. With her digital skills, she quickly became the team's expert on the scheduling software. And now she is even leading courses on working with diversity and inclusion for colleagues across her district.

But her biggest contribution might have nothing to do with engineering.

"It's been really great to get a new point of view on things," Ambjörn says. "Arwa has such a different experience and background from the rest of the team. She can think of things in a really different way – it gives us a new perspective. We can look more broadly at different issues and solutions."

Almost back to being herself

Arwa thanks her family and her project team for their support. She's in a better position now, with a much shorter commute to work. She wants to keep moving ahead: with Skanska, her career and her Swedish language skills. It's important to her that she be fully able to express herself in Swedish – she sees that as the missing piece to truly be part of her new society. In a few years, she knows she'll be there.

"It is my dream to be myself again," she says.

The application period for the seventh edition of the International Leaders Program opens in January.

We’re focused on achieving a more diverse and inclusive workforce to build careers while strengthening our company, helping us deliver the best solutions to customers.

More on our diversity and inclusion focus
lShare
Last updated: 9/6/2018