Imagine buying a new home from the comfort of your living room sofa and without ever having to sign a piece of paper. Thanks to a new application of blockchain technology, homebuyers in Finland can do just that, putting them at the forefront of a global trend with the potential to transform the real estate industry.

Liisa Lintula didn't expect to be a part of history when she first started daydreaming about purchasing a new apartment in the Finnish capital. But a stroll with her dog in the summer of 2017 transformed her into a digital real estate pioneer.

Living in Helsinki, Finland, she was passing by the historic Telakkaranta shipyard district when she noticed signs promoting a new residential development. The former heart of the city's shipbuilding industry, Telakkaranta is being transformed from abandoned docks to a modern destination filled with homes, offices, shops and restaurants.

"It offers water, great light and a unique atmosphere. I just saw myself living there," she recalls.

Later that day, Liisa returned home, logged on to a Skanska website and registered her interest in purchasing an apartment.

What Liisa didn't realize at the time was that those initial clicks would lead to her being the face of a global trend with the potential to reshape the residential real estate industry. A few months later, she would appear on TV screens, websites and newsstands across Finland after she became one of the first people in the world to buy a new home digitally.

"It feels great to be part of such a revolutionary development," she says.

Opening the door to digital transactions

Like many industries, real estate is in the midst of a technology-driven transformation. Online property listings have long been a part of the homebuying journey in Finland and elsewhere, and such new digital tools as virtual reality tours have made the screen-based experience even more realistic.

Despite such advances, the actual home buying transaction has largely remained analog, complex and time-consuming. Paper documents must be printed and signed. In-person meetings must be scheduled. All parties must be in the same place at the same time.

"If someone falls ill, you have to reschedule the whole thing," Liisa explains. "It's odd that buying a home is still so clumsy."

But in Finland, a new law that took effect in January 2019 has opened the door to all-digital sales of apartments. This has the potential to make in-person contract signings part of history, saving time and money while providing more flexibility.

Traditionally, purchasing an apartment in Finland has meant buying shares in a housing company, with proof of ownership transferred via a paper certificate that buyers are responsible for storing themselves, often in a bank safety deposit box. However, the new law created a digital apartment ownership registry managed by the National Land Survey of Finland. New housing companies and the apartments within them must use the registry, while existing housing companies have until 2022 to transition.

"You no longer need a piece of paper to prove ownership, which means the whole transaction process can be digital," explains Sami Honkonen, founder and CEO of Tomorrow Tech, a Finnish technology company that saw an opportunity when the government announced the changes in 2016. 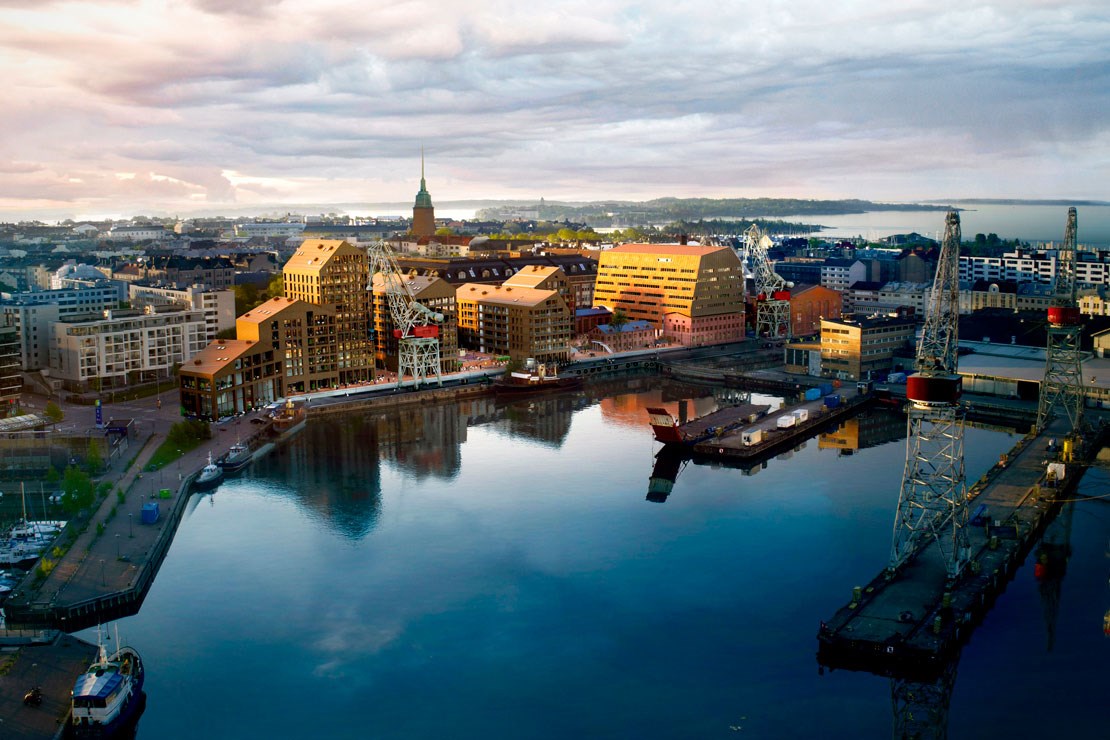 Helsinki’s Telakkaranta district is being transformed by Skanska from abandoned docks to a modern destination with homes, offices, shops and restaurants.

Soon after hearing about the government's plans, Sami and his colleagues came up with a vision: a completely digital transaction process powered by blockchain, the same technology behind bitcoin. With blockchain, transactions are securely and transparently stored across multiple computers to create a verifiable, permanent record.

"Real estate is a textbook example for where to apply blockchain," Sami explains.

Major banks soon got involved, as did the Tax Administration and National Land Survey. Skanska reached out to see how housing developers might connect to the platform.

After more than a year of arduous development work and balancing stakeholders' interests, the DIAS platform was born. With DIAS, real estate developers, estate agents and banks can transfer information, contracts and payments in real time, enabling automated data sharing and signings between apartment buyers and sellers.

"You can go online, find a property, reserve it and then – whenever and wherever it suits you – complete the whole transaction digitally," Sami explains.

In neighboring Sweden, the country's land registry agency has been experimenting with blockchain to record property transactions since 2016, leading to a blockchain-powered property sale in June 2018. And last October, a property in Spain was sold via a blockchain-enabled platform. Authorities in the United States, Australia and the Netherlands are also exploring different ways to introduce blockchain into real estate transactions.

Besides more convenience and transparency for buyers and sellers, digital property sales are also expected to bring significant cost savings for the industry through more efficient processes. For example, Moody's, the credit ratings agency, estimates blockchain-based mortgage applications could lower costs by up to USD 1.7 billion a year in the US. Blockchain's likely expansion to commercial real estate would provide further benefits.

"A step closer to my dream"

Despite all the excitement about Finland's new digital property registry and the promise of blockchain-powered property sales, the DIAS platform still needed to be tested before the new law took effect. When Skanska contacted Liisa about having her planned purchase of a new apartment serve as the pilot transaction, she took the opportunity.

"Once I realized how simple the process would be for me as a homebuyer, I really got excited," she recalls, calling it a "natural step" in her home buying journey.

"Everything is virtual these days. The whole process was based on 3-D visualizations -- from the view from the balcony to the interior," she explains, adding that she hasn't even seen her actual apartment, as the building will be completed in 2022.

And so, on December 11, 2018, Liisa found herself at the center of a special event at Skanska's office in Helsinki. Journalists surrounded her, eager to witness the country's first digital apartment sale.

As she began entering information on the screen, Sami's pulse quickened.

"I was really scared," he recalls. "This wasn't something we could practice."

A few minutes later, it was done. Liisa was the proud owner of a new home.

"There were no surprises. Everything went as planned and the platform worked like a charm," says Liisa.

In the days that followed, Liisa was featured in a slew of news reports about the historic transaction, which many consider among the first of its kind globally.

"There was a lot of focus on the software, but for me it was still all about buying a home," she says. "Now I am one step closer to my dream of living in Telakkaranta." 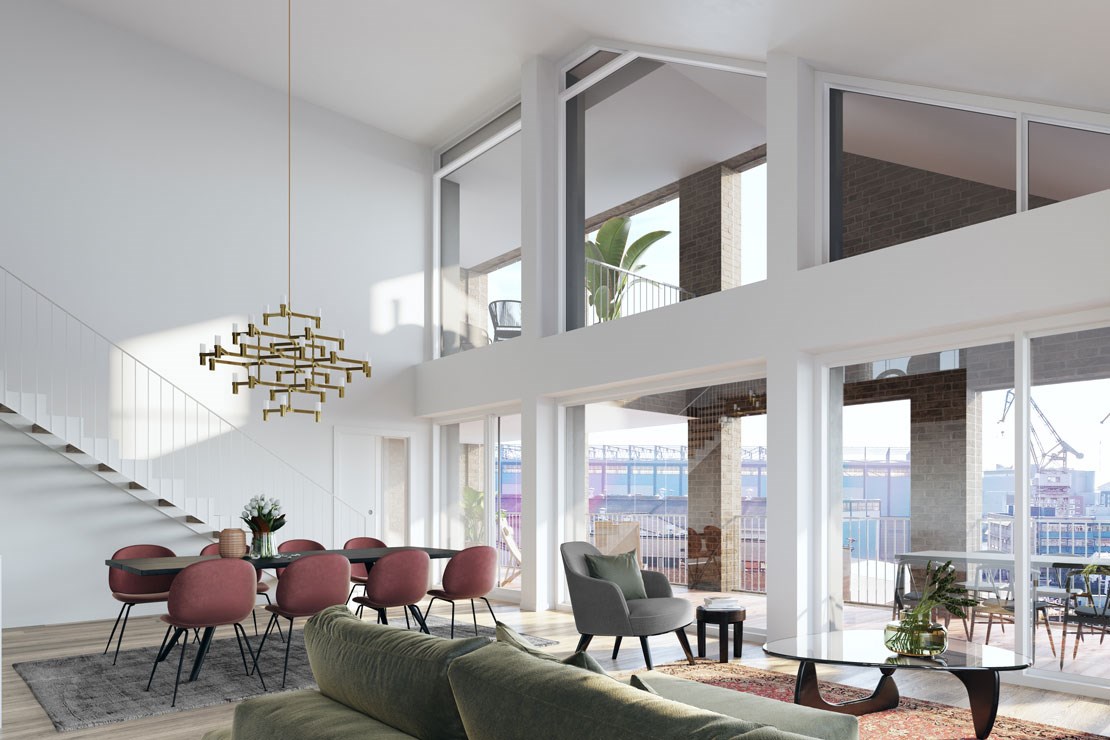 Soon everyone will have the option of digitally purchasing a new home at Telakkaranta. “We feel strongly that this is the future,” says Skanska’s Marja Kuosma.

Despite Finland's new laws, the switch to all-digital property sales will be gradual as technology and mindsets adapt. Others wanting to digitally purchase a home at Telakkaranta will need to wait until the system is ready for commercial use, likely this summer. By year's end, Skanska aims to have all our new Finnish residential developments in the DIAS system.

But even then, this will be an additional way for apartment sales, not the only way.

"Even if not every client is quite ready to abandon the traditional way of buying a home, we feel strongly that this is the future," says Marja Kuosma, Skanska's residential sales and marketing director in Finland.