The new Slussen bridge has arrived in Stockholm, after traveling 20,333 kilometers from China. This journey enables a project that will benefit Stockholmers for more than a century.

At the center of Stockholm is Slussen, a transportation hub that more than 450,000 people pass through daily. Yet Slussen is more. It’s also a lock that protects Stockholm’s drinking water supply and it serves as a meeting point in the central city.

With so much happening at Slussen, it’s a place full of motion, especially now: this 80-year-old infrastructure is worn out and undersized for future needs, so it’s being replaced in one of Sweden’s largest construction projects. Each day, an assemblage of cranes, trucks and hundreds of workers build toward a new, better Slussen, with all activities carefully planned to disturb the life of the city as little as possible. Skanska is responsible for engineering and constructing much of this work for the City of Stockholm.

Yet perhaps the most motion with Slussen is not in Stockholm but rather is on a ship. The new Slussen bridge was built in China and is being transported in one gigantic piece to Stockholm. This 140-meter-long, 3,500-tonne package is expected to arrive in Stockholm in March. Then through a carefully controlled sequence of activities, it will be guided into its new position, connecting Stockholm’s Old Town with its southern island of Södermalm. Once in place, this bridge is not meant to move for at least 120 years. 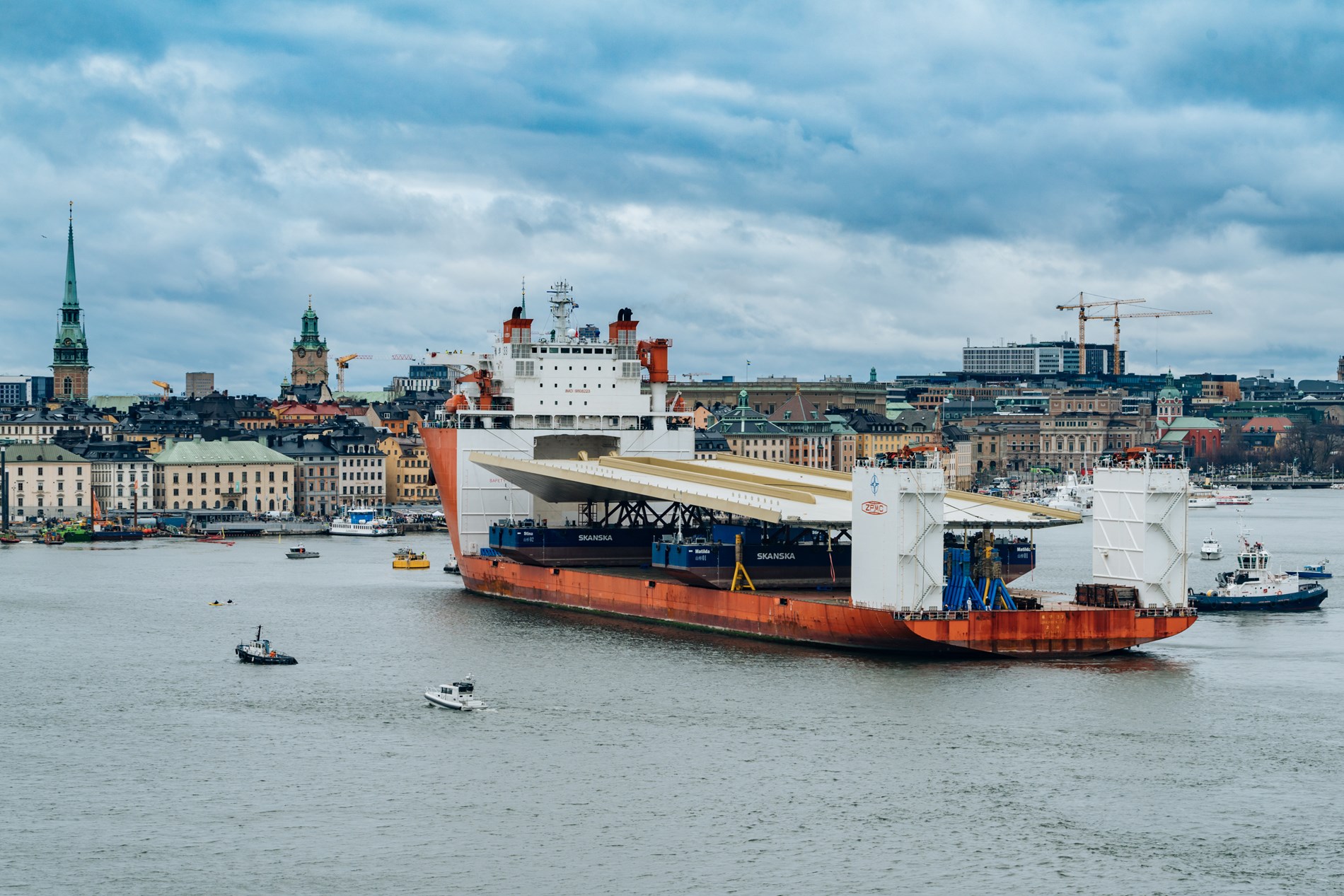 The new 140-meter-long Slussen bridge after arriving in Stockholm harbor.

The new steel bridge hads been on the seas since January 2. This ambassador of Stockholm – and of Skanska – traveled 20,333 kilometers, passing off India’s southern tip, through the Suez Canal, across the Mediterranean Sea and through the English Channel and the Baltic Sea. It’s been a challenging journey, as tough weather conditions kept the ship, the Zhen Hua 33, anchored off Spain and Portugal for about a month to await calmer waters. This delay was necessary to help enable a safe passage.

To reduce the environmental impact of the bridge’s transportation, Skanska offset the carbon emissions of the sea transport through a UN-approved body.

That the bridge was produced in China was due to the specialized nature of the manufacturing and the qualifications and availability of relevant global suppliers.

“There are not many suppliers who can manufacture a steel bridge with this size and complexity,” says Mats Strindevall, head of Skanska Sweden’s steel unit. “Together with the City of Stockholm, we decided that the bridge would be manufactured in one piece.”

To manufacture the bridge, Skanska contacted several suppliers, mainly from Europe and China. We thoroughly evaluated qualified suppliers before the bidding process began. This process included visits to these companies’ facilities and conducting audits of their performance with working conditions, ethics and the environment. 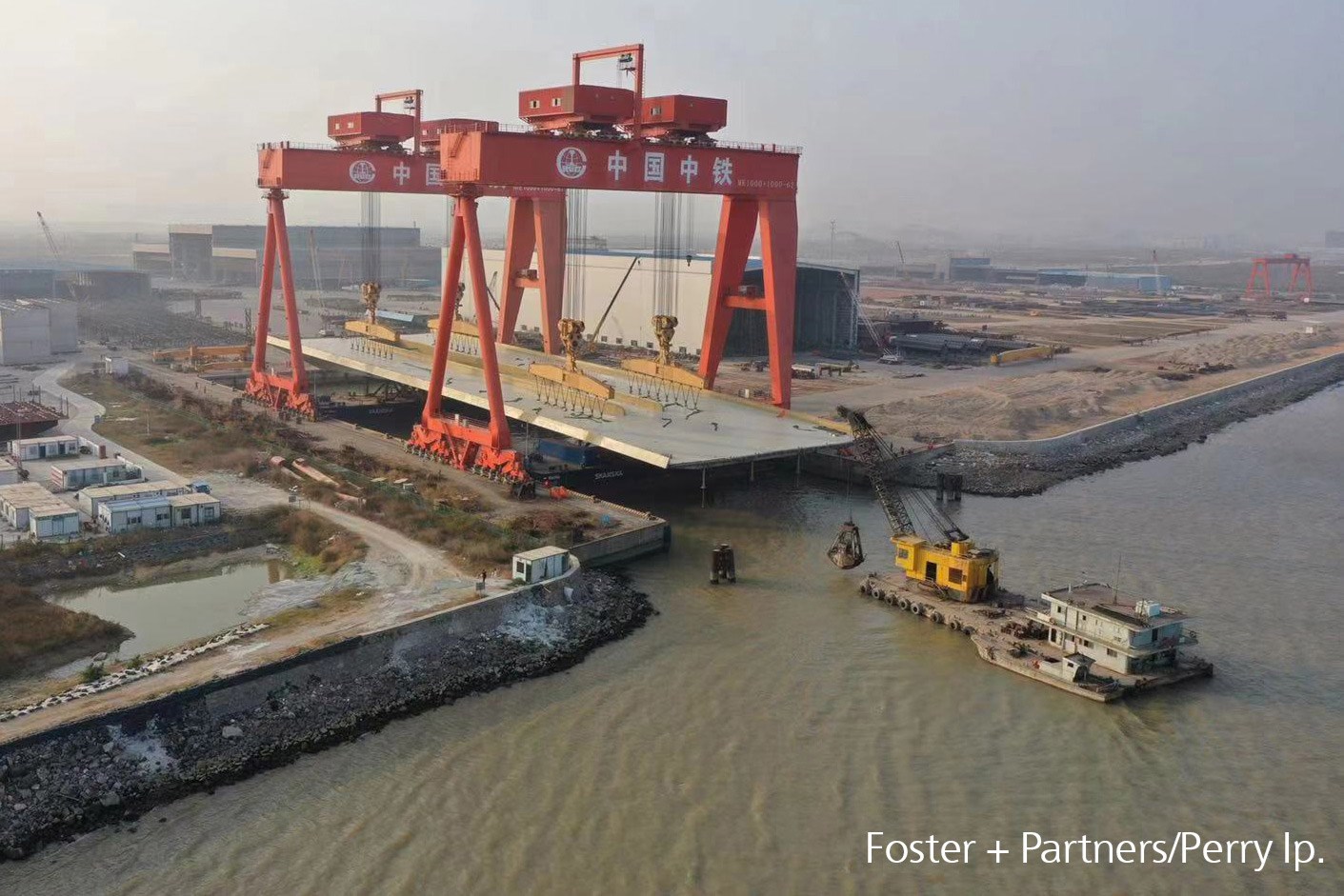 Cranes lift the 3,500-tonne Slussen bridge onto pontoons in China.

In the end, we chose China Railway Shanhaiguan Bridge Group (CRSBG), one of the world’s largest steel bridge manufacturers. Late last year, CRSBG completed manufacturing and assembling the Slussen bridge at a shipyard in Zhongshan outside Hong Kong. 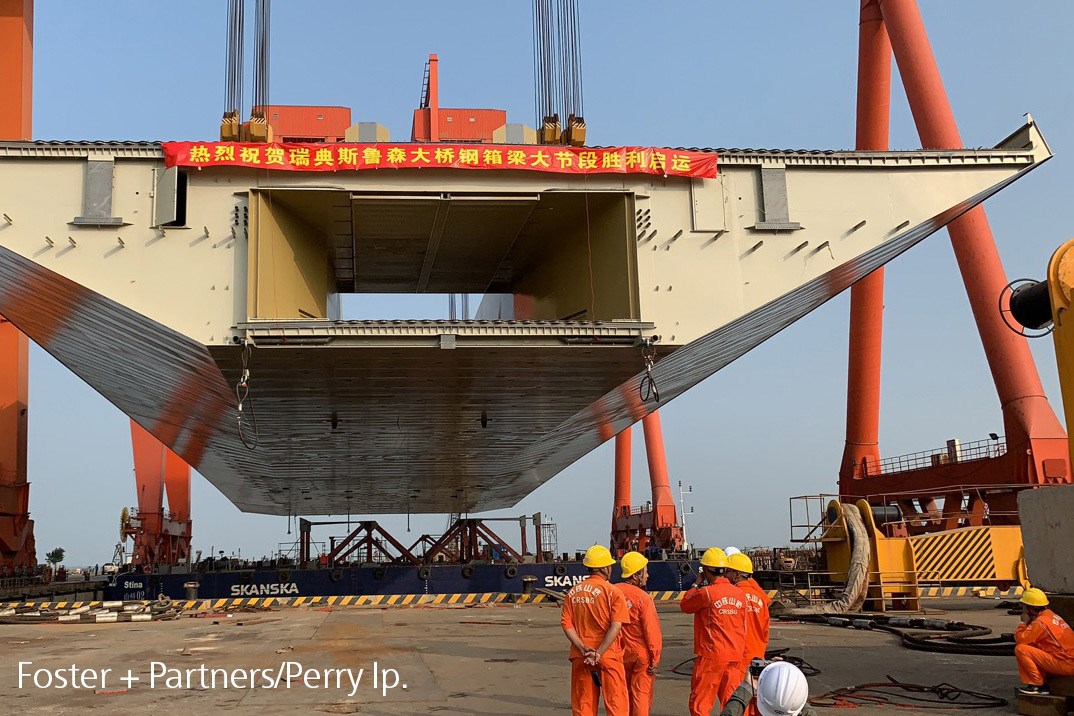 The new 45-meter-wide Slussen bridge – which will have lanes for vehicles, cycles and pedestrians – being lowered onto pontoons.

Coordinating the manufacturing of the bridge in China with the simultaneous construction of its concrete support structure in Stockholm has been among the project’s biggest challenges, says David Karlsson, Skanska Sweden’s production manager for the bridge project. The team focused on overcoming challenges relating to distance, languages and ways of working, ensuring careful coordination of the work.

Skanska builds the structure to support the new Slussen bridge in central Stockholm.

The new Slussen bridge transported as a single unit by a semi-submersible transport ship.

After the Zhen Hua 33 arrives in Stockholm’s harbor, the ship's deck descended a few meters below the water surface. Then the bridge floated on the pontoons it has been resting on since it was loaded onto the ship. 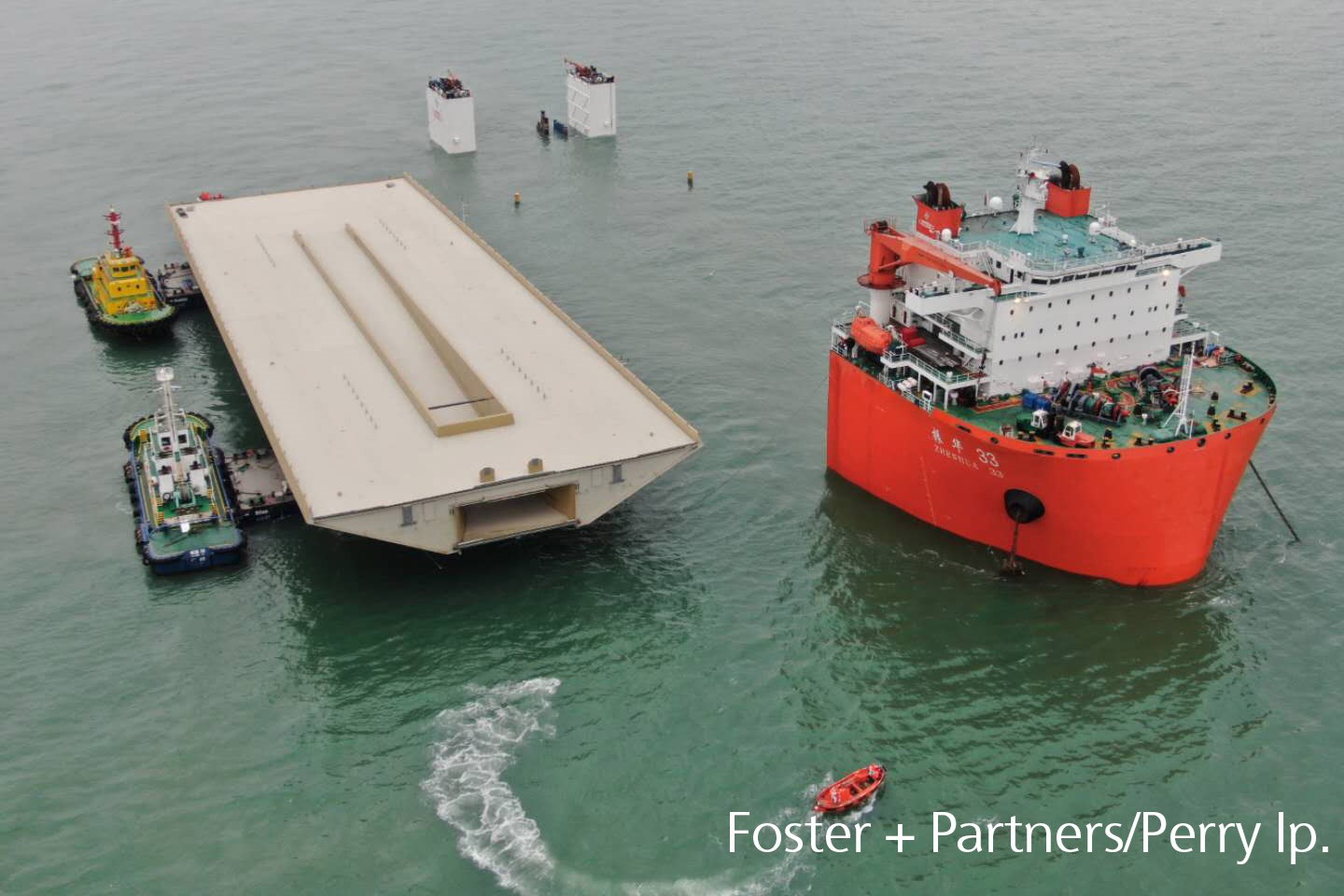 The new Slussen bridge floating on pontoons as it is loaded onto a semi-submersible transport ship.

Tug boats guided the bridge into position, at which point we filled the pontoons with water to lower the bridge onto its supports. Then our team used winches and lever blocks to ensure the correct alignment. With only 25 centimeters of tolerance between the 140-meter-long bridge and its supports on both sides, the structure must insert precisely into place – this delivery can’t be returned.

“Every piece of the puzzle has to fit,” says David Karlsson. 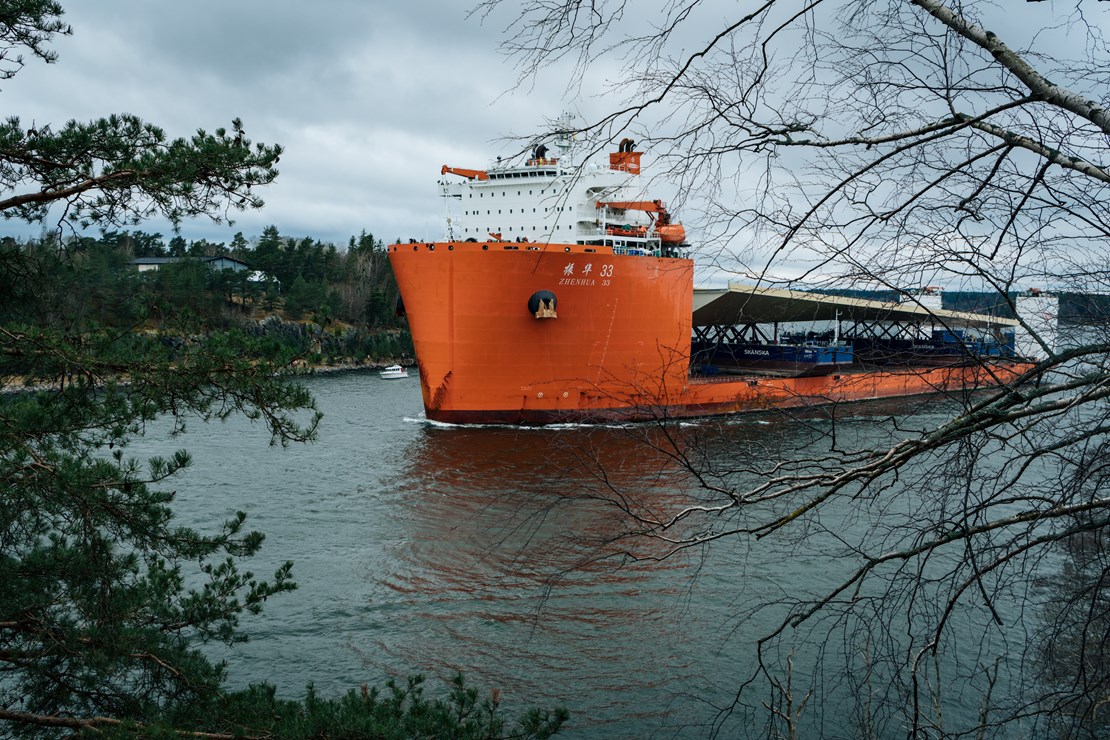 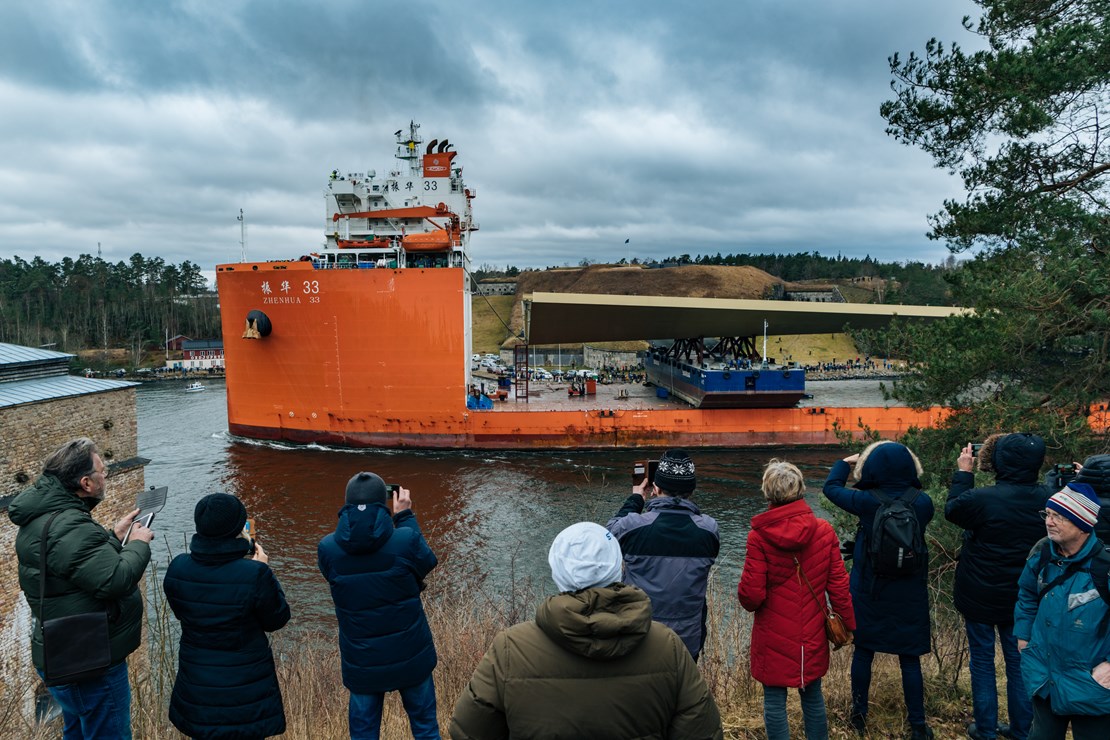 The Zhen Hua 33 traveling through the Stockholm archipelago. Skanska has climate compensated this transport through a UN-approved body.

Work on the bridge has been ongoing for almost five years. How does it feel now that it is soon in place?

“Extremely well!” says a smiling David Karlsson. “I have been there in China and gotten to know this bridge, so I know what is coming. When you stand next to the bridge and you are so incredibly small in comparison. It will be great when the bridge arrives and we can finally complete the work.”

The new bridge will be inaugurated on August 23, 2020, after it has been painted a distinctive golden color to harmonize with surrounding buildings. Pedestrians, cyclists and drivers will all find the bridge welcoming to them. 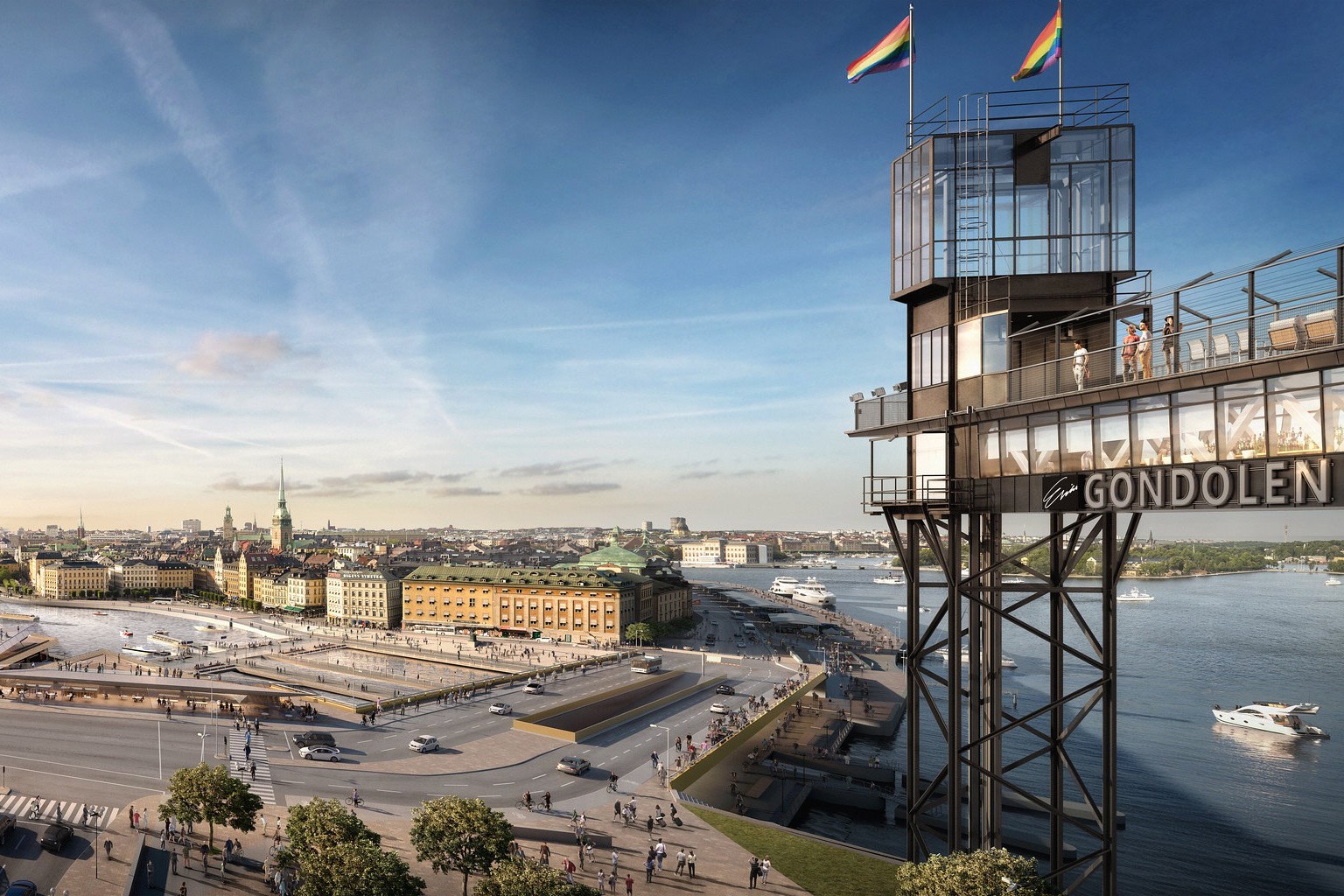 The overall Slussen project will better connect Stockholm and provide the city with a more secure drinking water supply. Also, it will be a more compelling place for people to meet.