How Ikea’s Ingvar Kamprad assembled a new approach to housing

Ingvar Kamprad not only founded furniture giant Ikea, a Swedish icon, but he was integral in developing the innovative BoKlok affordable housing concept, jointly owned by Skanska and Ikea. With Ingvar’s passing at age 91 on January 27, we reflect on this other important contribution to society.

By introducing furniture that was stylish yet affordable, sold through giant blue-and-yellow stores and ready to be assembled at home, Ikea transformed how the world shops for furniture. Still, Ikea founder Ingvar Kamprad went beyond décor to help the average person have a better life. Together Skanska, Ingvar and Ikea created a new way of producing – and of thinking about – homes.

It’s called BoKlok (Live Smart). These affordable, modern homes are meant for the multitudes. More than 11,000 BoKlok homes have been produced over the last 21 years, nearly all in the Nordics.

BoKlok homes are sold at Ikea stores, and developed and built by Skanska. They follow the Ikea model of large volumes, low prices and industrialized production. And they set a high standard: the homes are full of light through big windows, use natural materials such as wood, and have well-planned lay outs and highly energy efficient designs. BoKlok homes are cozy, not flashy.

Homes affordable for many people

It all started in the 1990s, when most new homes in Sweden were priced out of reach of ordinary people. Ingvar Kamprad and then-Skanska President Melker Schörling decided to create quality homes aimed at the large and overlooked segment of the market. These were homes for nurses, sales clerks, single parents and young families still at university.

BoKlok’s guiding point became the question: "How much can a single nurse with a child afford to spend on a home?" The answer was about SEK 3,000 at the time, about USD 380. That was the standard on which all other decisions were based. 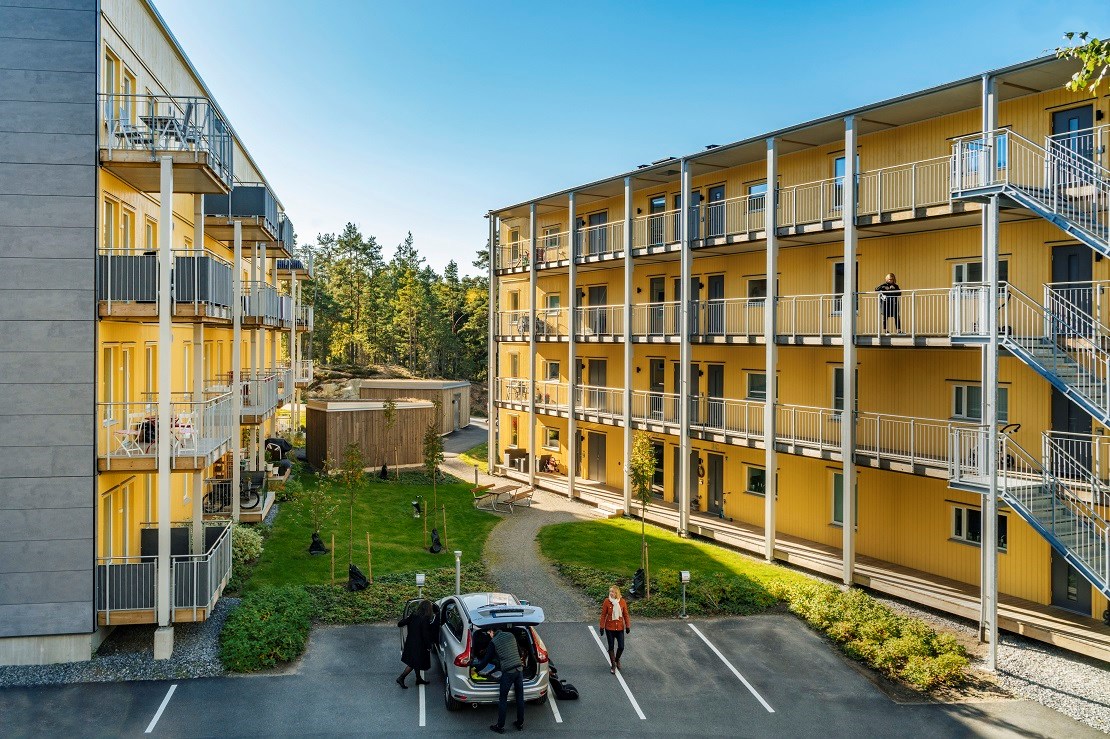 Skanska’s Inger Olsson was one of the three people charged with making their vision a reality. At the time, it was a daring approach. People questioned if standardized designs would dull the appearance of communities, and if a modular approach to construction would really work. Inger recalls how Ikea’s Ingvar set high standards and inspired people through his clear leadership. As BoKlok had Ingvar’s commitment, the team was determined to find a way to make it succeed.

The first BoKlok development opened in 1997 near Helsingborg, in southern Sweden. Ingvar attended the first ceremony, and Inger recalls him walking around asking homebuyers, "What can we do better?"

Not much - people liked BoKlok just the way it was. The first BoKlok homes were a success, generating rave reviews in the daily papers as well as top design magazines.

BoKlok – jointly owned by Skanska and Ikea – produces about 1,200 homes a year, mostly for Sweden but also Norway and Finland.

At a seminar tied to that opening event, Ingvar reflected on BoKlok and its purpose.

"The vision is to create affordable homes for the many," the Ikea founder said more than 20 years ago. "People should be able to pay for their homes themselves. It’s much better than subsidies in the long run. Our challenge will be to keep the low price level."

These days, the need for affordable housing in the Nordics is as great, if not greater, than before. BoKlok – jointly owned by Skanska and Ikea – produces about 1,200 homes a year, mostly for Sweden but also Norway and Finland. To provide even more people with the opportunity of homeownership, the main production plant is being expanded to increase capacity by almost 50 percent.

BoKlok’s focus remains on providing stylish homes affordable for people with ordinary incomes. And now it is helping even more people. With H.M. Queen Silvia of Sweden and her foundation, Ingvar Kamprad played an important role in creating a special model of BoKlok – SilviaBo – for seniors and people with dementia.

“In my work today, I still get inspiration from him,” Skanska’s Inger Olsson says of Ingvar Kamprad.

Inger Olsson of Skanska says that Ingvar was ahead of his time in seeing how businesses can help society. When he was active in business, such thinking was rare.

"He really wanted to make the whole world better for the many people," Inger reflects. "Maybe that is the most important thing he has done."

She concludes: "In my work today, I still get inspiration from him."

Affordable homes for many people

BoKlok is the affordable residential concept jointly owned by Skanska and Ikea.